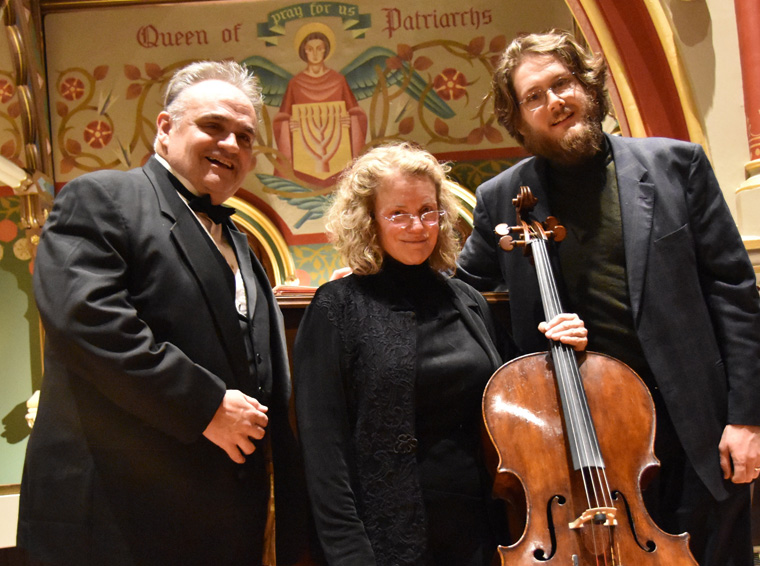 The Cathedral Concert Series began Nov. 8 on a night that gave glory to music and family.

Powerful baritone Todd Thomas is the uncle of organist Philip Fillion, and cellist Lindsay Groves figured that her cello is very compatible with Thomas’ singing voice.

“I love making music in Syracuse,” Thomas told the audience in the Cathedral of the Immaculate Conception. “You have a great musical town. I’ve been here several times.”

The concert was organized by Father Joseph Clemente and the cathedral’s music director and organist, Alan Lynch.

“I think it was a wonderful combination of artists that put together a very unique sound and played together like they have been playing together all their lives,” Father Clemente said.

“And it was so cohesive and that’s what created such beauty in this space — the cohesiveness of their playing together.” 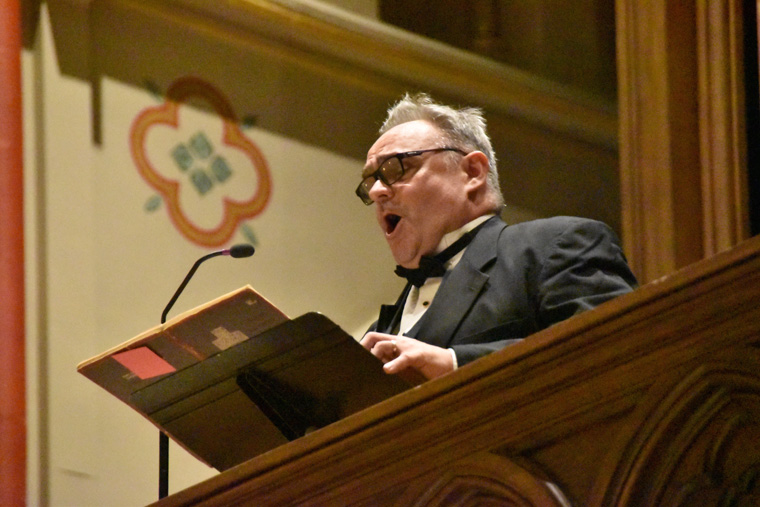 Baritone Todd Thomas sings with a fire that befits his international reputation. After the concert, he along with cellist Lindsay Groves and organist Philip Fillion personally thanked every attendee on the way out.

He cited the musicians’ power and emotion, and he added: “There were several times when the crowd wanted to stand and applaud.” The crowd did so at the end.

Assessing Fillion’s performance on the cathedral’s Roosevelt-Schantz Organ, which was built in 1892 and restored and added to in 1980, Lynch said:

“I thought he was wonderful. It’s always interesting here. New organists come, play this organ, because everyone has such a different way, different approach to the instrument. It’s a large instrument, and you can use it different ways.

“And his accompaniment was fabulous; he never covered over the singer, and cello and baritone is a great combination with this organ.”

The goal of the new concert series, Lynch said, is to feature sacred music that doesn’t compete with Symphoria or with any other local musical organization. The series will feature sacred and secular music and renowned performers who do justice to the beauty of the space.

After Thomas sang one of the Five Mystical Songs, V. Antiphon, an attendee in a pew was heard to say: “That’s the best I’ve ever heard it done.”

An internationally traveling opera singer, Thomas is originally from Elmira, in Chemung County in the Southern Tier, and he goes back there every year to give a concert that supports a scholarship in his name; the scholarships go to outstanding high school seniors in the county. 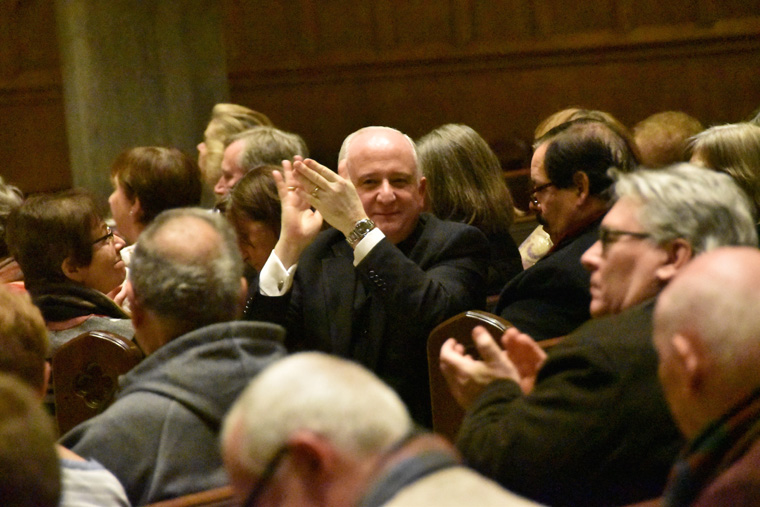 Father Joseph Clemente applauds the performers at the Nov. 8 concert. Father Clemente organized the concert along with Alan Lynch, the music director and organist at the Cathedral of the Immaculate Conception.

His website says that Thomas is recognized as “one of the true Verdi baritones currently gracing stages.”

Thomas’ nephew Fillion, the organist, received his master’s degree at Westminster Choir College in New Jersey. Before that he received his bachelor’s degree from Wheaton College in Illinois. Now he is the director of music at St. Mary’s Church in Auburn, Cayuga County.

Cellist Groves lives in Skaneateles. She  has been performing in Syracuse pretty much since college. She has performed with Symphoria, the former Syracuse Symphony Orchestra, and the Washington National Opera, and she also performed in Hawaii.

The next free concert in the series will be “Christmas at the Cathedral” — 7:15 p.m. on Friday, Dec. 6. Music Director Lynch will be playing the organ, and the Cathedral Choir will join with the Onondaga Community College Concert Choir directed by Dr. David Rudari. There will also be a lot of brass instruments, and celebrity readers from the community.