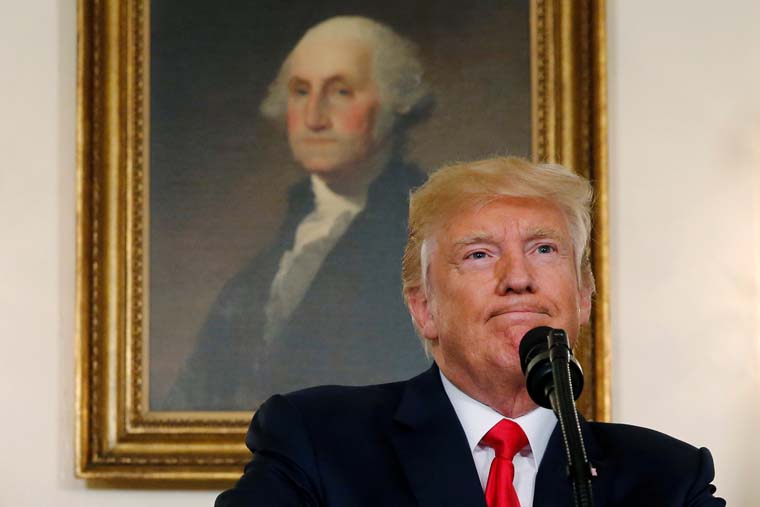 WASHINGTON (CNS) — The chairmen of the U.S. bishops’ committees on international policy and on migration urged President Donald Trump Dec. 5 to reconsider his decision to withdraw the United States from the U.N. process to develop a global compact on migration.

“Participation in that process allows the U.S .to draw on our experience and influence the compact,” said Archbishop Timothy P. Broglio of the U.S. Archdiocese for the Military Services, who is chair of the U.S. Conference of Catholic Bishops’ Committee on International Justice and Peace.

The move came two days before the opening of an intergovernmental conference in Puerto Vallarta, Mexico, to adopt a Global Compact for Safe, Orderly and Regular Migration.

The negotiation process on the compact is based on the New York Declaration for Refugees and Migrants, a nonbinding document adopted by the United Nations in 2016 that lists commitments on refugee and migrant assistance, immersion, education and jobs.

The Trump administration cited American sovereignty as the reason for withdrawing from the migration compact process.

“With a growing global concern about protracted forced migration situations, the U.N. process provides an opportunity for the United States to help build international cooperation that respects such rights and protections on behalf of those seeking safety and security for their families,” Archbishop Broglio said.

In his statement, Bishop Joe S. Vasquez of Austin, Texas, who is chairman of the USCCB’s Committee on Migration, said that Catholic social teaching on migration “recognizes and respects the sovereignty of each nation, indeed each nation’s right and responsibility, to ultimately decide how it will regulate migration into its territory.”

“The church has long articulated that it is the obligation of nations to assure human rights for all migrants and special protections for vulnerable migrants, such as refugees, forced migrants, victims of human trafficking, and women and children at risk,” Bishop Vasquez said.

“Pope Francis has described such obligations as part of building ‘global solidarity’ on behalf of migrants and refugees. In fact, the bishops continue to promote the international campaign initiated by Pope Francis, “Share the Journey,” as a sign of solidarity with our immigrant brothers and sisters,” the bishop added.

Bill O’Keefe, CRS’ vice president for government relations and advocacy, said the U.S. withdrawal from the migration compact process “does not reflect the values of the American people who want governments to uphold the rights and dignity of migrants, as well as solve the complex problems that force people to migrate in the first place.”

“Fixing the broken global system for managing migration would protect innocent families, reduce human trafficking, and ultimately allow people to choose to stay where they are,” O’Keefe said in a statement.

The U.N. 2016 declaration calls on sovereign nations to cooperate to minimize harms — including exploitation and physical violence — carried out against those vulnerable migrants who flee.

Citing the United Nations, CRS, the U.S. bishops’ overseas relief and development agency, said that governments and civic leaders have been discussing the content of the final 2018 global compact, so that, “migration, like other areas of international relations, will be guided by a set of common principles and approaches.”

In his statement, O’Keefe said the United States “should lead the world to address the needs and problems of migrants in ways that are orderly, fair and compassionate.” He also said a global compact on migration is “an important step to stem human trafficking.”

“It also would address other forms of exploitation, while addressing the root causes of migration, helping people find the security and opportunity that they need to stay home as almost all of them want to do,” he added.

David Robinson, executive director of Jesuit Refugee Service/USA, said the agency was “saddened and disappointed” at the administration’s decision, saying it is “turning its back on life-saving cooperation with other nations.”

“Jesuit Refugee Service/USA is committed to Pope Francis’ vision of the full embrace of migrants and refugees — to welcome, to protect, to promote, and to integrate them — and to global cooperation that works towards this vision,” he said. “We encourage everyone, especially those compelled by the teachings of the church and of the Holy Father, to join in building compassion and welcoming for migrants and refugees.”

At the opening ceremony for the Puerto Vallarta conference, Pope Francis in a videotaped message invited everyone, individually and collectively, “to welcome, protect, promote and integrate” migrants and refugees as part of a global common response. He called on those working on the global migration compact to be inspired by “compassion, foresight and courage.”

In his remarks to the conference, Archbishop Bernardito Auza, the Vatican’s permanent observer to the United Nations, said the “right to migrate, whether in times of crisis or stability, must be recognized and respected.”

“Strong and careful consideration must be given to bilateral, regional and international agreements and processes for the protection and the best interest of migrants as the basis for international cooperation in the global management of migration,” Archbishop Auza said.

“The centrality of the human person obliges us to treat every migrant with dignity and respect,” he said, adding that Pope Francis has summarized the most crucial issues the global compact must address in four verbs: “to welcome, protect, promote and integrate.”