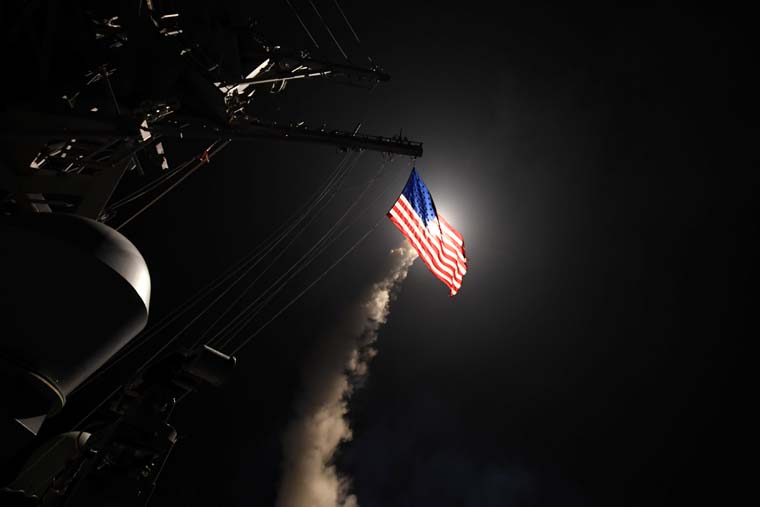 WASHINGTON (CNS) — Two prominent Catholic leaders in Syria criticized the U.S. missile strikes against their nation, wondering why they occurred before investigations into the origins of chemical attacks reported April 4.

“No child of God should ever suffer such horror,” he said April 6, announcing that he had ordered the strike against the air base from which he said the chemical weapons attack was launched.

Syriac Catholic Patriarch Ignace Joseph Younan called the attack an aggression and told Catholic News Service: “It is a shame that the United States administration didn’t wait until an honest United Nations investigation was thoroughly made into what is said to be a chemical air strike in Khan Shaykun.”

“The agglomerate media and the supremacist policy of the USA just want the killing and destroying conflict in Syria to continue, and this primarily to kill whatever attempt to resolve the bloody crisis,” added Patriarch Younan, who was born in Syria and served for 14 years as bishop of the New Jersey-based Diocese of Our Lady of Deliverance for Syriac Catholics in the United States and Canada.

Bishop Georges Khazen, who serves Latin-rite Catholics in Aleppo, told the Rome-based Fides news agency that he was baffled by “the speed with which it was decided and carried out, without any adequate investigation into the tragic massacre with chemical weapons which took place in Idlib province.”

He said the attack “opens new disturbing scenarios for all.”

In his statement, Trump said, “There can be no dispute that Syria used banned chemical weapons, violated its obligations under the Chemical Weapons Convention and ignored the urging of the U.N. Security Council.”

The president said it was vital to U.S. security interests “to prevent and deter the spread and use of deadly chemical weapons,” and he called on other nations “to join us in seeking to end the slaughter and bloodshed in Syria and also to end terrorism of all kinds and all types.”

“Years of previous attempts at changing Assad’s behavior have all failed and failed very dramatically,” Trump said. “As a result, the refugee crisis continues to deepen and the region continues to destabilize, threatening the United States and its allies.”

“We ask for God’s wisdom as we face the challenge of our very troubled world. We pray for the lives of the wounded and for the souls of those who have passed, and we hope that as long as America stands for justice, that peace and harmony will in the end prevail,” he said.

Syrian officials called the attack a “blatant aggression,” and the General Command of the Syrian army said it “confirms the continuation of the wrong American strategy and restricts the counterterrorist operation that the Syrian army is conducting.”

The Syrian state news agency SANA reported nine civilians, including four children, were killed in the U.S. attack. SANA said the civilians died in villages near the airbase and that seven more people were wounded.

It was not clear whether this figure included any of the six dead announced by the Syrian army earlier.

Patriarch Younan, who said he passed Shayrat Air Base after the strike, en route to celebrate a funeral in Hafar, noted the U.S. was accusing Syria — a U.N. member — of using chemical weapons, but had not investigated the charge.

“The Syrian army was fighting successfully to end the bloody conflict going on for long. It did not need any military intervention that would be condemned by international agencies, such as using chemicals,” he said. He added that Christians would suffer the consequences, and the final results of displacement and persecution would not be known for decades.

After the chemical attack was reported, Chaldean Bishop Antoine Audo of Aleppo told Fides that although he understood things were not always what they seemed, he could not imagine the Syrian government “is so naive and ignorant to be able to do such ‘errors.’”

He said the Syrian government and opposition continued to blame each other for the 2013 chemical attack in the suburbs of Damascus.

“Two days ago, U.S. President Donald Trump said that Assad is part of the solution of the Syrian problem. Now he makes statements that say the contrary,” Bishop Audo told Fides. “There are interests of regional powers involved in the war. We should always take this into account, especially when certain things are repeated with similar dynamics, and trigger the same reactions and the same effects already experienced in the past.”