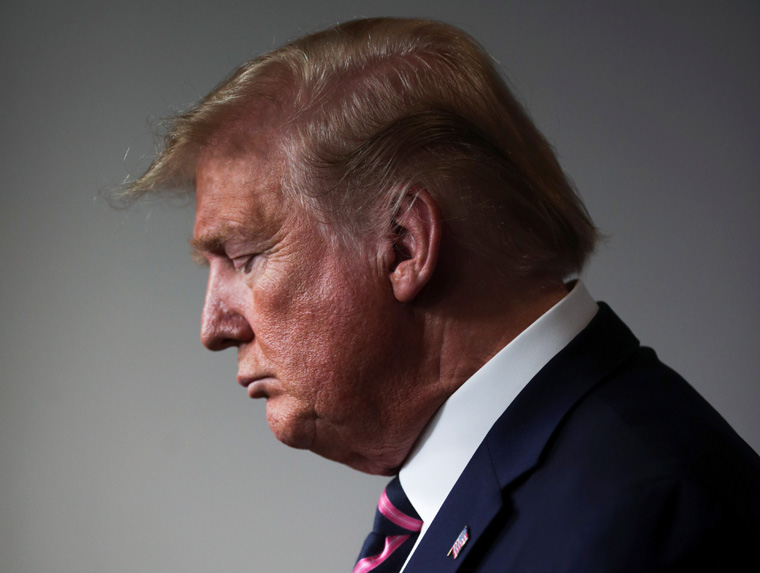 WASHINGTON (CNS) — President Donald Trump said he would continue to support issues vital to the Catholic Church, especially abortion, religious freedom and school choice, in a conference call with Catholic leaders and educators.

He also said he would seek federal financial support for Catholic schools as they confront the coronavirus pandemic.
Many schools across the country have sustained severe financial stresses since the pandemic emerged in the U.S. in February, according to the National Catholic Educational Association.

Crux, an online Catholic news organization, reported on the April 26 call after obtaining a recording of the event.
Trump described himself as the “best (president) in the history of the Catholic Church” to the 600 Catholic leaders and educators, according to the report.

Throughout the call, Trump repeatedly returned to his support of efforts to stop abortion and school choice while saying that a Democratic presidency could lead to an opposition in the government to those Catholic concerns.

Among those on the call were Cardinal Timothy M. Dolan of New York, Cardinal Sean P. O’Malley of Boston, Archbishop Jose H. Gomez of Los Angeles, president of the U.S. Conference of Catholic Bishops and Bishop Michael C. Barber of Oakland, California, chairman of the bishops’ Committee on Catholic Education.

Educators identified as being on the call were Paul Escala and Elias Moo, superintendents of Catholic education in the archdioceses of Los Angeles and Denver, respectively.

The Archdiocese of Denver emailed a statement from Moo April 28 in which he said he explained to the president the ministry Catholic schools in Colorado and the challenges Catholic education faces because of the pandemic.

“I spoke to the president about the long history of Catholic education in our country, and how our nation needs schools that provide an educational experience that forms the whole child and values the primacy of parents and of the soul of the human person,” Moo said. “I also told him of the phenomenal job our Catholic schools across the Archdiocese of Denver are doing in serving over 12,000 students from a diversity of backgrounds, cultures, countries of origin and economic situations, at three-fourths the cost per student of our public-school counterparts.”

He also said it was important for the church “to engage with public officials to discuss the issues that are central to our Catholic faith and mission,” regardless of an individual’s “political affiliation or preference.”

None of the other participants could be reached for comment. However, one participant, Mary Pat Donoghue, executive director of the Secretariat for Catholic Education at the USCCB, declined to comment in an email to Catholic News Service, saying the call was “off the record.”

As he discussed his support of Catholic issues, Trump noted that Secretary of Education Betsy DeVos and Secretary of Housing and Urban Development Ben Carson also were on the call.

Trump repeatedly stressed to the participants his commitment to pro-life cause, saying it has “been at a level that no other president has seen before, according to everybody.”

In January, Trump became the first sitting president to address the annual March for Life in Washington, which protests the 1973 U.S. Supreme Court decision legalizing abortion.

The president also reiterated his support for the Mexico City policy, which bars federal funding for nongovernmental organizations that provide abortion and opposition to the Johnson Amendment, which prohibits tax exempt organizations, including churches, from supporting or opposing political candidates.

The president’s remarks lasted about 15 minutes before he fielded questions.

The topic of federal support to prop up Catholic schools was the primary concern expressed by participants. The need is particularly acute under the pandemic even though some schools have obtained forgivable Small Business Administration loans under the new Paycheck Protection Program.

The loans are primarily meant for entities with less than 500 employees, including nonprofits such as schools and churches, so they can keep staff employed for up to eight weeks. Catholic school administrators nationwide face major questions as they prepare for the new academic year, however, because of the potential loss of tuition from families whose wage-earners have suffered layoffs and the high expense of converting in-person classes to online learning.

Cardinal Dolan was the first participant to speak, according to the Crux account. He welcomed the support of DeVos, Carson and Kellyanne Conway, a senior adviser to Trump, calling them “cherished allies in our passion for our beloved schools.”

He stressed to Trump that the outlook for schools never “looked more bleak, but perhaps never has the outlook looked more promising given the energetic commitment that your administration has to our schools. We need you more than ever.”

In response, Trump turned to his reelection campaign, saying the “situation coming up on Nov. 3, the likes of which have never been more important for the church.”

He then said Democrats “want abortion.”

“We did very well defending that during our last race with Hillary Clinton because she had it right up until the time of birth,” he said. “We probably helped out the pro-life (effort) more than anything you can imagine.

“I hope that everyone gets out and votes and does what they have to do,” he said in reference to the November election, warning that if he is defeated, “you’re going to have a very different Catholic Church.”

Cardinal O’Malley continued the line of questioning related to schools, urging the president to support tuition assistance for families to enable them to send their children to Catholic schools.

“We need it now,” he said. “It has to be done in a quick way that helps them to pay tuition.”

Crux reported that Escala and Moo urged the president to pursue policies that support school choice.