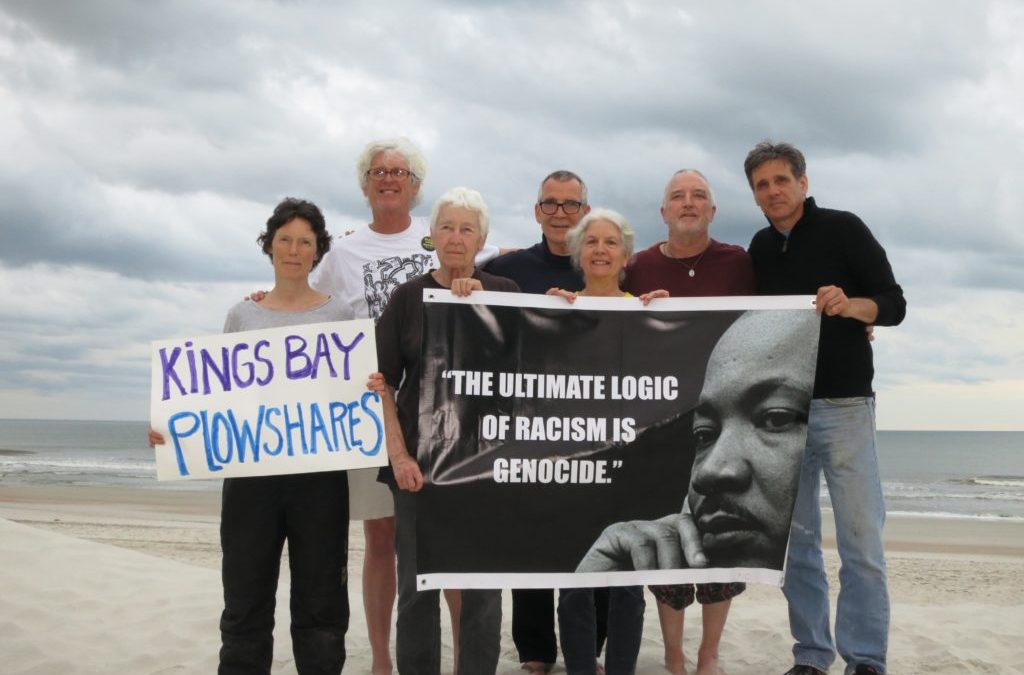 Calling themselves the Kings Bay Plowshares, seven Catholic peace activists were arrested at Naval Submarine Base Kings Bay in Georgia April 5, 2018. The protesters said they took the action to mark the 50th anniversary of the assassination of the Rev. Martin Luther King Jr. and to repent for the “sin of white supremacy” that guides U.S. military policy. (CNS photo | Kings Bay Plowshares)

Moments after a federal jury convicted seven Catholic peace activists for breaking into a nuclear submarine base in Georgia, the defendants and dozens of supporters sang and danced. “Rejoice in the Lord, always, again I say rejoice,” they sang Oct. 24 outside U.S. District Court for the Southern District of Georgia in Brunswick, Ga.

The Kings Bay Plowshares 7 — including two activists with ties to Central New York — were all convicted of three felonies and a misdemeanor. They were charged with conspiracy, depredation of government property, destruction of government property, and trespassing. They are expected to return to court for sentencing in 60 to 90 days and each face up to 25 years in federal prison, according to Bill Quigley, who represented Elizabeth McAlister.

The seven were arrested early April 5, 2018, after they broke into Kings Bay Naval Submarine Base, which houses the U.S. Navy Atlantic Fleet’s Trident nuclear-powered submarines. They hammered on statues of nuclear missiles, poured human blood around the base, and hung banners that decried nuclear weapons.

Their protest was among more than 100 Plowshares demonstrations that followed the 1980 action led by former Syracusans Phil and Dan Berrigan in King of Prussia, Pa. Plowshares actions are inspired by the prophet Isaiah’s call to “beat their swords into plowshares.”

The defendants and their supporters have said they expected the guilty verdict and that the dramatic action was necessary to draw attention to the destructive power of nuclear weapons.

“(The activists) have told the truth, despite the costs,” Quigley, a law professor at Loyola University New Orleans, said at a press conference after the verdict. “They have taken their actions, despite the risk. And they still have consequences to go in their efforts to try to save all of our lives and the lives of our children and grandchildren and the lives of everyone around the world.”

A YouTube video of the press conference shows McAlister, 79, holding hands with her daughter, Frida Berrigan, during the press conference. McAlister’s two other adult children were there, as were her six grandchildren. McAlister, of Baltimore, is the widow of Phil Berrigan (1923-2002), a former Josephite priest and longtime peace activist.

McAlister and Grady participated in the 1983 Plowshares action at the former Griffiss Air Force Base in Rome. They entered the base in the early morning and hammered dents into a B-52 bomber. Both were found guilty and sentenced to federal prison after a trial in Syracuse.

More than 100 supporters from across the country attended or held vigil outside the courthouse during the four-day trial, according to Grady’s sister, Mary Anne Grady Flores, of Ithaca. Despite the verdict, there was much to celebrate, she said.

“We keep joy in our hearts that the witness happened,” she said. “It happened on the base, where the sacramental action happened. They went in where the sin and the crime of the nuclear weapons was so they could expose it.”

The activists again bore witness during the trial, she said. “As Catholics they were doing the Works of Mercy and challenging the works of war,” she said. “They were following their baptismal requirement, which is to follow Jesus.”

The activists had planned to cite the Religious Freedom Restoration Act in their defense. The 1993 federal law says the government may not burden the faith practices of a person with sincerely held religious beliefs. Judge Lisa Godbey Wood ruled before the trial that religious conviction was not an acceptable legal defense in the case, the Brunswick News reported.

Hennessy, the granddaughter of Dorothy Day, also spoke briefly at the press conference. “It’s not over yet,” she said. “The weapons are still there, the treaties are being knocked down one after the next, but we are called to keep trying. We will do this together. We have no other choice.”