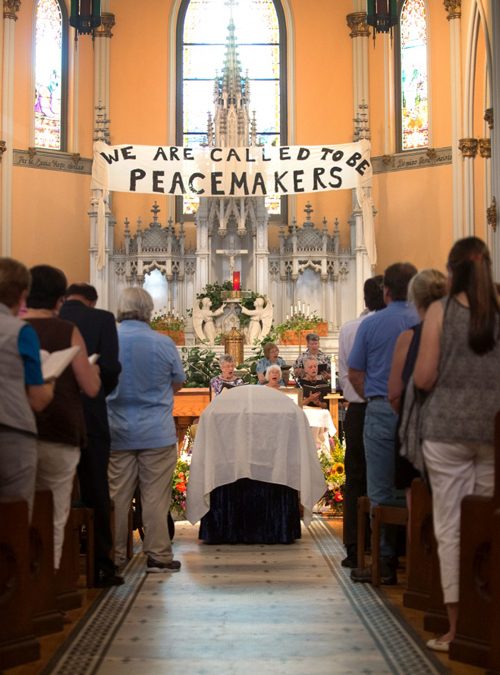 More than 300 people gathered today at St. Lucy’s Church to bid farewell to Jerome “Jerry” Berrigan, a high-profile Catholic peace activist.
“He was first and foremost a peacemaker who lived peacefully, with a hunger for peace and justice,” said longtime Jail Ministry leader Bill Cuddy in his reflection.
Berrigan taught English in Syracuse public schools and at Onondaga Community College before retiring in 2002. He was influential in starting Catholic Worker ministries in the Syracuse Diocese: Unity Acres, Unity Kitchen, Oxford Street Inn and Jail Ministry.
He, like his more famous brothers Daniel and Philip, protested war, beginning with Vietnam, and served time in prison for his acts of civil disobedience. His last arrest was in 2011. Daniel, Jerry’s sole surviving sibling and a Jesuit priest who taught at Le Moyne College, was at the funeral Mass but did not speak during the service.
Berrigan died Sunday at his Syracuse home. He was 95. He is survived by his wife of 60 years, Carol; four children; five grandchildren; and his brother, Daniel.
He was praised as a teacher; a husband, father and brother; and as a Christian.
“He had a way of making people want to be more,” said his daughter, Carla Berrigan. “His faith wouldn’t allow him not to work for peace and justice. He knew he had to put himself on the line because there was no option. He believed, in all his heart and soul, he was his brother’s keeper.”