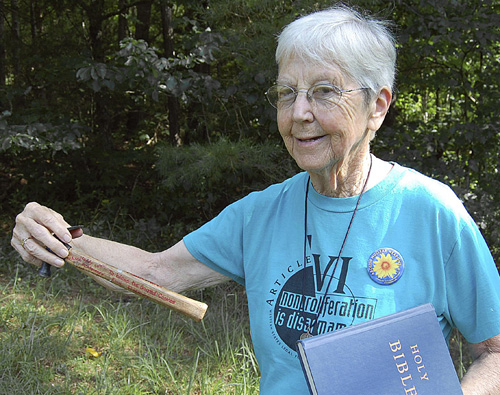 KNOXVILLE, Tenn. (CNS) — Three Plowshares protesters, one of them a religious sister in her mid-80s, were resentenced to time served and two years of unsupervised probation for breaking into a Tennessee nuclear weapons facility in 2012.

The resentencing Sept. 15 was ordered after the 6th U.S. Circuit Court of Appeals reversed the sabotage convictions of Sister Megan Rice, a member of the Society of the Holy Child Jesus from Washington, and military veterans Michael Walli, also from Washington, and Greg Boertje-Obed from Duluth, Minnesota.

Calling themselves the Transform Now Plowshares, the three were convicted in 2013 of the sabotage and depredation of property counts for breaking into the government’s nuclear weapons facility in Oak Ridge, Tennessee, and defacing walls. They were sentenced in February 2014 to 35 months on each count, to be served concurrently.

Thapar had sentenced the protesters in February 2014 to 35 months in prison on each count, to be served concurrently.

All three were freed from prison in May after defense attorneys filed documents with the court calling for the activists’ immediate release. The court agreed after federal prosecutors did not object.

Thapar did not rescind his order that the trio make $52,000 restitution to pay for the damage the government said they caused when they entered the grounds of the facility and walked undetected to a nuclear material storage facility.

The judge set three conditions for the unsupervised probation including that the three protesters must not commit any local, state or federal crimes, may not enter any U.S. nuclear facility and must report any arrests to their probation officer.