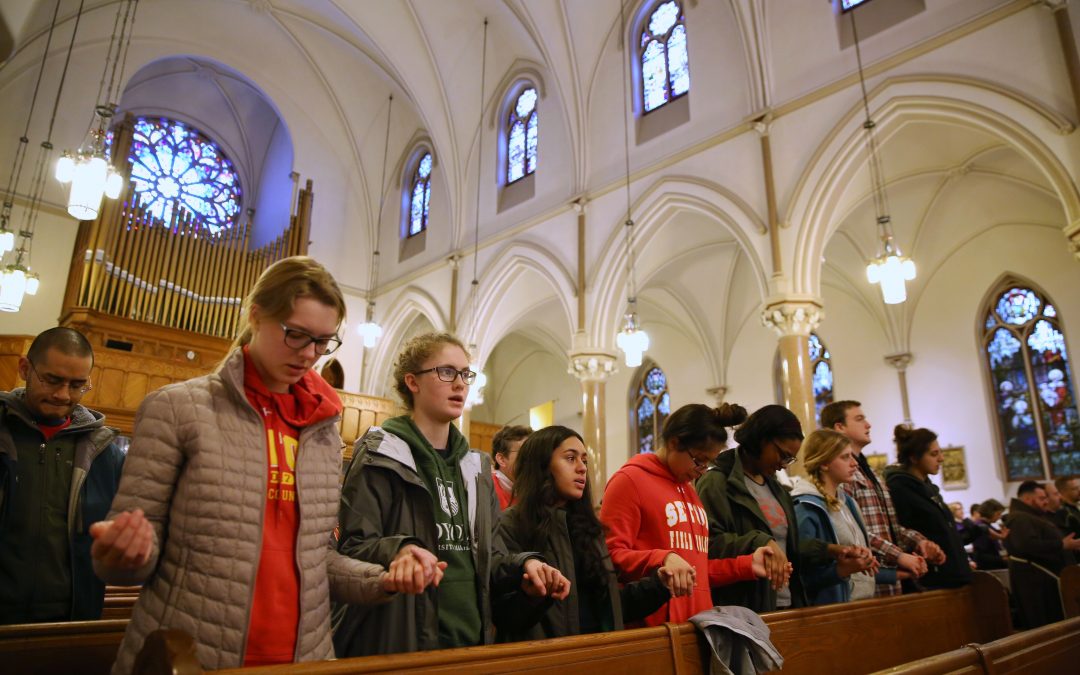 WASHINGTON (CNS) — In the parish hall of Holy Trinity Catholic Church in Washington, elders handed markers to younger members of the parish as they filled in posters with the Gospel-based message from the Book of Isaiah that they wanted others to see at the March for Our Lives event the next day: “And the children will lead us.”

The young Catholics joined the tens of thousands of students from across the country who participated on March 24 in a massive demonstration along Washington’s Pennsylvania Avenue, the main road that connects the White House to the U.S. Capitol, where both houses of Congress meet — the institutions many of them say are to blame for countless young lives lost over the years to gun violence.

The event was organized by survivors and friends of those who died at Florida’s Marjory Stoneman Douglas High School Feb. 14, where 17 died, including an assistant coach and the school’s athletic director. Several more were injured in the latest mass shooting to take place at a school. Those who showed up to the march said they were there to support the march organizers and to applaud their effort.

“They were the spark … finally someone had to do something about it,” said Sofia Alpizar, a student at George Washington University. She was in the pews at St. Patrick’s Catholic Church watching her younger sister Viviana Alpizar and other Catholic school students who had gathered for reflection and Mass before taking to the streets.

“Don’t let his march be the only thing you do,” Viviana Alpizar implored, as other students shared some of the reasons why they were participating.

Stephon Wheaton, a 17-year-old from Don Bosco Cristo Rey High School in Takoma Park, Maryland, said he was participating because he had lost his best friend, his brother, to gun violence, an event that left him feeling “mad, frustrated and alone.”

J’TA Freeman, a junior at Bishop McNamara High School, told those gathered at St. Patrick’s that she experienced gun violence at age 4, when “somebody brutally murdered my uncle.”

Violence in the streets and violence in schools come from the same source, she said, and something must be done.

“Bullets have no name, they have no race, no gender … they don’t care who you are. They will hit any and everybody,” she said. “We need to take these guns off the streets.”

Referencing the alleged gunman in the Parkland, Florida, school shooting, she said, “It should not be that easy for a 19-year-old male to put a gun into a guitar case, get in an Uber, go to the school” and snuff out lives so easily.

“It is not OK, it should never be OK. After this march, I hope, we will need to take action. The people in charge, they need to hear us,” she said.

It’s “not OK” that parents like hers should have wonder if “I’m going to go to school and I’m going to come back alive or with a bullet wound.”

Others, such as Diego Garcia, a 16-year-old from Chicago’s Brighton Park neighborhood, who organized a group of 50 students from his parish so they would join the Washington march in solidarity with the Parkland students, said he was concerned about the safety of his younger peers.

“I have two brothers and younger friends, I don’t want anything to happen to any of them,” he said.

Though he is not old enough to vote, he wanted lawmakers to hear his voice and his pastor helped him do that.

“I’m not 18 so I thought, what can I do?” he said. “I spoke to my priest and he said, ‘I’ll give you the opportunity to speak.'” By talking to parishioners and making a 34-second video viewed more than 257,000 times, so far, he was able to raise enough donations for all to travel to the march in Washington.

Though older students say they plan to make their voices heard with their votes at the ballot in local and national races, he said he’s encouraging his younger friends that “no matter what age are, you can be a leader in your community.”

It was a message not lost on 12-year-old Samantha Field, a student at Nativity Catholic School in Burke, Virginia, who was holding a sign outside St. Patrick’s that said: “Your right to own an assault rifle does not outweigh my right to live.”

What prompted her to take action, she said, was having a cousin in preschool who had to practice a drill in case of a school shooting and she hoped for a day when children like her cousin don’t have to be thinking about the violence that could befall them in a place that should be safe.

Though students were the protagonists of the demonstration — which saw sister marches throughout the country — many parents and grandparents joined them.

Younger Catholics had the added support of members of their spiritual communities, including priests, and men and women religious, as well as various social justice organizations that showed up to support them

A group from a Franciscan parish in Maryland carried signs during the demonstration, including one with the image of Blessed Oscar Romero, whose feast day fell on the day of the march. Like some of the victims of the Parkland shooting, the Salvadoran archbishop, too, was killed by gunfire on March 24, 1980, while celebrating Mass.

Some bishops took to Twitter to express support for the young participants. Chicago’s Cardinal Blase J. Cupich said via Twitter he was blessing local “youth joining the March for Our Lives in Washington, D.C. Let us listen to the voice of our young people and support stronger gun-safety measures.”

Also via Twitter, Boston’s Cardinal Sean P. O’Malley spoke about the “extraordinary role” of the Florida students “in focusing the mind of the country on this critical social problem” and said it “should be a sign of hope for all of us.”

Catholic mom Liz Mora of Washington said she found hope in the day. She told Catholic News Service she marched “for my children and for all children to have the right to go to school without being harmed by gun violence.”

She said she wanted people of all races and backgrounds “to drive, walk, ride a bike, play in a playground or to stand in their backyard without being mowed down by bullets.”

“I have hope again. Change has already begun,” she said. “Companies are changing their policies and what they sell. Gun owners are speaking up for common sense gun laws. I have faith that our youth will lead us and to show us how to keep this momentum going.”