Catholics turn out to support ‘dreamers’ after DACA rescinded 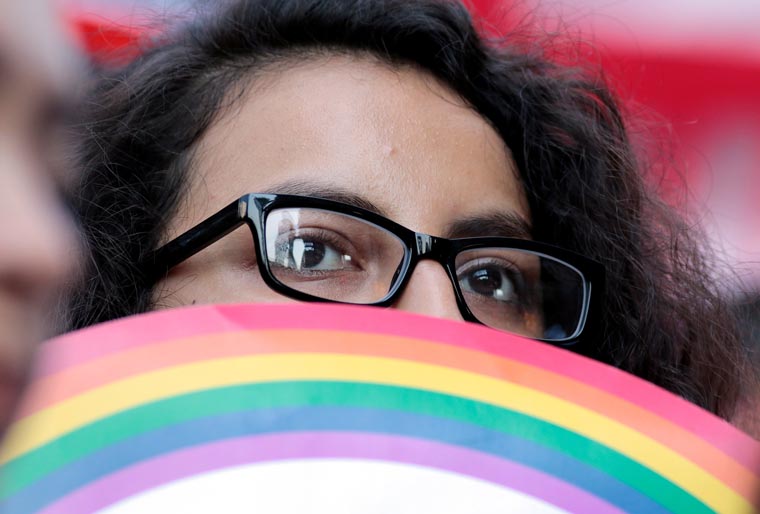 WASHINGTON (CNS) — Mercy Sister Rita Parks stood near the large crowd in front of the White House that was almost silenced after U.S. Attorney General Jeff Sessions announced shortly after 11 a.m. on Sept. 5 that the Trump administration was ending the Deferred Action for Childhood Arrivals, or DACA, program.

“I’m astounded, saddened. I saw their faces, the tears and their dreams shattered,” said Sister Parks, of some of the DACA recipients nearby who were trying to take in the recent news. Many of them, the majority in their 20s, had just heard what they didn’t want to believe: that the program that grants them a work permit and reprieve from deportation, is months away from disappearing.

Some, like Catholic DACA recipient Claudia Quinones, who was in the Washington crowd, had held out hope up until the moment of the announcement that President Donald Trump would make a decision with “heart,” as he had earlier promised regarding the program that allows beneficiaries like her, brought to the U.S. as children without legal documentation, certain protections.

Instead, his attorney general said that by giving job permits to DACA recipients, jobs were “denied … to hundreds of thousands of Americans by allowing those same jobs to go to illegal aliens” meaning the young migrants. Sessions also criticized the program, calling it “unilateral executive amnesty” and said it was responsible for “a surge of unaccompanied minors on the southern border that yielded terrible humanitarian consequences.” However, many organizations have attributed the surge of unaccompanied minors to scaling violence in Central America, not to the DACA program.

Many in the crowd held up signs saying “shame” and pointed them toward the White House after the announcement. Many shouted “Donald Trump, shame on you!”

The Department of Homeland Security, which administers the program, has stopped accepting DACA applications, and current recipients will not be affected until March 5, which Sessions said, gives Congress an opportunity to find a legislative solution for the current 800,000 beneficiaries. On its website, DHS says DACA recipients can continue working until their work permits expire. Those with DACA permits that expire between Sept. 5 and March 5, 2018 are eligible to renew their permits, the website says, but they won’t be able to renew after that two-year extension.

In what can be interpreted as a command, the president tweeted: “Congress, get ready to do your job – DACA!,” kicking the political ball into Congress’ hands. But it’s unclear what Congress can and will do.

“We’re not a political hot potato,” said DACA recipient Greisa Martinez, who is advocacy director at United We Dream, a national immigrant youth-led organization for so-called “dreamers,” as the DACA youth are called. The moniker comes from the Development, Relief, and Education for Alien Minors Act, or DREAM Act, a legislative proposal that has repeatedly failed to pass in Congress and which would give DACA recipients conditional residency. Though a recent bipartisan version of the DREAM Act was once again proposed by Republican Senator Lindsey Graham, of South Carolina, and Democrat Dick Durbin, of Illinois, the president said pre-emptively he would not sign it. So, it’s unclear what he means when he asks Congress to fix the situation for “dreamers.”

Martinez, who was brought from Mexico to the U.S. at age 7 by her parents, said in an interview with Catholic News Service that there’s a lot of uncertainty about what will happen to youth like her but says she’s focused on the fight ahead to “push politicians to better people.”

Her fellow “dreamer,” Quinones, a parishioner at Our Lady of Sorrows in Maryland, said the weekend before the announcement had been “very stressful.” Because of DACA, she has a work permit, a driver’s license and is able to attend college in the area. Now, that’s all up in the air. But DACA youth and other immigrants, as well as other Catholics, have shown a lot of support and that helps, she said.

The crowd in front of the White House was sprinkled with Catholics representing organizations such as the Sisters of Mercy, the Franciscan Action Network, Faith in Public Life, as well as men and women religious out to show their support.

Capuchin Franciscan Father Kevin Thompson of Washington, said he wanted to support the youth, which include many young Catholics at the nearby Shrine of the Sacred Heart, where he is the auxiliary pastor.

He said he would be praying for Catholics who are against programs such as DACA. The Old Testament is clear, he said, in saying that Christians must welcome the stranger.

“I pray for a change of heart,” he said.

Mercy Sister Anne Curtis said she, too, couldn’t understand the opposition of some Catholics against programs such as DACA because from the Christian point of view, “our tradition is so clear,” regarding immigrants, she said, and urged others to “look to the Gospel.”

She said she was particular disheartened with the announcement because the “dreamers” had been led to believe that the outcome would be different.

“My heart breaks,” she said. “The hope they were given and now to have their dreams dashed.”

Kevin Appleby, senior director of international migration policy for the New York-based Center for Migration Studies, joined the crowd in Washington and said the decision was “cruel, as it violates a pledge made by our government to these young people and places them at risk of deportation to countries they do not know.”

“It is sad that the president was unable to summon the moral and political courage to stand by these inspiring young immigrants, who have shown great strength and fortitude in their efforts to achieve the American dream,” he said. “They represent the future leaders of our nation and would contribute greatly to our economy and culture, if given the chance. Instead of firing them, the president should be hiring them. Now it is up to Congress to do the right thing and find a long-term solution to their plight.”

That includes plans for granting them permanent residency and citizenship, he said.

Dreamer Quinones said she’d received much support from church members at the parish level and among those who turned out to support DACA beneficiaries like her during demonstrations but said she would like to see more support from the local hierarchy.

The U.S. Conference of Catholic Bishops called the cancellation of DACA “reprehensible” and said in a Sept. 5 statement that the president’s announcement “causes unnecessary fear” for the youths and their families. The bishops repeatedly called on the president to keep the program. They told DACA recipients on Sept. 5: “You are children of God and welcome in the Catholic Church. The Catholic Church supports you and will advocate for you.”