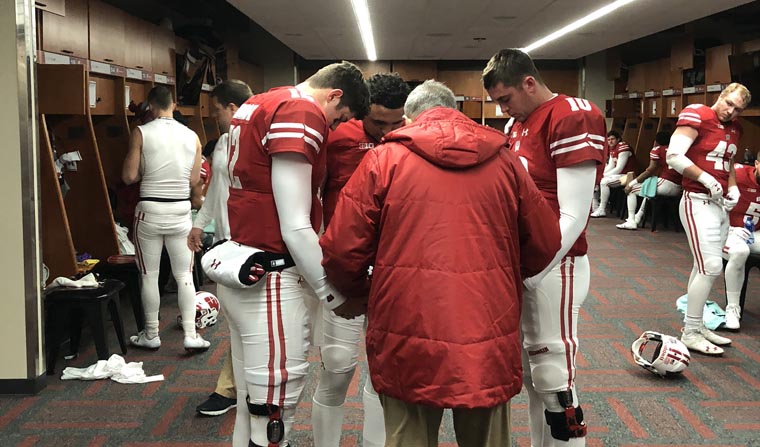 MADISON, Wis. (CNS) — When the Wisconsin Badgers’ football team travels to the Orange Bowl to play Miami Dec. 30, the players will take a 12-1 record with them — one of the best in team history.

Accompanying them will be Msgr. Michael Burke — better known as “Father Mike” to the coaches and players. He has been the team’s chaplain for 40 years.

He began working with the team when he was on the faculty of Madison’s Holy Name Seminary. The Badgers used the seminary fields and facilities for their summer training camp for many years.

Father Mike was a faculty member, rector, and vocation director during the years from 1977 until the closing of the seminary in 1995.

He remembers the training camps well. “The team was usually at the seminary for over three weeks,” he recalled in an interview with the Catholic Herald, newspaper of the Diocese of Madison. “They were locked in and had to stay there the entire time. They certainly got focused, since there were no distractions.”

Father Mike believes he was the first team chaplain in the Big Ten Conference. Now, all but three of the schools’ teams have chaplains.

Throughout his years as chaplain for the University of Wisconsin-Madison team, Father Mike has offered encouragement and support to the coaches and players of all faiths.

He has performed 104 weddings of players and of coaches and countless baptisms. “They still stay connected with me,” he said. “They send lots of pictures.”

“Football is very intense,” Father Mike observed. “The players have to balance going to school, practicing, and keeping their head straight when they’re 18 years old. Many of them have issues with their families.”

He said the current head coach, Paul Chryst, and the assistant coaches let Father Mike know if players have personal problems. “It could be a father who’s in jail or someone in the family has cancer. I can be there to offer support.”

Father Mike said his work with the team is really another parish. “It’s very rewarding,” he said. “They keep me young.”

Father Mike retired in July as pastor of St. Maria Goretti Parish in Madison, where he served since 1996. Since retirement, Chryst told him, “We’ll keep you busy.”

Father Mike prays with players of all faiths before the Badgers’ games, including in position groups.

During the games, he stands on the sidelines with the players and coaches. He wears a clerical collar, and recently at the Wisconsin-Iowa game, he got hit and knocked down by an Iowa player.

He said the Iowa player noticed his collar and said, “Sorry, Father,” and helped him up.

Father Mike said he has been impressed by the spirituality of the Badgers’ players and coaches. He said the players’ parents have noticed the change in their children, with many of them going to church more frequently.

The coaches and players also put their faith into action. This became evident this year when Wisconsin played Florida Atlantic University when Hurricane Irma hit their state.

The Florida Atlantic coaches and players ended up staying in Madison from game day on Saturday until the following Wednesday.

Wisconsin’s athletic director, Barry Alvarez, and his wife, Cindy, along with Chryst’s wife, Robin, and the wives of other coaches, made the Florida Atlantic crew welcome, as did Father Mike himself, who was out every day meeting with the visitors.

“It was impressive to see how we all helped the Florida Atlantic people. Many of them were worried about their families back home.

Some of them wrote me thank-you notes when they got back,” said Father Mike. “It was a win-win situation all around.”

Asked to comment on the Badgers’ best football season ever, Father Mike said, “This year, they are so focused. They are a determined group, care for each other, and work together. I’ve never seen a coaching staff and players who work so well together.”

He believes a lot of the success is due to the strong spirituality among the coaches and players, starting with Chryst, who is Catholic himself and attributes much of his success as a coach to the influence of his father, the late George Chryst, who died 25 years ago.

Ordained a priest in 1974, Father Mike said he has been happy. “I’m so grateful I had the opportunity to do what God wanted me to do. I’ve been blessed with wonderful parents, brothers, sisters and friends. I’ve made so many wonderful friends over the years.”

He retired in July but said he’s busier than ever, ministering at a Catholic high school as well as at a Catholic-run nursing facility and a hospice. And he still makes time to serve as chaplain of the Badger football team.

“It’s been a wonderful experience,” he emphasized.

The Badgers’ coaches and players thinks he’s “the greatest” and hope he stays around for many more years.