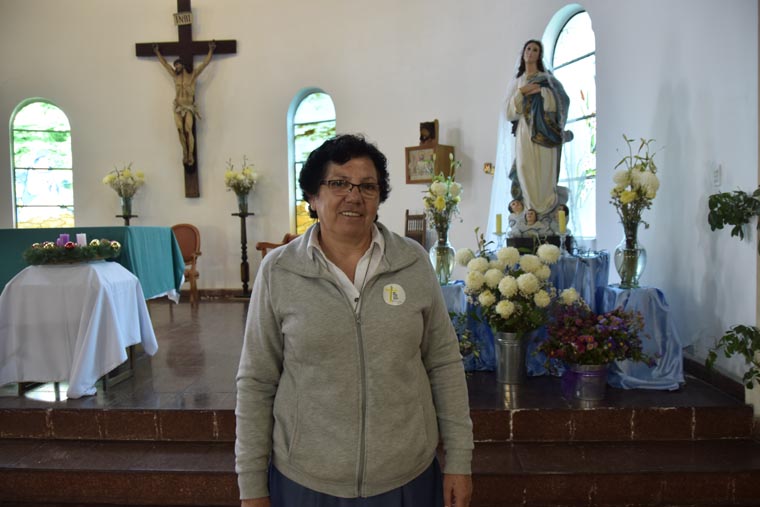 SANTIAGO, Chile (CNS) — For Estefania, an inmate at San Joaquin women’s prison, the hardest part of being jailed is not being able to live with her son.

“Like most of the women here, I was caught trafficking drugs. It is easy money, but you live to regret it,” said Estefania, who asked that Catholic News Service use only her first name.

“I have a 4-year-old boy, and I hate not being able to make his food, be at home with him and take him to kindergarten.” She said she sees her son each Saturday, when he comes to visit with her mother.

“I try to give him the best time I can. He talks to me about how he is getting on at school, we hug each other, laugh together and I make him lunch. But I would love to have him with me all the time,” she said with tears in her eyes.

Sister Nelly Leon, a member of the Sisters of Our Lady of Charity of the Good Shepherd, has been chaplain at the prison for the past 13 years, and she agreed that, for most women, “the most difficult punishment of all is not being able to see their children.”

Sister Nelly is hoping that the situation will change after Pope Francis visits the prison Jan. 16.

“When we heard Pope Francis was coming to Chile, we hoped that he would visit us here, and I was so proud and happy, when I heard that this was the first female prison he has chosen to visit,” Sister Nelly told Catholic News Service.

“Even though there are far fewer women prisoners than men, I think the pope chose us because he wants to highlight their reality and, for 99 percent of the women here, that is being a mother,” said Sister Nelly.

Women can have their children with them at the prison until they are 2 years old; after that, they can only come for visits. It is a big issue that Sister Nelly hopes will be discussed more, because of the papal visit.

Most of Sister Nelly’s day is spent talking to women in the spacious chapel she calls her office. In mid-December, there were candles and Christmas decorations near the altar, and Sister Nelly and her helpers were preparing for a special Mass, where they were to give out presents to the prisoners’ children.

But they also were preparing for the pope’s visit. Inmates at the tables at the back of the chapel were surrounded by brightly colored beads and orange, purple and white paper.

“We are making religious bracelets with little crosses on them,” said Estefania, who has been in prison for two years and has three years left. “We want to make enough for all the women who are in prison and ask the pope to bless them, and then give them to the female prisoners.”

The women also were making white paper doves; each will have the name of a female inmate written on them and will be used to decorate the prison gym, along with brightly colored paper flowers for the papal visit.

The prison chaplain has started a charity called Mujer Levantate (Woman, Get Up), which helps former female prisoners get back on their feet.

“After three years of working at the prison, I realized that many of the women kept coming back here, because they found it so hard to get back into society,” Sister Nelly said.

The charity has a house in Santiago where 10 former female inmates can live for up to a year and, during that time, they get help with finding work and becoming independent. The charity also helps current prisoners get legal access to their children for prison visits, if the father is being resistant. If it is logistically hard to get children to and from the prison, someone from the charity will bring their children to visit.

The prison is divided into different areas. Estefania and 52 other women are in a special Catholic area, which has the chapel and a garden with brightly colored flowers.

“We like it here, because it is much more peaceful that the rest of the prison. We can come to the chapel to pray and be together,” said Estefania.

“Sister Nelly will always listen to our problems and try to help us. I got baptized and took my first Communion when I was in jail,” she added. “I am glad that I have found God. It gives me peace, and I really want to be able to talk to Pope Francis and receive his blessing when he comes.”

Jaime Rojas, director of prison services in Chile, said he is pleased about the papal visit.

While he was checking on preparations, he told CNS: “This is a huge opportunity for us to have such an important visitor here at this prison. It will help people to seek repentance and open their hearts to God.”

But, Sister Nelly is looking for more practical help. Not only does she hope the pope’s visit will highlight the issue of mothers in prisons, she also hopes the government will decide to grant some kind of pardon to some of the mothers in jail.

“I would love to see the government reduce the sentences of mothers with young children and to grant them more access,” she said. “I also want older women and ones who are ill to be able to go home and be at peace with their families.”