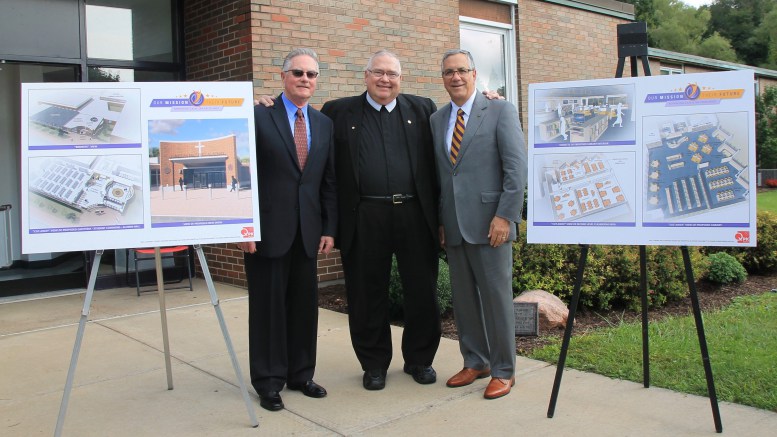 Thanks to early campaign activity, and the generosity of the CBA community, the school has already received pledges that exceed $8 million dollars.

President Brother Joseph Jozwiak, FSC; the Board of Trustees; Principal Matt Keough; alumni; parents; faculty; and students were in attendance to kick off the initiative.

“This campaign will be transformational for CBA, it will propel our school into the future,” Brother Joseph said. “We started this effort a year ago and our campaign team has been working with great zeal. To be able to continue offering an education of this caliber, a community of excellence, and faith-based learning, we are pleased to announce that we are launching an $11 million comprehensive campaign to invest in our treasured school.”

The components of Our Mission, Their Future include a remodeled front entrance; a renovated dining center; enhancements to the performing arts; a new, modern library; new classrooms; and a significant investment in the school’s endowment for financial aid.

The remodeled front entrance will include Alumni Hall, which will feature profiles of CBA’s most prominent alumni, who have made a tremendous impact on the school and throughout the world.

A new student commons will provide a place for students to gather socially. It will connect to an upgraded cafeteria modeled like a college dining center.

The fine arts are a critical component of educating the whole student. In accordance with CBA’s mission, this campaign will make a significant investment in the performing arts allowing the school’s offerings to grow and diversify.

A new, centrally located state-of-the art library will allow access for students, before and after school, and it will transform the way that students engage. There will be collaborative spaces and areas equipped with advanced technology.

Four new classrooms, including an Engineering Lab and Innovation Center, will be built above the library. The Lab will include tools and technology that will bring the CBA engineering and robotics programs to the next level.

CBA’s current endowment fund helps the school to provide more than $1 million in financial assistance every year. More than 40 percent of students at the school receive financial aid. The campaign will increase the principal balance of the endowment fund by $3 million, thus growing the amount of aid available for disbursement every year to those students who need it most.

“This campaign will build on what we are able to offer our students, build on the 118-year history of the institution, and build on the excellence that has always been synonymous with Christian Brothers Academy,” stated campaign co-chair Chuck O’Neil ’65.

Eighth grader Erin Nardella, a member of a third-generation legacy CBA family, and senior Joey Marsallo spoke about the improvements and upgrades to the school.

“The incredible advancements being made to our school are just one example of how CBA aims to provide its students with every chance to be successful,” Marsallo shared. “And, even though both of my younger brothers will experience these new additions without me, I could not be happier for them, along with all of the students of Christian Brothers Academy.”

Honorary Trustee John Murphy ’77 talked about how he “was fortunate to have parents that had a very strong belief in their Catholic faith and the value of education.” Murphy emphasized the importance of ongoing improvements in all areas so future families can have the same opportunities.

“It is very evident why this campaign needs everyone’s support and I am proud to be named a part of it.”

Murphy directed his closing comments to the students, asking them to express their appreciation for those responsible for their education.

“Think about taking a couple minutes out of your day today, and quietly, one on one, find that teacher, staff member, or coach and thank them for their dedication and help. Then, tonight, surprise your parents and family, and thank them for the sacrifice they have made so you can have the privilege of a CBA education, like I have.”

Added Brother Joseph: “Our students are at the forefront of our mission, just as St. John Baptist de La Salle envisioned. We educate them, and shape them, to be model students, and to become model citizens. As members of the CBA family, it is our role to help support and enable them to do just that. That is why we are embarking on this journey, to expand our excellence to extraordinary. That is why we started this initiative, Our Mission, Their Future.”

Christian Brothers Academy (CBA) is Central New York’s premier Catholic, college-preparatory school for young men and women in grades 7 through 12. We welcome qualified students without regard to race, gender, national or ethnic origin or religion. For more information, contact CBA at (315) 446-5960 or visit the website at www.CBASyracuse.org. An Open House for prospective students in grades 7-12 will be held Sunday, Oct. 28, from 1-3 p.m.