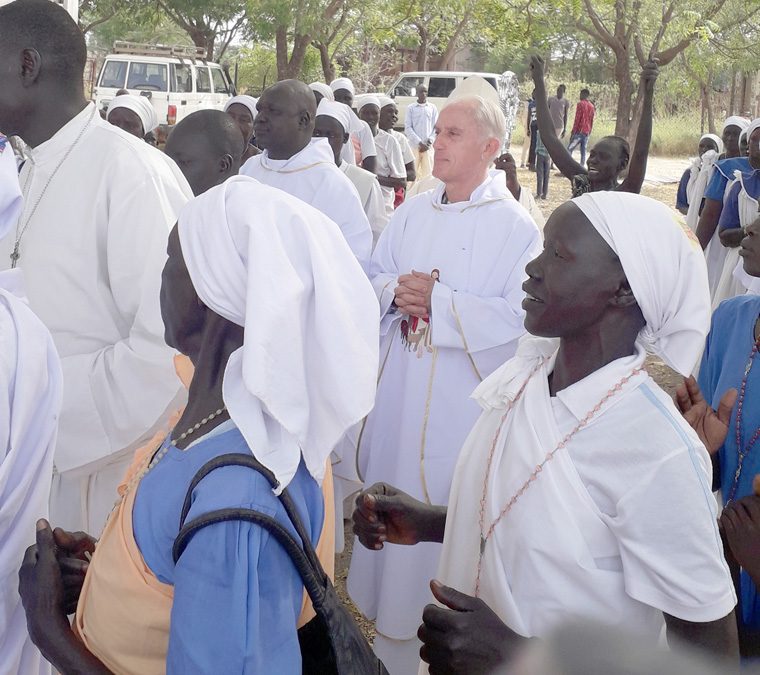 As Christmas approaches, Binghamton native Father Michael Bassano reports a mixture of uplifting events and trouble in South Sudan, where he is the Catholic chaplain in a United Nations Protection of Civilians (POC) camp.

The camp’s population is about 37,000 people, and up to about 3,000 of them are members of Father Bassano’s POC Cathedral Church of Malakal in the area of the White Nile. The people of the camp live very close together in makeshift tents and houses, and the church, too, is a very basic structure.

In recent emails to the Sun, Father Bassano, a Maryknoll missionary, offered greetings to everyone in the Diocese of Syracuse:

“Our people in the camp are preparing their little tents or tiny homes by using dirt, straw, and water to make a new floor and clean their homes. Some will have some money to buy new clothes for the children but most will not have anything new.

“Yet the people’s faith in Jesus who is alive in their hearts fills them with joy and songs of hope for a better future in their lives.”

As the parish began the season of Advent, Father Bassano said, “we had a wonderful gift of the wreath made for us by the UK peacekeeper soldiers who were with us [on a recent] Sunday along with their chaplain, Rev. Nia Williams.

“We are now preparing for the Christmas season. The choir is practicing, the Legion of Mary with mud and straw have redone the floor of our church.

“Our youth will have a Christmas carol celebration on Dec. 15 in the food distribution open area in our camp where they will sing along with speeches of hope for peace which we all desire in South Sudan and throughout our world.”

South Sudan has seen much struggle in recent years. On Nov. 26 this year, the U.S. Department of State — Bureau of Consular Affairs issued this advisory:

“Do not travel to South Sudan due to crime, kidnapping, and armed conflict. … Armed conflict is ongoing and includes fighting between various political and ethnic groups. Weapons are readily available to the population.”

“Something happened [on a recent] Sunday in a town called Bunj which is about 200 kilometers [about 125 miles] from Malakal. A group of armed men in military uniform attacked an NGO compound called Relief International. They robbed the compound, took personal things from the staff, and then took 3 women outside and harassed and raped 2 of them. All the staff was evacuated by the UN and the women treated immediately at the nearby hospital.

“We pray for an end to such violence in this country. May we respect each other made in the image and likeness of God and … respect that the impossible dream of Jesus to live in peace with each other as sisters and brothers may become real. With God all things are possible for us, amen.”

Noting that Nov. 25 was the International Day to Eliminate Violence against Women, Father Bassano reported that 16 days of activism began “here in the camp as well as Malakal town to make people aware of the violence done against women and young girls and to join hands against rape that continues to go on in this country.

“Many of our health NGOs in the camp are raising awareness during these days through workshops and celebrations … that violence against women and young girls must end.

“There is also an awareness campaign to stop child marriage here. A recent UN report stated that 45% of all girls under 18 years of age are pushed or forced into early marriage which is harmful to the development of young girls denying them the right to further education and a better future.

“On Saturday, Dec 7, we will be having a workshop with all of our Catholic youth in the church to talk about these important issues of … sexual violence as well as child marriage. The workshop will be conducted by the UN human rights division in our camp.”

Father Bassano also reported that his parish joined two parishes in Malakal for a Mass on the Feast of Christ the King with the new bishop in Malakal, Bishop Stephen Nyodho Ador Mojwok.

“It was wonderful with over 2,500 people present,” Father Bassano said.

He remains upbeat despite the challenges. Recently, he said, he was listening to music from Man of La Mancha and “was just singing the song ‘The Impossible Dream’ as I went my merry way each day.

“Little did I know that I would be called upon to sing that song at our recent “Malakal’s Got Talent” celebration … Nov 30. …

“I did not sign up to sing as many did. I just wanted to sit in the back and enjoy the show. But during the pauses between acts, the UN master of ceremonies went out into the audience to ask for volunteers to sing or do something. The crowd was shy and after a few moments of silence she said okay, Fr. Michael, you do something.

“Since I had been singing the song ‘The Impossible Dream’ to myself all week I stood up and sang it with full gusto. I was rewarded for my efforts by being given a UN hat and shirt.

“But for me the most important thing was the message of the song that speaks of hope as we dream for better things to come for the people of South Sudan.”

Another happy event in the POC camp was the inter-church soccer tournament that concluded Dec. 3:

“If you try to do your best at anything including sports then God will do the rest. I mentioned also that the most important thing is not the goal in the net but the goal of striving for unity and peace among ourselves that will pave the way for our peaceful coexistence in South Sudan.

“That, I said, is what this tournament has been all about.”

“Everywhere I walk in the camp the children and people are collecting soil in buckets to make new floors in their home to welcome Jesus into their lives and hearts this Christmas.

“On Christmas Day we have a wonderful custom here in the camp. On that special day each family provides some homemade biscuits called kabis to give to children who come to visit their home. Needless to say our children will be full of energy and happy from all the sweets and treats on Christmas Day.

“There is no gift-giving here, just the simple gifts of sweets and biscuits that make people, especially the children, happy.”

Here is his wish for the Diocese of Syracuse:

“As we prepare to celebrate Christmas and the new year to come, may Jesus truly be born in us that He shine through our lives and … that … things change for the better in our lives.

“May the impossible dream of Jesus which is the reign of God truly become a reality in our respecting the earth and one another as sisters and brothers on this earth and thus finding a better way of lasting peace and hope of new life for all people.”

Calling upon you constantly