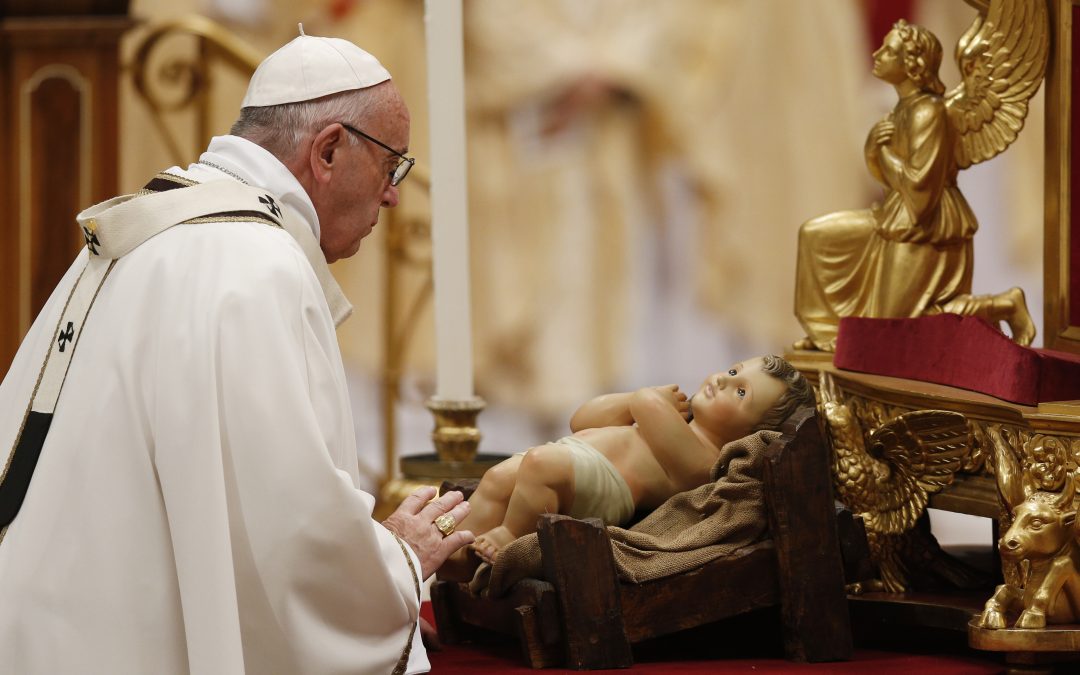 VATICAN CITY (CNS) — Christmas calls believers to see God’s presence where he is often perceived as absent, especially in the “unwelcomed visitor, often unrecognizable, who walks through our cities and our neighborhoods, who travels on our buses and knocks on our doors,” Pope Francis said.

“Christmas is a time for turning the power of fear into the power of charity,” the pope said Dec. 24 as he celebrated Christmas Mass.

The evening silence enveloping St. Peter’s Square was broken by the pealing of church bells following the proclamation of Jesus’ birth during the Christmas Mass.

Pope Francis walked toward the altar of St. Peter’s Basilica, and stood while the cantor sang the solemn “Christmas proclamation,” recounting the timing of Christ’s birth in human history.

He then removed a cloth that revealed a statue of the baby Jesus and gently leaned forward, reverently kissing it.

In his homily, Pope Francis said the “simple story” of Jesus’ birth recounted in St. Luke’s Gospel brings Christians to “the heart of that holy night” and “plunges us into the event that changes our history forever.”

“Everything, on that night, became a source of hope,” the pope said.

While Mary and Joseph’s journey to Bethlehem was full of expectation and hope for the coming birth of Jesus, the pope said, it was also a journey full of the same uncertainties and dangers that await those “who have to leave their home behind.”

In Mary and Joseph’s footsteps, he said, “so many other footsteps are hidden.”

For some people, the departure is filled with hope for the future, he said. “Yet for many others, this departure can only have one name: survival. Surviving the Herods of today who, to impose their power and increase their wealth, see no problem in shedding innocent blood.”

On that Christmas night, he continued, the announcement of “the one who had no place to be born” was proclaimed to poor shepherds — men and women who “had no place at the table or in the streets of the city.”

Although feared and considered “pagans among the believers, sinners among the just and foreigners among the citizens,” the pope said, it was the shepherds who were chosen to receive the good news of Christ’s birth from the angel.

“This is the joy that we tonight are called to share, to celebrate and to proclaim. The joy with which God, in his infinite mercy, has embraced us pagans, sinners and foreigners, and demands that we do the same,” the pope said.

Pope Francis called on all Christians to be “messengers of hope” to those who cast aside in the world, and he prayed that the cry of the little child of Bethlehem would “shake us from our indifference and open our eyes to those who are suffering.”

“May your tenderness awaken our sensitivity and recognize our call to see you in all those who arrive in our cities, in our histories, in our lives,” the pope prayed. “May your revolutionary tenderness persuade us to feel our call to be agents of the hope and tenderness of our people.”