Christopher Ballard is ordained a priest of the Syracuse Diocese 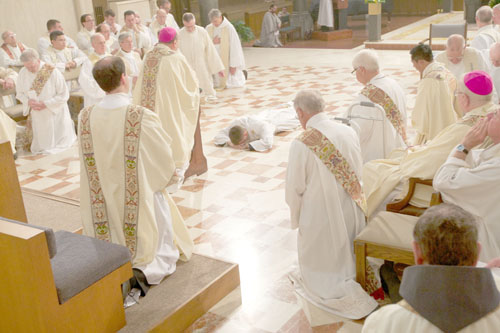 of the Immaculate Conception in downtown Syracuse on June 5, Father Christopher John Ballard was outside in the adjoining prayer park — already submerged in his priestly role. Friends, family members, well-wishers, and a large contingent of parishioners from St. James in Johnson City — where Father Ballard served his pastoral year — wanted to get a blessing from the “new guy.”

The line stretched … well, not for miles, but it surely must have seemed that way to the young man for whom it had formed. Father Ballard’s warm smile and patience never wavered under the heat of the mid-day sun and the weight of the stole he had been presented with just moments previous. His investiture was among the very last steps in Father Ballard’s long journey to ordination. But the formality and pageantry of the ordination Mass contrasted sharply with the less-than-precise realities of the ministry Father Ballard has begun. He is a newly-ordained priest in a world fraught with struggle — representing the church which certainly has plenty of its own.

But there was no mistaking the collective sense of hope and renewal that marked this ordination. Toward the back of the line, enjoying a rare moment when the faithful were not seeking his ear, but rather the attention of the young man he had just welcomed into the priesthood, Bishop Robert J. Cunningham surveyed the crowd and was heartened. “I’m delighted,” he said, clearly savoring the moment. “The ordination of a new priest is always a sign of the Lord’s love and care for his church.”

During his homily, Bishop Cunningham acknowledged the need for a diverse priestly ministry — just as St. Paul acknowledged the “diversity of God’s servants,” and recalled the commissioning of the apostles as shepherds of the people, likening it to the modern priestly role of sustaining Christian communities. Bishop Cunningham also expressed his hope that Father Ballard remain “attentive, joyful, and hopeful” as he embarked on his life in ministry.

“Be a trustworthy servant of God’s love,” Bishop Cummingham said, cautioning Father Ballard not to lead through his own

wisdom “but that which is known through Christ.”

“(The) ordination of a priest is transformative, use it for the Lord’s work,” he said.

Bishop Cunningham also reminded Father Ballard, a native of St. Augustine’s Church in Baldwinsville, that the priestly life is not always easy. “If by chance you are fearful, know that you are not alone,” Bishop Cunningham said. He encouraged him to reach out to his brother priests for counsel and assistance. “No priest is adequately equipped to carry out his mission alone.”

There was, it seemed, no trace of such fear on day one. Earlier in the week Deacon Ballard, 27, had said that he knew in his heart that the priesthood was his true vocation. During the Rite of Ordination, he enthusiastically answered Bishop Cunningham’s call as he was presented to the priests assembled for his ordination, including retired Bishops James Moynihan and Thomas Costello — who was ordained 56 years ago to the day. The congregation responded with thunderous applause.

Later, as the blessings continued, it seemed Father Ballard had already grasped the enormity of the change his life had just taken. “Standing with the other priests of the diocese at the end of the Mass … I definitely felt a change,” Father Ballard admitted, taking a quick sip of water. “At the beginning of the Mass I was sitting in the pew with my family. To end that Mass standing at the altar … it’s a powerful feeling.”

The diocesan priests and seminarians who attended the ordination Mass reveled in the celebratory atmosphere. Father James Lang, Vicar for Parishes, was buoyant as he mingled with the crowd. “Oh, it’s always a joy to welcome a new priest,” he said.

Aside from Father Ballard’s own family members, perhaps none of those attending the ordination were more proud than parishioners of St. James Church in Johnson City.

At the conclusion of the Mass, Bishop Cunningham announced that Father Ballard’s first assignment as a priest of the diocese of Syracuse would be to continue at St. James. The news was met with a spontaneous cheer.

Afterward, waiting for their blessings, John and Cathy Colligan, parishioners and lay ministers at St. James, said they were thrilled that Father Ballard would continue his work at their parish.

“It just seems like home for him,” said John.

The Colligans are among the parish’s 1,800-2,000 members. John Colligan said it is a very diverse group, and a close-knit community. Father Ballard, who prepared for his vocation at Fordham University in New York and St. Mary’s Seminary and University in Baltimore, has already endeared himself to the congregation through his humility and good nature.

“The kids in the parish really like him, and he’s a wonderful role model,” Kathy said.

Father Ballard, who last week said that he knew in his heart that the priesthood was the right vocation for him, couldn’t have been happier with his first assignment. He celebrated his first Mass at St. James on June 6. “Oh, it’s very exciting to return to St. James,” he said. “I know the names, I know the faces and I feel like I will be able to jump right in and get to work.”

Bishop Cunningham said the relationship Father Ballard has with the parishioners of St. James is unique, and truly representative of the Church’s ultimate mission. “The people of St. James have embraced him,” he said. “They were very supportive of him during his ordination process. Of course, the first assignment for any priest is very important. So I was very happy to give him this (assignment).”