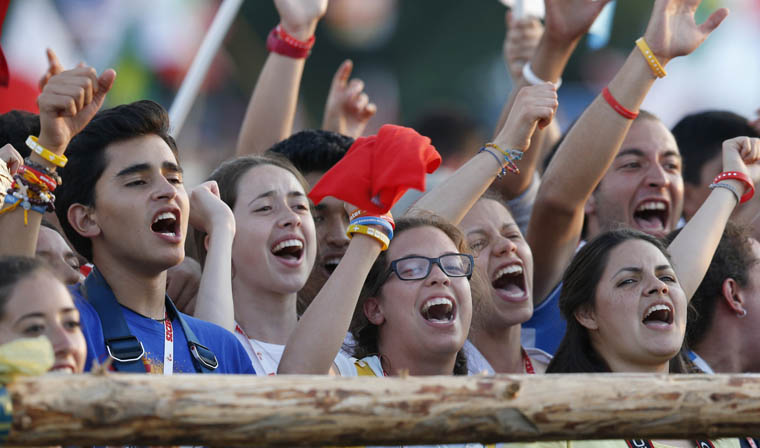 VATICAN CITY (CNS) — Young men and women can live a true experience of the church by joining together and reconnecting with the past, Pope Francis told Catholic young people.

“The genuine experience of the church is not like a flash mob, where people agree to meet, do their thing and then go their separate ways,” the pope said in his message for World Youth Day 2017.

The message, released March 21 at the Vatican, centered on a verse of the Magnificat: “The Mighty One has done great things for me.”

Pope Francis has chosen several verses that reflect on Mary’s faith from the first chapter of the Gospel of St. Luke as the themes for World Youth Day 2017-2019. This year and next, World Youth Day will be celebrated on a local level — on Palm Sunday at the Vatican — and in 2019 it will be an international gathering in Panama.

The pope reminded young people that another event, the Synod of Bishops in 2018, will also help them to reflect on how they “live the experience of faith in the midst of the challenges of our time.”
“It is my hope that the journey toward the World Youth Day in Panama and the process of preparation for the synod will move forward in tandem,” the pope said.

Young people are called to follow the example of Mary who, after saying “yes” to becoming the mother of God, did not remain closed in on herself but went out of her way to help her cousin Elizabeth.

“Mary does not shut herself up at home or let herself be paralyzed by fear or pride,” the pope wrote. “Mary is not the type that — to be comfortable — needs a good sofa where she can feel safe and sound. She is no couch potato!”

Upon meeting her cousin, he explained, Mary proclaims the “Magnificat,” a “revolutionary prayer” in that while she is aware of her own limitations, she completely trusts in divine mercy.

Like Mary, young men and women today also can experience “great things” if they allow their hearts to be touched by God in the “journey of life, which is not a meaningless meandering but a pilgrimage that, for all its uncertainties and sufferings, can find its fulfillment in God,” the pope said.

To look toward the future God has prepared for them, he continued, young people must look to the past and remember God’s mercy and love in their own lives.

“I would like to remind you that there is no saint without a past or a sinner without a future,” he said. “The pearl is born of a wound in the oyster! Jesus, by his love, can heal our hearts and turn our lives into genuine pearls.”

Although he rejected the notion that young people are “distracted and superficial,” Pope Francis said young people today need to reflect on their lives in order to decide their future and not rely on current cultural trends that present a false or incomplete reality.

Social media, he explained, only offers snippets of a person’s memories and history and those glimpses are rarely “endowed with purpose and meaning.” And reality shows present young people with stories that are not real and are “only moments passed before a television camera by characters living from day to day without a greater plan.”

“Don’t let yourselves be led astray by this false image of reality!” the pope said. “Be the protagonists of your history; decide your own future.”

He also warned of giving in to society’s tendency to value the present while dismissing “everything inherited from the past, as for example the institutions of marriage, consecrated life and priestly mission,” which are often written off as “meaningless and outdated forms.”

“People think it is better to live in ‘open’ situations, going through life as if it were a reality show, without aim or purpose,” he said. “Don’t let yourselves be deceived! God came to enlarge the horizons of our life in every direction.”

Instead, the pope said, by appreciating the wisdom and memory of the past and nourishing themselves through the sacraments in the present, young people can proclaim their own song of praise, like Mary, for the “great things” God is doing for their future.

“Spread your wings and fly, but also realize that you need to rediscover your roots and to take up the torch from those who have gone before,” Pope Francis said. “To build a meaningful future, you need to know and appreciate the past.”