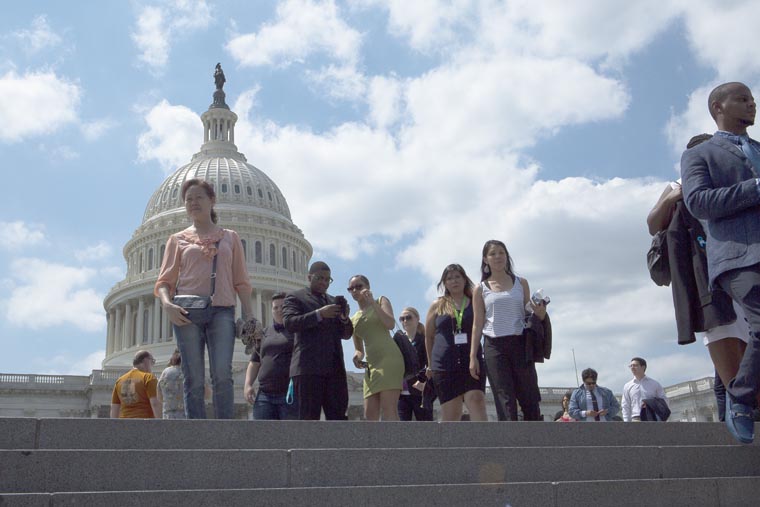 WASHINGTON (CNS) — The executive director of the U.S. bishops’ Migration and Refugee Services gives credit to a group of moderate Republicans in Congress trying to revive interest in Deferred Action for Childhood Arrivals legislation, or DACA, by their efforts to bring not just one bill, but four, to the House floor.

“They are surfacing the issue forcefully and making the House deal with it,” said William Canny.

Although he believes the bills could bring about a “path forward,” he said he is not fully convinced it will happen because of the extent of anti-immigrant sentiment in Congress and the White House.

A current proposal, led by Reps. JeffDenham, R- California, and Will Hurd, R-Texas, along with members of the Congressional Hispanic Caucus, is tapping into an obscure House rule called “queen of the hill” which would bring four immigration bills to the House floor for a vote and the bill with the most votes would pass.

If the “queen of the hill” procedure gets the go-ahead, there will be debate on each of the four bills in the course of one day, followed by votes. Another technicality of this procedure is that discharged bills can only be brought to the House floor on the second and fourth Monday of each month, when the House is in session, which narrows the window for this to happen to June 25 and July 23.

He said the U.S. bishops want Congress to help Dreamers find a path to stay in this country and become citizens “without the fear and stress” they currently live with daily. He also called it “tragic” that DACA recipients — who have been here since childhood and have been educated here — are currently left “to the whims of various courts.”

When President Trump announced last September that he was terminating DACA, he asked Congress to pass a permanent legislative solution for DACA participants. His March 5 deadline has passed and now the DACA battle is in the courts with multiple lawsuits challenging Trump’s decision and seven states filing a lawsuit to try to end DACA.

The four DACA bills that could come up for vote are: Securing America’s Future Act, also known as Goodlatte Bill, written by Rep. Bob Goodlatte, R-Virginia; the DREAM Act; the Uniting and Securing America Act (USA) Act; and a fourth bill that will be chosen by House Speaker Paul Ryan, R-Wisconsin.

The Goodlatte Bill would grant temporary status for DACA recipients with renewable three-year visas and would include stronger border enforcement and legal immigration restrictions. The DREAM Act primarily offers a path to citizenship for DACA recipients and other Dreamers. The USA Act, sponsored by Reps. Denham and Pete Aguilar, D-California, would grant permanent legal status to qualified Dreamers and border improvements.

If the four bills do not come up for House vote, Securing America’s Future Act could come to a floor vote in mid-June but it is said to have little chance of passing in its current form.

Canny said the U.S. bishops have supported the DREAM Act and the USA Act, which have narrow immigration reform, but they are against the restrictions within the Goodlatte Bill, and of course they don’t know what Ryan bill would look like.

Three California bishops placed an ad in a local newspaper May 18 asking House Majority Leader Kevin McCarthy, R-California, to allow a debate and a vote on DACA, specifically the USA Act. The ad, in the form of a letter, urged McCarthy to recognize: “The time to act is now. We have to do what we can to protect these blameless people who were brought into our country when they were only small children.”
In late April, the chairman of the U.S. Conference of Catholic Bishops’ Committee on Migration, Bishop Joe S. Vasquez of Austin Texas, stressed his support for USA Act, saying he hoped Congress would “find a humane legislative solution for Dreamers.”

He said the USA Act would provide qualifying Dreamers with protection from deportation and give them a path to citizenship while also augmenting border security at the U.S./Mexico border, increasing the number of immigration judges and Board of Immigration Appeals staff attorneys.

A May 21 editorial in The Los Angeles Times by Denham, said: “Immigration policy is the responsibility of Congress, and this may be our last chance for a legislative fix before DACA recipients’ lives are upended; if we leave DACA in the courts to languish (or be dismantled) and fail to act in Congress, then program recipients will be left in limbo or, worse, deported to a ‘home’ they never knew.”