City church closes and merges with St. John the Baptist 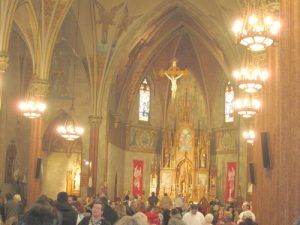 As Lent begins with the promise of the Resurrection, Holy Trinity Church closed with hopes of its people rising again at a new location, St. John the Baptist on Court Street in Syracuse. The final Mass was celebrated Sunday, Feb. 14 and a welcoming Mass was planned for Feb. 21 at Holy Trinity/St. John the Baptist at the St. John the Baptist site. Bishop Robert Cunningham celebrated the final Mass with the church’s administrator Father Jon Werner, Father John Flannagan, Father Joseph Scardella and Father Charles Vavonese concelebrating. Many people of the parish took part in the Mass with one reading proclaimed in German.

Holy Trinity served the German immigrants on the city’s north side. The original church was built in 1891 with the current structure being built just 20 years later. The gothic church is beautiful inside, reminiscent of the older, ornate churches more common during that time period. It sits on Park Street just a stone’s throw from a friendly neighborhood pub and a few shops and markets. The beautiful architecture eclipses the heavy financial burden to maintain its character. Altar stones that used to adorn the altar at Holy Trinity were removed and carried out in a procession at the conclusion of the Mass. They will find a new home at Holy Trinity/St. John the Baptist Church.

Father Werner said the two parishes shared faith formation classes, bulletins, festivals and other events in the months leading up to the closure of Holy Trinity. A group of parishioners have protested the closure for some time, he conceded, but the majority of the parishioners will move forward he hopes, eventually attending the newly formed parish.

“Time is the determining factor really,” Father Werner said. “Most people will give the new church a try. There is an 11 a.m. Mass and many of Holy Trinity’s parishioners were already going to St. John the Baptist because of the Mass time.”

The last Mass was a time of remembrance for the parishioners. The church was packed with people standing in the outside aisles. The choir was splendid and led a touching rendition of “Auld Lang Syne” after the Mass as the parishioners left the building very slowly, many of them pausing to take photos inside the church and chat with old friends.

Chuck Schneider welcomed those who came to the Mass acknowledging the many people who built the parish years ago. His great-grandmother was one of those who approached Bishop Patrick Ludden to ask if a Catholic school could be built in the north side neighborhood. He told her, “If you need a school, you need a church.”  Schneider told the parishioners past and present that “change is hard” and that they were gathering in appreciation of “this great church.”

Even though the church was founded by the German immigrants, it was home to people from all nationalities and all walks of life, Bishop Cunningham said in his homily.

“Holy Trinity has been a place where all could find a home and all could approach the Lord. It has been the House of God and the Gate of Heaven for generations who have gone before us. Its beautiful traditions and most especially the ‘living stones’ that comprise this building, you and all the parishioners who have gone before you, are a source of justifiable pride,” Bishop Cunningham said.

The bishop’s homily recognized the painful reality of the “death” of a parish but his words also spoke of the future and the new life it brings.

“A closing causes pain and suffering,” he said. “But people are good and they reinvest. The Paschal Mystery involves dying and rising. Even in darkness and closures, people find new life and ministries.”

Finding a new way to minister has been a challenge to all the parishes on Syracuse’s north side. The dynamics of the neighborhoods have changed and the demographics along with that. The Franciscan Collaborative Ministries (FCM) are heavily invested in the area serving the poor with its many ministries. Father Werner repeated something that Franciscan friar Father Canice Connors used to say, “We are practicing theology of the ministry of diminishment.”

“We keep cutting back on ministries to keep our buildings open and that means giving into the old way of doing things,” Father Werner said. “Like back in the old Parochial League days, people had a strong identity with their parishes but you can’t sustain that. At the same time, it’s hard to break from that perception. Now we’re asking people to do things differently and we have to find a new way to do things.”

Father Werner said FCM and the Brady Faith Center on the city’s south side provide models of new ways to minister. The outreach they both provide helps the neighborhood and fulfills the mission of the church.

A deacon in formation, Ed Thater thanked the parish at the end of the Mass and said he looks forward to being ordained to the permanent diaconate in May and then joining the people around the altar of the new parish.

The closure was mourned by many in the parish and there were many past parishioners at the final Mass. Many were there to support their parents who were still members and many made the drive to Syracuse from surrounding suburbs. Anna Campanino came to support her parents who came to Syracuse from Sicily in the 1960s. Anna received all her sacraments at Holy Trinity and her mother’s eyes were filled with tears as she asked in a heavy accent, “What will happen to the church?”

At this juncture, the future of the building is yet to be determined. The stained glass windows, marble ornamentation and gold leaf details will remain part of the building while the “living stones” the bishop mentioned in his homily will likely move on to a new place of worship. As Chuck Schneider said in his welcome, “change is hard,” but it is the people who make the parish, not the building.