‘There is laughter in heaven’

Irish or not, eyes were smiling through tears on Feb. 16 as family, friends and 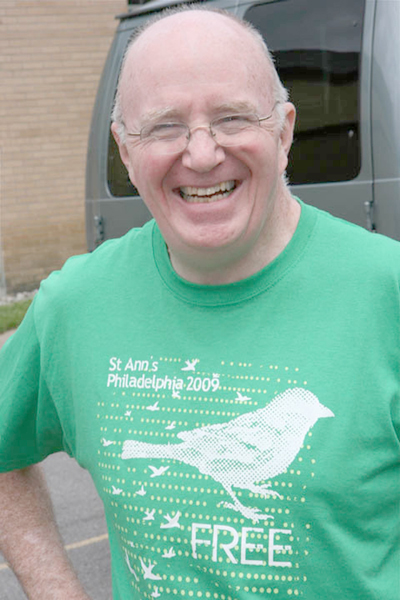 Cars lined the long drive to Immaculate Conception Church in Fayetteville and people filled the pews, poured into the auxiliary chapel and stood along the back windows in order to be there for Father Hannon’s Mass of Christian Burial. Father Hannon was pastor of St. Anne’s Church in Manlius. He was 60 years old.

Many wore green ties and scarves or shamrock earrings out of respect for the priest’s fierce pride in his Irish roots. The Fayetteville Fire Department directed traffic and unfurled a gigantic Irish flag between two ladder trucks for everyone to drive under at the funeral’s end.

Father Hannon was diagnosed with stomach cancer in December and died Feb. 9 at Francis House.

“Some people come into our lives and quickly go, others stay for a while, leaving footprints in our hearts. Today, my friends, you and I have gathered to thank God for the footprints Father Kevin Hannon has left in our hearts,” said Father Michael Carmola, the homilist for the Mass and one of Father Hannon’s closest friends.

Victor Croglio, Father Hannon’s primary care physician, misspoke as he announced those who brought up the gifts. “The offertory will be brought forward by Father Hannon’s sons — I’m sorry, I mean his cousins,” Croglio said as those gathered chuckled.

“He made me say that,” Croglio added, laughing himself.

The laughter was in no way out of place as those who knew and loved Father Hannon gathered to remember him.

“He was full of life, full of love, full of laughter, full of energy, full of fun,” said Father Carmola. “Dr. Croglio, thank you for starting this funeral off with a laugh. There’s laughter in heaven.”

He said Father Hannon cherished and nurtured the childlike aspects of himself, and as a child the propensity for fun — and trouble — were traits which endeared him to teachers and friends at Blessed Sacrament Elementary School in Syracuse.

Father Carmola told those gathered that Msgr. John Heagerty, the priest at Blessed Sacrament when Father Hannon was a student there, remembered him well. “He said if you walked into school and all the kids were lined up, there would be, outside of the line, one kid who had a smile on his face, and you knew something was going on there,” he said.

He told the story of the time when Father Hannon was a boy, and he and a friend went to the Palace movie theater and dared each other to jump off the balcony.

“And off they went,” Father Carmola said.

The owner grabbed the boys and reprimanded them, “but not before Mrs. Hannon got a phone call. One of many, many phone calls.”

His fun-loving spirit was the reason his grades weren’t good enough to get into the seminary after high school, Father Carmola said. But Father Hannon went on to attend Resurrection College in Ontario, St. Mary’s Seminary in Kentucky and St. Peter’s Seminary in Ontario. He worked hard to earn good grades there.

“I asked him what made him decide to become a priest,” Father Carmola said, “And he said, ‘I saw priests and I not only realized that I loved to have fun, but I also had fun when I was doing good for other people. I thought that if I became a priest I would have fun for the rest of my life.’”

But along with the fun was a faith that was unwavering even during the most painful moments.

When given the prognosis that there was no hope and little time left, “his response was, ‘Doctor, I am not afraid to die. There are a lot worse things in life than death,’“ Father Carmola said.

Father Carmolla remembered when he and Father Hannon travelled to Ireland, Father Hannon pointed out a prayer that was etched on some of the gravestones in the cemeteries. “He said, ‘Look at this: After darkness light, after winter spring, after dying life. Yup, that’s what it’s all about.’”

He became excited about what lay ahead for him spiritually, and relied on prayer and his faith in Jesus to see him through, Father Carmola said.

He reminded those gathered of one of Father Hannon’s constant sayings: “Leave your troubles at the altar.”

Bishop Robert Cunningham, who celebrated the Mass, repeated the need for gratitude for the gift of Father Hannon’s life and vocation in the midst of sorrow at his death.

“Father Kevin was a person of inexpressible joy and confident hope,” Bishop Cunningham said. “My hope this morning is that the joy of his priestly life … will be an example, especially to the young people of St. Ann’s on the impact of the life of a good person and a good priest.”

First through sixth graders in the religious education classes at St Ann’s put together a quilt made up of individual squares from each student. They gave the quilt to Father Hannon before he went into Francis House. He treasured it and took great pride in it when visitors came to see him.

His brother priests tucked the colorful quilt around Father Hannon’s body before he was carried down the aisle.

“His last words before he went into a coma were, ‘How am I so blessed that God put so many good people in my life?’” Father Carmola said, nodding. “The last words.”

Father Carmola said he once asked Father Hannon if he was afraid of the moment of judgement before God.

“And he said, ‘Oh my God, I gave up that God a long time ago,’” Father Carmola said to the laughter of those gathered. “And then he winked and said, ‘God is very fond of me.’”