Editor’s note: The following are excerpts of memories students at 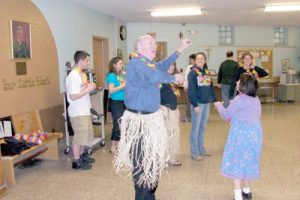 Fayetteville-Manlius High School have of their time with Father Kevin Hannon. The students are all members of St. Ann’s Youth group.

In my group of friends, we had an ongoing battle with Father Kevin with handshakes. He had to have been the strongest 60 year-old man I have ever met. His handshake could make anyone cry. He never lost either, there was no beating him. … There will forever be a spot in my heart for him and I know everyone else feels the same.
— Kyle Greer, Senior

When I think of Father Kevin I remember him riding the superman roller coaster at our annual Darien Lake Trip that he took all of the kids of the church to. He went into it with no fear and had his arms up and was yelling the whole ride. I will always remember him as a very good priest and a very good person.

Every time I would go into the church for Mass or anything and I would see Father Kevin, he would come up to me with a smile and give me a pat on the back asking how my life was, along with my favorite sports team. To me personally, Father Kevin was more than just the priest of St. Ann’s but also a good friend of mine who cared about me.

I remember my confirmation interview with him as if it were yesterday. … He asked me why being confirmed was important to me. I told him that I wanted to be recognized as an adult in the Church and continue my journey. …. He said, “Jill, I can honestly say that you don’t need to be confirmed. You have already made this journey and you are already considered an adult in the Church.” I was in amazement that he said that. … He then said, “See you later.” If I could say one thing to Father Kevin right now, I would say, “This is not a goodbye, this is ‘see you later.’”
— Jill Wilson, Sophomore

One day at Kid’s Camp, where all the local neighborhood kids gathered during the summer, the weather wasn’t looking too great. … Right away Father Kevin stepped to our rescue. With a song in mind he began to teach the kids the hand motions and lyrics to something that is well known at our parish. Father Kevin quickly earned the respect from all the kids (which was a hard goal to accomplish). … As he laughed his contagious laugh, we all noticed the growing patient heart Father Kevin had to teach and help kids find their faith, as he helped me find mine that summer.
— Kaleigh Jacobson, Senior

On our first day [of a mission trip to Philadelphia] we went to a food bank where we put food in boxes so that they could be distributed to the people in need. Father Kevin was in the full swing of it, running here and there, trying to please the woman in charge, Eloise. He would always tease me because I was like him, working hard and trying to please Eloise. When the day ended, he pulled me aside and told me how proud of me he was. I was so amazed that he would say that to me because he is the one who inspired me. … I will never forget Father Kevin and I will always try to live by his example.
— Dante Capriotti, Sophomore

I will never forget how he would say, “Ah! There is my lovely rose of Claire (Clare)” upon seeing me after so many Sunday Masses. He clearly had a special place in his heart for all the teens and children of St. Ann’s. Father never let us forget the loving God who calls us to Him. Out of selfless love and devotion to Jesus, Father Kevin found his place in this temporary life we have on earth. He has forever touched my heart.
— Claire Meyers, Freshman

I have many memories of Father Kevin, but one that particularly sticks out in my mind occurred last summer on our way to Philadelphia for our Mission Trip. Our packed 12-person van was hot under the summer sun, but to make matters worse, the heat turned on every time the van accelerated. … It was then, in our moment of traveling heat, that we got stuck in a traffic jam that would end up putting us two hours behind. To Father Kevin, this wasn’t simply a traffic jam, but an opportunity to socialize. He rolled down the windows, as many others in the traffic jam had, and began talking to everyone.  … I was positive, as we pulled away from each car, that he made an impact on every person he talked to that day.   I don’t know whether or not that traffic jam that day was a message from God, but, looking back, what I do know is that I appreciate every extra minute I spent in that car with Father Kevin that day.
— Abby Boduch, Junior

Father Kevin came into my life when I needed him the most, when my father was dying of cancer. He had just started at St. Ann’s the summer that my dad died. Father Kevin was at our house every day just doing whatever he could to help us. Just his smile could light up the entire room and put a smile on my face. As hard as that time was, he helped me get through it and realize that God has a plan for everyone and this setback in my life was just a bump on the path of life.
… Father Kevin became one of us when he was with us, being our priest along with one of our best friends. He knew just what to say when we needed help or were struggling with something. … He changed my life forever and he will never be forgotten. We love you, Father Kevin.
— Kelsey Clark, Senior

Father Kevin Hannon was the type of person that comes around once in a lifetime.  … Throughout our times together we all grew to love certain songs, one of the songs was The Convent Song. At the end of Mass we will always close with a song, Father Kevin loved this. … During the closing songs Father Kevin would dance around church, getting everyone into the song. He would get up and dance on the pew, this was his personality, and this was what he loved. He was so happy to be surrounded by people who loved him and young kids learning and growing in their faith with God.
— Katie Donlon, Junior