Comparing the attempts to legalize abortion in Ireland and Argentina 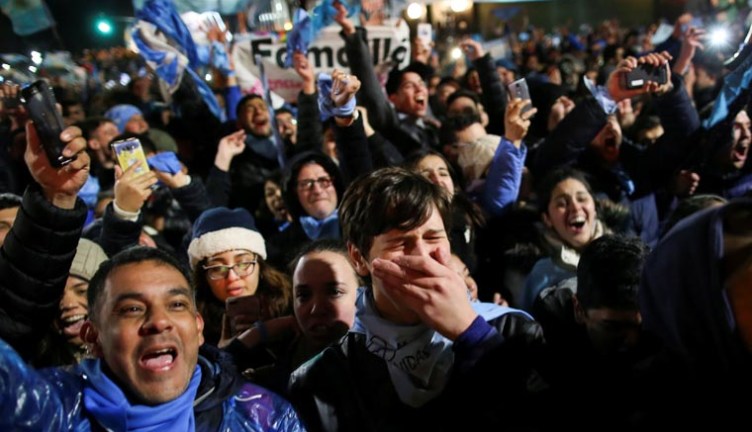 Pro-life advocates react in Buenos Aires, Argentina, Aug. 9 after lawmakers voted against a bill that would have legalized abortion. Argentina’s Senate voted against the bill in the early hours of Aug. 9, dashing the hopes of supporters of legal abortion in the predominantly Catholic country, homeland of Pope Francis. -CNS photo | Agustin Marcarian, Reuters

NEW YORK (CNS) — Early in the morning of Aug. 9, Argentina’s Senate soundly defeated a measure to legalize abortion through 14 weeks of pregnancy. (Their current law permits abortion in cases of sexual violence and to protect the mother’s health.)

The intense debate — both in the culture at large and in the Senate chamber — often invoked a similar process which took place recently Ireland, a country with similarly Catholic roots.

There are many instructive comparisons to be made between how the process played out in these two countries.

Activists for legal abortion — both in Ireland and overseas — used the 2012 death of Savita Halappanavar to begin the end of the Irish Eighth Amendment protecting prenatal children. Though independent inquiries, including the coroner’s inquest, found that Halappanavar died as a result of malpractice related to undiagnosed sepsis, activists pushed the false claim that she died because of the Irish law forbidding abortion.

Media and politicians largely accepted this version of the story. The result was an overwhelming victory for legalizing abortion, with two-thirds of the Irish people voting to repeal the Eighth Amendment and legal protection for prenatal children.

Abortion activists — both in Argentina and overseas — used the 2015 murder of a 14-year-old girl whose boyfriend apparently beat her to death for becoming pregnant to attempt to change Argentina’s law protecting prenatal children.

The difference was that a diversity of views on abortion in the media — and especially the political class — made for an actual debate among those who have power in Argentina.

Abortion activists in both Ireland and Argentina were aided by male chief executives who, while claiming to be anti-abortion, changed their stated views for unclear and possibly dubious reasons. Irish Prime Minister Leo Varadkar campaigned as anti-abortion but shifted his views not only as momentum built to repeal the Eighth Amendment, but also as he became shrouded in controversy when it was revealed many Irish women died of cervical cancer even though his health ministry told them they were in the clear.

Argentina’s President Mauricio Macri, a conservative who described himself as pro-life, nevertheless signaled that if the Senate had voted for the abortion bill he would have let it become law by not vetoing it. The difference in Argentina was powerful pro-life women in the legislature calling out their male chief executive.

Sen. Silvina Garcia Larraburu, for instance, explicitly changed her vote to anti-abortion and accused Marci of attempting to distract from the country’s troubled economy and lack of social support for women. Senator Marta Varela also highlighted the hypocrisy of claiming to be for ‘women’s rights’ while so many women suffer because of abysmal health and social services.

Sen. Silvia Giacoppo called out the euphemism “Voluntary Interruption of Pregnancy” (the name of the motion before Senate), pointing out that “interruption” means that something may be resumed later. Even Vice President Gabriela Michetti came out against the bill.

The New York Times, along with other media outlets, gave the impression that was some kind of entrenched Catholic backlash against a grass-roots abortion rights movement. But eight years ago Argentina became the first Latin American country to allow for same-sex marriage, a move that the Times itself noted the Catholic Church “fought with a vigor similar to its battle against abortion, organizing protests involving thousands of people.” Argentina has already clearly demonstrated it will not simply make law based on whatever its Catholic bishops and other priests say.

By “the world” Amnesty appears to mean the developed West, and their abortion activism, is a classic example of neocolonial imperialism into a culture with a very different understanding of the good.

Groups like Amnesty attempted to inflame understandable worries over the number of deaths from illegal abortion supposedly taking place in Argentina. Another man in support of the law, health minister Adolfo Rubinstein, claimed that 354,000 clandestine abortions are carried out every year, but there is good reason to doubt this number — and especially given that it is about half the total of live births in Argentina. The U.S. is one of the most abortion-permissive countries in the world and has an abortion rate of only one-quarter of total live births.

For context, it may be instructive to recall that one of the founding fathers of abortion rights in the United States, former NARAL president Bernard Nathanson, admitted they simply made up numbers about the numbers of women dying from illegal abortion in order to garner sympathy for their abortion-rights agenda.

Though it is difficult to know how many such deaths are a result of illegal abortion, it is, of course, deeply concerning that Argentina has a maternal mortality rate of 50 per 100,000 live births. Most developed countries have a rate under 10 — except for the United States, which has seen its rate balloon to 26.4.

But to give this number context Argentina should be compared, not to Western abortion-permissive countries, but to countries in the region. Consider that neighboring Chile, which has similarly restrictive abortion laws, has a maternal mortality rate of only 20.5 and actually saw this rate go down after moving to dramatically restrict abortion. This gives credence to the arguments of the female Argentine senators that abortion activism served as a smoke-screen for their country’s genuine problems: corruption and lack of health care and other social services for women.

Circling back to Ireland again, though they had banned nearly all abortions, the Irish maternal mortality rate was a paltry 4.7 — half that of the abortion-permissive United Kingdom, which clocked in at 9.2. That abortion activist groups — including a strong presence from Amnesty International — were even more fervent in pushing their agenda in Ireland raises questions about whether the focus on maternal mortality in Argentina was genuine.

Unlike Ireland, Argentina was able to resist the neocolonial tactics of outside activist groups and stay true to its values. Their courageous example may loom large as similar tactics are used to push abortion rights in other Latin American countries in the coming months and years.