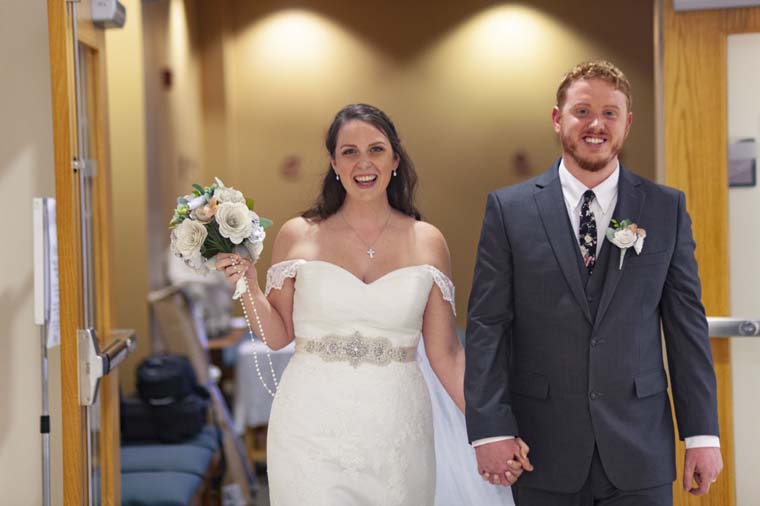 FULTON, Md. (CNS) — As events large and small have been canceled or postponed because of the coronavirus pandemic, Maryland bride-to-be Lauren Fischetti had to make a decision. She was not waiting until mid-April. She was getting married right now.

“We didn’t want to risk there being a mandatory lockdown for everyone in Maryland or everywhere. So, we just wanted to go ahead and get married,” said Fischetti, a high school teacher who wed her fiance Bobby Jones March 20.

Granted, it was a small ceremony. In keeping with the orders from Maryland Gov. Larry Hogan, the ceremony was just 10 people, including Father Peter Gevera, the associate pastor at St. Francis of Assisi Parish in Fulton. The ring bearer and the flower girl had to watch the livestream, Fischetti said.

“The most important thing to us wasn’t the reception. It wasn’t the party, the pictures or anything like that. It was just the sacrament,” Fischetti told the Catholic Review, the media outlet of the Archdiocese of Baltimore.

From weddings to baptisms to funerals, the coronavirus pandemic and the social distancing precautions that go with it have thrown solemn and celebratory Catholic services into disarray.

Following the advice of Maryland’s governor and health experts, Baltimore Archbishop William E. Lori decided March 14 the archdiocese would no longer celebrate Masses in the physical presence of the faithful. Instead, the archdiocese is broadcasting Masses through a variety of media.
Other services such as weddings and funerals may be held with strict limitations, in keeping with the latest guidance from the governor, Archbishop Lori said.

Church, government and health officials hope that these measures, known as social distancing, will help to stop the spread of the novel coronavirus or COVID-19. Officials worry that without social distancing, the number of cases could overwhelm the U.S. health system, causing the death rate to surge.

At Baltimore’s St. Bernardine Parish, Msgr. Richard Bozzelli has been in constant contact with grieving families as public guidelines shifted while they planned funerals for their loved ones.

A funeral held March 17 was originally planned to be no more than 250 people, but that changed when the state-mandated number was lowered to 50 just two days ahead of the planned service. Msgr. Bozzelli had to tell some mourners they couldn’t attend the funeral and prayed with them outside the church. The parish also offered a livestream of the services.

“It’s the first time I’ve ever had to do something like that. And, you know, it was very important for me to remain calm, to allow people to get upset,” he said.

The pastor said an upcoming funeral will have even greater restrictions with only 10 people in attendance, which in some cases wouldn’t allow for all of the immediate family. The family decided to go ahead with the funeral Mass, he said, despite the restrictions. The service will be livestreamed.

He said arrangements will probably be made to have larger memorial services at later dates. In the meantime, he is trying to be as available as possible during this difficult time, made all the more difficult by a death in the family.

“I would not typically be in contact with a family every day,” the priest said. “But I do want to make sure that I’m in touch with them. Part of it is to make sure if there’s any pastoral care that needs to be done.”

Back in Fulton, Fischetti said she originally planned a wedding for 150 guests, but she’s not sweating the details, she’s just grateful.

“It definitely feels very surreal at this moment,” Fischetti said, adding that she felt more at peace after meeting with the priest.

She said her reception can wait until her first anniversary, March 20, 2021. Because her fiance is in the process of getting a new job, the couple hadn’t planned a honeymoon.

“I’ve been praying and doing the rosary every night in hopes that Mother Mary would watch out for us. And I know she’s answering our prayers here,” Fischetti said. “Everyone (could) watch us online and still keep safe. And that’s really what’s important, that everyone stays safe.”