Couples find creative ways to scale back weddings during pandemic 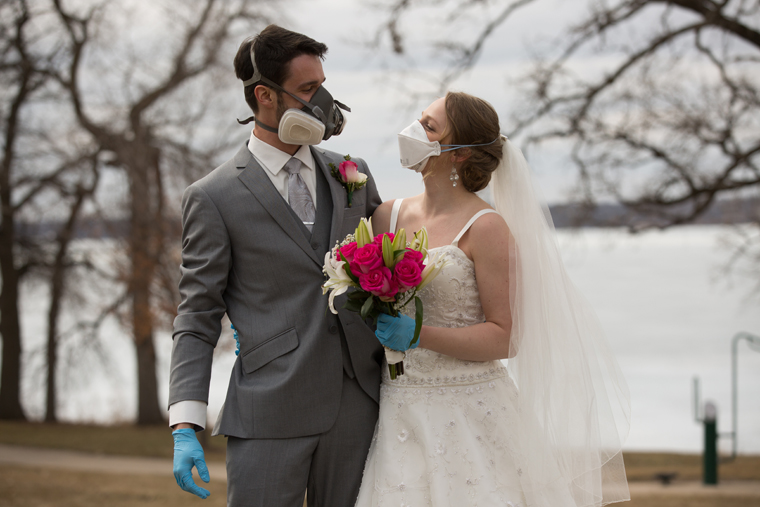 ST. PAUL, Minn. (CNS) — Because of her devotion to St. Joseph, Anne Spinharney wanted her wedding to be on the saint’s feast day, March 19.

But when she and her now-husband, Jordan Spinharney, were planning their 2020 wedding, they noticed March 19 fell on a Thursday.

Such is life during the COVID-19 pandemic.

The Spinharneys originally chose April 18 for their wedding Mass at Holy Family Parish in suburban St. Louis Park. But, like some other couples in the Archdiocese of St. Paul and Minneapolis, they changed plans because of restrictions on large gatherings imposed by both the state and Archbishop Bernard A. Hebda.

Anticipating the eventual suspension of public Masses in the archdiocese, they made a hurried decision March 13 to reschedule their wedding to March 19.

In addition to the restriction on gatherings, they were concerned about Jordan’s father, Robert Spinharney, who has advanced cancer and wondered how well he would be in mid-April.

“It was really hard to let go of all our plans and hopes,” Anne, 30, told The Catholic Spirit, the archdiocesan newspaper. “We had a very large wedding planned. We had over 300 guests invited. And, we wanted it to be really big and happy and Catholic.

“Jordan’s brother, who’s a priest, was supposed to be our celebrant. And, it was just a lot to give up, and there was a lot of sadness. … But, in the midst of that, one thing that we just kept returning to is we think the Lord’s hand was in this.”

Likewise, John and Catherine Braun saw God’s intervention in their decision to move their wedding from April 25 to March 21 at St. Francis Xavier Parish in Buffalo, New York, the parish where the groom grew up.

They scrambled to put together a scaled back wedding that included just 10 people inside the church: both sets of parents, a maid of honor and best man and Father Kyle Kowalczyk. It made for an intimate gathering that gave the event a special flavor.

“It was really quite great, honestly,” said John, 25. “It took some of the distractions out, on a practical level. We could really just pay attention to each other because we didn’t have 500 eyes on us.”

The hardest part for Catherine, 27, was not having her brothers and sisters attending. Instead, they and others waited in the parking lot and listened to a livestream of the ceremony, then cheered and waved when she and John emerged outside.

“It was just overwhelming that so many people would drive out to see us just for a moment, because really all we could do was wave at them and pass by them and thank them for being there,” Catherine said. “People drove between an hour and an hour-and-a-half to just say hi to us for five minutes. So, the outpouring of love that so many people came out to be with us and to celebrate was just breathtaking for me.”

For Jordan Spinharney, one of the most beautiful parts of the day came during a treasured moment with his ill father before the ceremony. He had feared Robert might not make it through the original wedding date.

“Having him there for me was a necessity,” said Jordan, 32. “I wanted my dad there, I needed my dad there. Before the Mass, I just had a moment with him. Really, it was just the two of us sitting in the church, when everyone (else) seemed to have disappeared. … I asked for his blessing and knelt in front of him, and he gave me his blessing. We wept together in each other’s arms and it just was a great moment of connection.”

Perhaps one of the smallest weddings during these times was between Tony and Annie Eicher, who chose March 17, St. Patrick’s Day, for their ceremony at the University of St. Thomas in St. Paul. The two alumni exchanged vows in the chapel with just a priest, Conventual Franciscan Father Steven McMichael, and Annie’s parents present as witnesses, plus a few other people who helped with the ceremony. The couple decided just a day before to move up their wedding from their original date of March 21.

“It was a very special day. I don’t think we have any regrets (about) how it went down,” said Tony, 31. “It was just as special as we could ever have imagined it.”

In the end, the three couples had a keener focus on the sacramental nature of marriage, something that was on their minds long before they tied the knot.

“One thing that John was saying to me in the days leading up to our wedding was, ‘What do we need? This is a vocation between you and God and I, and that’s all we really need,'” Catherine said.

“It’s not about having a big party and having all these other people — even though we love them — be there. But, it’s about the vocation, and that’s what we’ve been preparing for the last seven months anyway.”