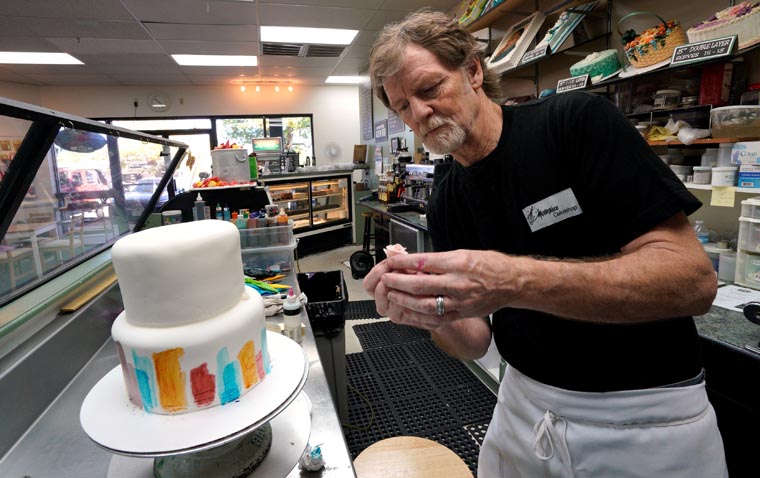 WASHINGTON (CNS) — The U.S. Supreme Court seemed equally divided in the long-anticipated oral arguments Dec. 5 about the baker who refused to make a wedding cake for a same-sex couple because of his religious beliefs.

Even Justice Anthony Kennedy’s comments went right down the middle, from expressing concern for those who would be shut out of services to later stressing that “tolerance is a two-way street” and saying the state of Colorado, where the bakery is located, seemed to be “neither tolerant or respectful” of the baker’s views.

It drew strong feelings on both sides long before the court heard the arguments with the filing of 100 friend-of-the-court briefs months ago and the crowds lined up for days hoping to get into the court during the arguments. Crowds also gathered on the Supreme Court steps under cloudy skies and warm temperatures, chanting and holding aloft placards such as “Justice for Jack” (the baker) and “Open for All.”

And after the hour and a half of oral arguments, chairmen of three USCCB committees issued a statement saying: “America has the ability to serve every person while making room for valid conscientious objection.”

It also said it hoped the court would continue to “preserve the ability of people to live out their faith in daily life, regardless of their occupation,” noting that artists “deserve to have the freedom to express ideas — or to decline to create certain messages — in accordance with their deeply held beliefs.”

The case before the court at the end of 2017 was five years in the making, beginning in 2012 when Charlie Craig and David Mullins asked the Colorado baker, Jack Phillips, to make a cake for their wedding reception. Phillips refused, saying his religious beliefs would not allow him to create a cake honoring their marriage.

The couple filed a complaint with the Colorado Civil Rights Commission, which decided the baker’s action violated state law. The decision was upheld by the Colorado Court of Appeals. The Colorado Supreme Court wouldn’t take the case, letting the ruling stand. The U.S. Supreme Court agreed to hear the case.

During oral arguments at the high court, many questions came up about what constitutes speech, since the baker claimed he should have freedom of speech protection.

Justice Elena Kagan asked if a florist, chef or makeup artist also should have the same protection and other roles also were called into question such as tailors, or invitation designers, as were other cakes; pre-made cakes, for example, would not be an issue of compelled speech.

And as Kristen Waggoner, the Alliance Defending Freedom attorney representing Phillips, said “not all cakes would be considered speech.”

Amid the back and forth between what could be considered artistry and questions about how artists could be compelled to convey messages they disagree with, Justice Stephen G. Breyer asked: “Well, then, what is the line? That’s what everybody is trying to get at.”

“Obviously, we want a distinction that will not undermine every single civil rights law,” he added.

The bulk of the defense for the baker focused on his freedom of speech rights, which attorneys argued would be violated by forcing him to make this cake.

Waggoner said the court was saying it had the discretion to decide what speech is offensive and what isn’t, but it didn’t “apply that in a fair way to Mr. Phillips.” She also said that “what’s deeply concerning” is how speech could be compelled of “filmmakers, oil painters and graphic designers in all kinds of context.”

The arguments against the baker questioned if failing to provide services to same-sex couples was discriminatory.

David Cole, a lawyer for the American Civil Liberties Union, defending the couple, said discrimination against the couple who wanted the cake consigned them to “second-class status.”

The last minutes of the oral arguments boiled down to the opposing views but also didn’t reveal a clear path forward.

Justice Sonia Sotomayor said the nation’s views about interracial marriages “didn’t change on its own” but because of “public accommodation laws that forced people to do things that many claimed were against their expressive rights and against their religious rights.”

“Whatever it is you choose to sell, you have to sell it to everyone who knocks on your door, if you open your door to everyone,” she added.

In response, Waggoner said it would be a grave offense to the First Amendment to “compel a person who believes that marriage is sacred, to give voice to a different view of marriage and require them to celebrate that marriage.”

Sotomayor suggested not participating in weddings or creating neutral wedding cakes but that refusing to offer goods to some goes against public anti-discrimination laws.

Waggoner in her last allotted minute said: “A wedding cake expresses an inherent message that is that the union is a marriage and is to be celebrated, and that message violates Mr. Phillips’ religious convictions.”