COVID-19 denies Eucharist to Catholics Holy Thursday, the day of its origin 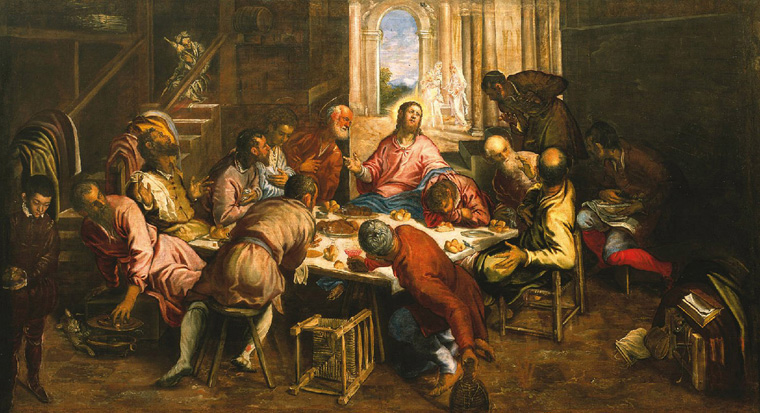 WASHINGTON (CNS) — For most Catholics, Holy Thursday 2020 will be a Eucharist-free one.

It’s one of the holiest days on the liturgical calendar, a day associated with the Last Supper, where Jesus instituted the holy Eucharist, turning the bread and wine into his real presence.

The coronavirus pandemic has closed churches to public gatherings globally, requiring the faithful to participate in Mass online or by watching television throughout the 2020 Holy Week and separating most Catholics from holy Communion.

Catholics have shared memes all over social media saying they have sacrificed more than they ever have throughout Lent 2020 amid the coronavirus, but the notion of going without the Eucharist on Holy Thursday seems particularly painful to many.

“I feel a little lost,” said Sara Chambers, a parishioner at St. Charles Borromeo Catholic Church in Bloomington, Indiana, who has been participating in Holy Hours and Mass livestreamed by her pastor, Father Tom Kovatch.

Holy Week without the Eucharist feels unnatural, Chambers said, especially Holy Thursday, even though Pope Francis has reminded the faithful that “spiritual Communion” — inviting Jesus into one’s heart and soul when receiving the actual sacrament isn’t possible — is part of Catholic tradition.   In Gospel accounts of the Last Supper — the final meal Jesus shared with his apostles in Jerusalem before his crucifixion — he breaks the bread and hands pieces of it to his disciples saying “Eat, this is my body,” and then passes a cup of wine and asks them to drink, “For this is my blood.”

It’s the basis for holy Communion in Catholicism and the church teaches that the host and wine consecrated by the priest is not just a symbol of Jesus, it becomes the real presence of Christ.

“In the bread and wine, used in the Mass, they are transubstantiated, we say, into the body and blood of Jesus Christ,” said Father John Benson, parochial vicar of the Cathedral of St. Matthew the Apostle in Washington. “He is present in a unique way in the Eucharist.”

Sister Constance Veit, of the Little Sisters of the Poor in Washington, remembers one of the nuns at her school saying Jesus was waiting for her at Mass, providing her a way of relating to how the church teaches the Real Presence.

On a day and in a week when countless Catholics around the world are yearning for holy Communion, yet are denied it, there are others who don’t believe in transubstantiation.

Those statistics alarmed several U.S. bishops, who have said it shows a failure in catechesis.

Toni Guagenti of Virginia Beach, Virginia, is among the 70% of Catholics who believes the Eucharist is a symbol and not the real presence of Christ, but says that symbol remains a strong one for her even though she has fallen away from the church.

“It is a strong enough symbol that I will not take Communion when I do go to Mass for any reason,” Guagenti said. “I feel I’m too far removed from it to take the body and blood of Christ.”

“I would like to say the (Pew) study isn’t accurate, but I’m afraid it may be,” said Bishop Alfred A. Schlert of Allentown, Pennsylvania.
Though distressed by the study’s findings, Bishop Schlert said he doesn’t see this as a crisis of faith, but as a crisis of how church leaders are teaching the basic truths of Catholic beliefs.

It’s not the first time in the history of Catholicism that a percentage of the faithful have doubted the real presence of Christ in the Eucharist and Father Benson said church leaders became very precise about the teaching during the Middle Ages, when some theologians had their doubts.

For the current era, Father Benson believes if Catholics really immerse themselves in Mass, in eucharistic adoration, and get a true understanding of the life, teaching, passion and resurrection of Christ, the world will see a cultural shift in the belief of the Real Presence.

The current global separation from the Eucharist during this pandemic also may create a greater hunger for holy Communion, Father Kovatch said.

“I think that this separation is going to fire some people up,” he said, “because now they have lost something they just took for granted. I think that we’re going to have large numbers of people who are going to come back in great joy.”