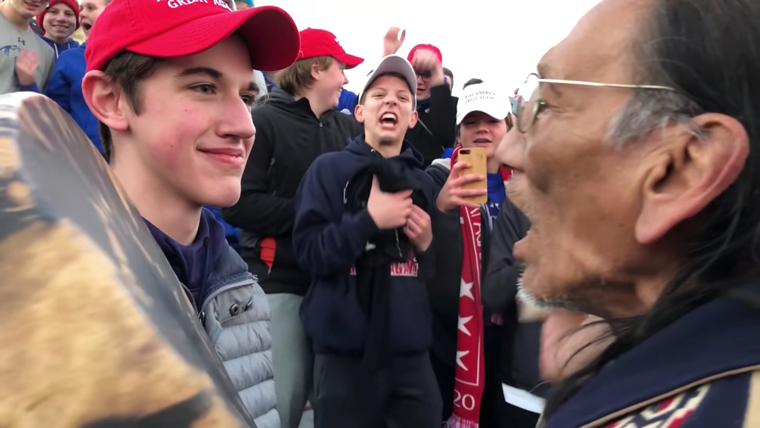 Nick Sandmann, a junior at Covington Catholic High School in Park Hills, Ky., and others students from the school stand in front of Native American Vietnam veteran Nathan Phillips Jan. 18 near the Lincoln Memorial in Washington in this still image from video. An exchange between the students and Phillips Jan. 18 was vilified on social media the following day, but the immediate accusations the students showed racist behavior were stepped back as more details of the entire situation emerged. (CNS photo | Kaya Taitano, social media via Reuters)

WASHINGTON (CNS) — Days after the now-famous exchange took place between Covington Catholic High School students and a Native American tribal leader in Washington, the Diocese of Covington, Kentucky, announced it would begin a third-party investigation into what happened at the foot of the Lincoln Memorial following the annual March for Life Jan. 18.

“This is a very serious matter that has already permanently altered the lives of many people. It is important for us to gather the facts that will allow us to determine what corrective actions, if any, are appropriate,” the diocese said in a Jan. 22 statement.

It also mentioned that Covington High School, Covington Latin School and Covington’s diocesan offices were closed that day due to threats of violence and would reopen when it was safe to do so. A few dozen people took part in a protest vigil at the diocese’s headquarters Jan. 21.

Covington High School reopened Jan. 23 with police at the school entrance. The diocesan offices also reopened that day, but the building was evacuated that afternoon due to a suspicious package, which police and firefighters determined to be safe that evening.

“We pray that we may come to the truth and that this unfortunate situation may be resolved peacefully and amicably and ask others to join us in this prayer,” the diocese said, adding that it will “have no further statements until the investigation is complete.”

On Jan. 19, the day a viral video showed the students who appeared to be mocking or disrespecting Nathan Phillips, tribal elder for the Omaha Tribe, Covington High School and the Diocese of Covington issued a joint statement condemning the students’ actions, apologizing to Phillips and noting that the incident was “being investigated and we will take appropriate action, up to and including expulsion.”

But more of the story unfolded the next day when the students issued statements about what happened and longer videos shown online revealed that another group at the foot of the Lincoln Memorial that afternoon included members of the Hebrew Israelites, who with Phillips and others were attending an Indigenous People’s March.

The Israelites were there to share their own beliefs that African-Americans are God’s chosen people and the true Hebrew descendants.

Members of this group, as shown in video footage, taunted the students and some responded back. Phillips, the Native American, walked over to the students and the group, which he has described to reporters as an intervention and was singing and beating a song of prayer.

The following evening, a group of Native American activists reportedly gathered in protest at the steps of the Basilica of the National Shrine of the Immaculate Conception in Washington where an evening Mass was being celebrated.

A Jan. 23 statement from the shrine said: “A group of approximately 50 individuals attempted to gain entrance to the basilica while chanting and hitting drums.” The group was not permitted to enter “due to the disruption it would have caused” and were “asked to leave the property after it was determined they did not intend to share in the celebration of Mass.”

Archbishop Joseph E. Kurtz of Louisville, Kentucky, a neighboring diocese to Covington, wrote in his Jan. 22 blog that he has received “many calls and email messages from people with many different viewpoints and seemingly opposite messages about the incidences involving Covington Catholic High School students at the March for Life. Many of these calls and messages have revealed the regrettable polarization in our church and in our society.”

He said many people have pointed out how he initially joined Covington Bishop Roger J. Foys in a blog post condemning the alleged actions, which he has now taken down.

The archbishop said he has sought to “act in solidarity with the bishop of Covington, who is in a position to have the best information about what transpired and who has pledged an independent investigation of the situation.”

“Whatever the investigation reveals, I hope that we can use this as a teachable moment, learn from any mistakes on the part of anyone involved, and begin the process of healing,” he added.

Nick Sandmann, a junior at Covington Catholic High School who was most prominent in the footage for standing directly in front of Phillips, issued his own statement Jan. 20 saying he would cooperate in any investigation church leaders planned to do. He said he had received insults and death threats since the incident.

In an interview shown Jan. 23 with “Today” show host Savannah Guthrie, Sandmann said, “In hindsight, I wish we could’ve walked away and avoided the whole thing.”

He said he was not disrespectful to Phillips, but chose to just stand still in front of him as a way to show he would not be aggressive.

When asked if he heard students say anything insulting or racist in response to the taunts they received, Sandmann said: “We’re a Catholic school, it’s not tolerated. They don’t tolerate racism and none of my classmates are racist people.”

Phillips responded the next day to this interview, also on the “Today” show, and said he thought Sandmann’s remarks seemed “coached” and that he failed to take responsibility, but he said he took it to prayer and woke up the next day with a forgiving heart.