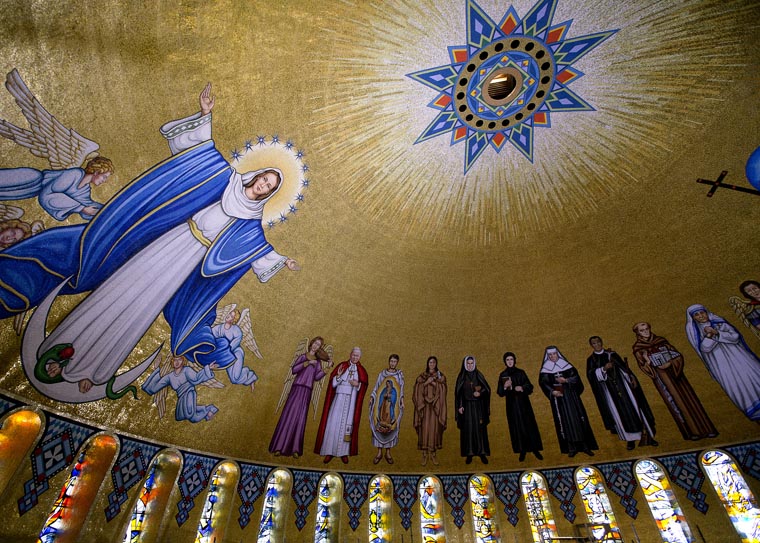 By Carol Zimmermann | Catholic News Service
WASHINGTON (CNS) — The overflowing congregation at the Basilica of the National Shrine of the Immaculate Conception hardly needed reminding to raise their “eyes to the heavens” during a dedication of the Trinity Dome Mosaic Dec. 8.

The diocese’s own Father Christopher Seibt was among those present for the dedication — scroll down to see his behind-the-scenes photos!

Before Mass began, all eyes were already on the newly completed gold dome above the front central section of the Upper Church.

When it was blessed during Mass, incense rose above the congregation and bright lights were turned on to give a better view of the newly finished dome that includes the words of the Nicene Creed encircling the base and a depiction of the Holy Trinity, Mary, the four Evangelists, angels and more than a dozen saints connected to the United States or the shrine.

During the blessing and before and after Mass, phones and cameras were held aloft to capture the completed work more than two years in the making. But it would take more than a few pictures to capture the details in this majestic work of art described as the “crowning jewel” of the national shrine during introductory remarks by Msgr. Walter Rossi, the rector.

The dome mosaic is composed of more than 14 million pieces of Venetian glass covering more than 18,300 square feet of the dome’s surface. Its completion marks the final step in finishing the work of the Upper Church that began in 1955.

The dome was dedicated, fittingly, on the feast of the Immaculate Conception, reflecting the basilica’s namesake. The dedication Mass was celebrated by Washington Cardinal Donald W. Wuerl and Cardinal Kevin J. Farrell, prefect of the Vatican’s Dicastery for Laity, the Family and Life, who was named by Pope Francis to be his special envoy at the dedication Mass.

Other cardinals concelebrating the Mass included Cardinals Theodore E. McCarrick, retired archbishop of Washington and Justin Rigali, retired archbishop of Philadelphia, along with Cardinal Daniel N. DiNardo of Galveston-Houston, president of the U.S. Conference of Catholic Bishops. They were joined by more than two dozen bishops and 90 priests.

Cardinal Wuerl pointed out in his homily that the mosaic tiles in the dome are symbolic of the living body of Christ regularly filling the pews of the shrine and reflecting the church’s diversity.

He urged the congregation of families, women religious, students and people of all ages and ethnic backgrounds who filled the pews, the side chapels and stood in the back at the dedication Mass to always look to this “great majestic dome mindful of our prayer to Mary” and ask for her intercession.

He said Mary is the model of “what our faith should be” because she believed that nothing was impossible with God.

The cardinal said he remembered coming to the shrine when he was a student at The Catholic University of America in the 1960s when the walls were simply brick except for the mosaic image of the Risen Christ at the front of the church.

He also noted that the completion of the dome finishes a work that began nearly 100 years ago when the shrine’s cornerstone was placed in 1920.

As construction began on the National Shrine, as it was then called, Catholics across the country were invited to contribute however they could. Some donated pieces of gold jewelry and even precious stones, the cardinal said, which were fashioned into what came to be known as the “first chalice of the National Shrine” and was used at the Dec. 8 mosaic dedication.

When Pope Francis was at the shrine in 2015 to celebrate Mass and canonize St. Junipero Serra, he also blessed a piece of the mosaic: the words for the beginning and end of the Nicene Creed: “I believe in one God” and “Amen.”

At the end of the dedication Mass, Msgr. Rossi thanked the artists and workers, some of whom were seated at the front of the church, for their work on the mosaic, which was done in Italy and shipped in 30,000 sections weighing 24 tons. He pointed out that no one was injured and no damages occurred in the installation.

He also thanked the many donors who contributed to the dome work and gave to the shrine’s one-time national collection for the project on Mother’s Day.

“This crowning jewel of Mary’s shrine is really your work, your gift to the Blessed Mother,” he said.

Editor’s note: Father Christopher Seibt, who is currently studying canon law at the Catholic University of America in Washington, DC, was present for the dedication of the dome. Check out the photos he shared below:

“A very beautiful and moving Dedication of the Trinity Dome Mosaic on the Solemnity of the Immaculate Conception! Pictured are the completed Dome, our very own St. Marianne Cope who is included in the procession of saints, and me signing my name before the tiles were installed (due East, ready for the Lord when he comes!).”