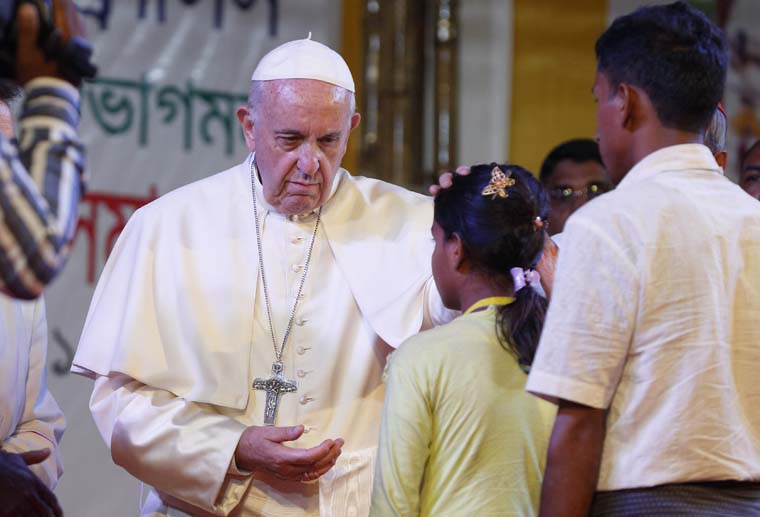 In comparison to the suffering the Rohingya have endured, he said, the response of the people at the gathering actually is small. “But we make room for you in our hearts.”

“In the name of all those who have persecuted you and have done you harm, especially for the indifference of the world, I ask forgiveness,” he said.

Pope Francis’ remarks, which he made in Italian, were translated for the crowd and for the Rohingya. Many of them were in tears.

In his formal speech at the interreligious meeting, Pope Francis insisted “mere tolerance” for people of other religions or ethnic groups was not enough to create a society where everyone’s rights are respected and peace reigns.

Believers must “reach out to others in mutual trust and understanding,” not ignoring differences, but seeing them as “a potential source of enrichment and growth.”

The “openness of heart” to which believers of all faiths are called includes “the pursuit of goodness, justice and solidarity,” he said. “It leads to seeking the good of our neighbors.”

Pope Francis urged the people of Bangladesh to make openness, acceptance and cooperation the “beating heart” of their nation. Such attitudes, he said, are the only antidote to corruption, “destructive religious ideologies and the temptation to turn a blind eye to the needs of the poor, refugees, persecuted minorities and those who are most vulnerable.”

According to a Vatican translation, Farid Uddin Masud, speaking for the Muslim community, told the pope, “it is compassion and love which today’s world needs most. The only remedy and solution to the problem of malice, envy and fighting among nations, races and creeds lies in the compassionate love preached and practiced by the great men and women of the world.”

Masud, a famous prayer leader and advocate of dialogue and tolerance, is thought by some to have been the main target of a 2016 bombing at a major Muslim prayer service in Sholakia, Bangladesh. Four people were killed.

Praising the pope for speaking on behalf of “the oppressed, irrespective of religion, caste and nationality,” Masud particularly cited Pope Francis’ concern for the Rohingya. He said he hoped that the pope’s public support would strengthen international efforts to defend their rights.

Anisuzzaman, a famous professor of Bengali literature, told the gathering that in a world torn by strife, the pope’s message of encounter and dialogue takes on added importance.