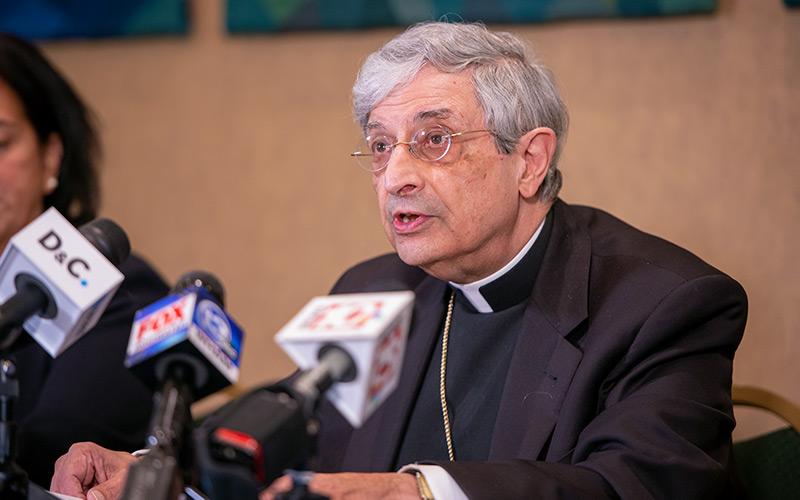 Rochester Bishop Salvatore R. Matano (center) speaks to the media at the diocesan Pastoral Center in Gates during a Sept. 12 press conference regarding the diocese’s Chapter 11 bankruptcy filing earlier that day. (Courier photo by Jeff Witherow)

GATES — In the wake of nearly 50 lawsuits filed against it since New York’s Child Victims Act took effect Aug. 14, the Diocese of Rochester filed for reorganization Thursday, Sept. 12, under Chapter 11 of the U.S. Bankruptcy Code.

The petition was filed with the U.S. Bankruptcy Court Western District of New York Thursday morning. The court documents were signed by Bishop Salvatore R. Matano; Lisa M. Passero, diocesan chief financial officer; and Stephen A. Donato, an attorney for the diocese.

“This is a very difficult and painful decision,” Bishop Salvatore R. Matano said in a video and letter to parishes released Sept. 12. The bishop read the letter at the beginning of a Sept. 12 press conference at the diocesan Pastoral Center.

“But after assessing all reasonable possibilities to satisfy the claims, reorganization is considered the best and fairest course of action for the victims and for the well-being of the diocese, its parishes, agencies and institutions,” he said. “We believe this is the only way we can provide just compensation for all who suffered the egregious sin of sexual abuse while ensuring the continued commitment of the diocese to the mission of Christ.”

According to the United States Courts website, Chapter 11 is a voluntary action taken by organizations to settle claims on which they owe while remaining intact.

As part of its filing, the diocese submitted Form 204, listing creditors with the 20 largest unsecured claims. Nineteen of the 20 were anonymous creditors represented by attorneys; each such claim was labeled as a “CVA lawsuit” and estimated at a minimum of $100,000.

The Child Victims Act opened a one-year “window” during which child sexual-abuse claims could be filed in cases that had previously been barred by a statute of limitations. As of 5 p.m. on Sept. 12, 46 claims had been filed against the Rochester Diocese since the CVA window opened.

The bishop went on to explain that “a Chapter 11 filing stops the collection of debts and legal actions and enables the diocese to form a reorganization plan that will detail how available assets will be used to settle claims and negotiate reasonable settlements. Had the diocese not filed under Chapter 11, it would face multiple civil actions, a slow, unpredictable and costly process that would require years of court involvement, and those claimants who filed suits first would receive all available funds to pay victims. As a result, later claimants would receive nothing. Most importantly, such lengthy proceedings delay justice for the victims and only prolong their pain and suffering.”

As part of the reorganization plan, which must be approved by the bankruptcy court, the diocese intends to create a victims’ fund, with a pool of money from the diocese and its insurance carriers. Bishop Matano emphasized that the Chapter 11 proceedings are not expected to directly impact the 86 parishes in the Rochester Diocese’s 12 counties, explaining that parishes are separately incorporated under the state’s Religious Corporation Law.

During the press conference, Bishop Matano noted that the size of monetary awards for victims will be determined by the bankruptcy court.

Although Bishop Matano did not give a timetable on how long the bankruptcy proceedings will last, he said in his letter that “the diocese’s goal is to bring the Chapter 11 process to a conclusion as soon as is possible.”

Toward the end of the press conference, Bishop Matano grew emotional as he praised the people of the Rochester Diocese for remaining supportive during this rocky chapter of diocesan history.

Editor’s note: This story first appeared at catholiccourier.com, the website of the newspaper of the Diocese of Rochester.