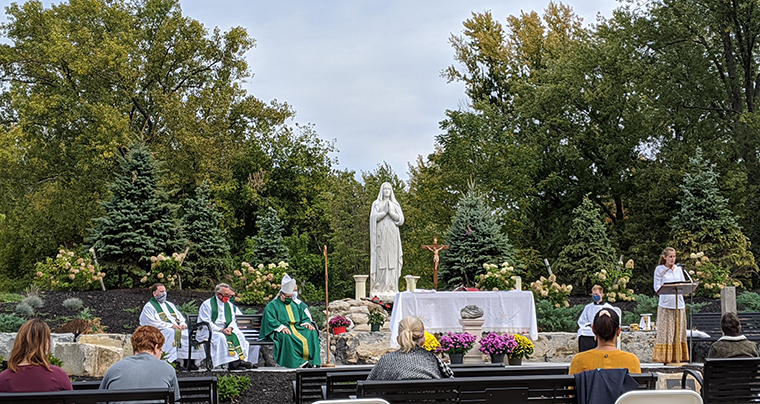 The Syracuse Diocese and its Laudato Si’ Task Force marked the Season of Creation (September 1 – October 4) with events that included a special Oct. 4 Mass celebrated by Bishop Douglas J. Lucia at Our Lady of Hope Grotto and two fine online presentations: “The Scripture and Spirituality of Laudato Si’,” by Father Tim Taugher, pastor of St. Francis of Assisi parish in Binghamton (September 15), and “The Science of Laudato Si’: Threats to Our Common Home,” by Dr. Larry Tanner, Professor of Environmental Science Systems at Le Moyne College (September 22). The Mass is viewable at facebook.com/ourladyofhope and the talks are viewable under “Resources” at syracusediocese.org/being-catholic/pope-francis/laudato-si/

Summarized here are reflections from the presenters.

Father Taugher: Scripture shows us how creation is a reflection of God’s Creative Love, and how our relations with the world are part of our human identity. In the Book of Genesis, God declares that all creation is good: “God saw all God made, and indeed it was very good.” Creation is also an object of praise in Psalm 24: “The Lord’s are the earth and its fullness, the world and those who dwell in it.”

“We are not God,” as Pope Francis writes in Laudato Si’, but we are to be co-creators with God in being good stewards of our ‘common home.’” Yet sin has led humans to abuse this precious gift of creation and our environment. This past November, Pope Francis announced that the Church’s Catechism would be updated to include a definition of “ecological sin.”

In the Paschal Mystery, Jesus’ Death and Resurrection reconciled humanity with God and liberated all creation with the hope of a “new heaven and new earth.” Chapter Two of Laudato Si’, “The Gospel of Creation,” provides an appreciation of the Scriptures that are also the foundation of Catholic Social Doctrine.

In 1991, before Laudato Si’, the United States Catholic Conference published a Pastoral Statement on “Renewing the Face of the Earth: An Invitation to Reflection and Action on Environment in Light of Catholic Social Teaching.” It states directly that the “environmental crisis” is a “moral challenge.” We are to examine how we use and share the goods of the earth, what we pass on to future generations, and how we live in harmony with God’s creation. Pope Francis calls us to an “ecological conversion” to meet this moral challenge.

Professor Tanner: As Pope Francis noted in Laudato Si’, the Earth, our common home, has been entrusted to us, not granted unconditionally to use as we please. The pope, who was a chemist before entering the priesthood, cites the science in explaining the threats to our home. In Chapter One he describes in detail the degradation from pollution and the waste of water and soil resources, the loss of natural environments and threats to biodiversity, the decline of the ocean environment, and the dangers posed by a changing climate. He attributes many of these problems to what he calls our “throwaway culture,” the consumption of resources without regard to their depletion or the impact of the waste we produce.

All the problems cited by him have grown worse since Laudato Si’. The loss of tropical forest in the Amazon and elsewhere continues, causing declines in wildlife and species. By one estimate, the number of animals living in the wild has declined by over two-thirds in the last five decades. A warming climate, demonstrated unequivocally by record high temperatures, is triggering the death of coral reefs, forcing the retreat of glaciers and thus threatening many regions’ water resources, contributing to wildfires, causing expansion of arid regions in Africa and the Americas, subverting subsistence farming, and forcing many of the poor from their homes.

“Many things have to change course, but it is we human beings above all who need to change.” (Laudato Si’, #202).

The pope asked us five years ago to change, but that call went unheeded by many and actively resisted by some. We can still, however, slow our approach to the tipping point, beyond which the damage becomes irreversible. The present pandemic has forced us to alter our habits regarding travel, spending, and business. As we move forward, could we consider which of our new habits to continue for the sake of our tomorrow?