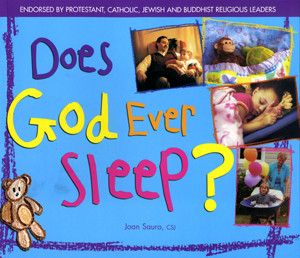 and a good chunk of nothing.

It’s from this nothing — quiet moments spent looking out the window or sitting in the sun — that the stories she writes begin to rise, word by word, into her mind.

What she hears are the first few words of her next story, or perhaps she’ll remember a phrase or see an image that she’ll incorporate into a story she’s already working on.

Sister Joan will be signing her children’s book Does God Ever Sleep? in the book section of Wegman’s in Dewitt from 11 a.m. to 2 p.m. on Sunday, Dec. 6. The book holds many happy memories for her; she dedicates it to her late mother and some of the pictures are of her own family members.

But Sister Joan has also moved on to put together a collection of her short stories on life as a woman religious. She has recently completed the manuscript and is in the process of finding a publisher.

She said she has read books about life in a convent, but books written by someone who has lived the life are much rarer.

“It’s our life as sisters written by a sister, and I don’t think you can find many of those on the shelf,” she said.

While she said she doesn’t think that all writing has to come from first-hand experience, her own writing comes from a sincere attempt to encounter the truths of her life.

“There are things we share in common, and I think love is one, but I don’t think people understand what love and death in the convent is like,” Sister Joan said.

Sometimes, though, seeking the truths about topics like love and death leads Sister Joan farther into the world of fiction.

One example of this is her short story entitled “Bars” which appears in last month’s issue of U.S. Catholic. In this story, Sister Joan tells of an aging woman and the attempts of her grown children to ensure her safety. Bars are installed throughout the house to help the increasingly frail woman navigate her way. When the well-intentioned children begin to consider barring her windows and transferring her to a nursing home, the woman lies down after tea, pulls an afghan over herself and slips into death.

The story, Sister Joan said, comes from her own mother’s death. But the truth of the story lies in the children’s love and concern for their mother, rather than the story’s actual events.

In reality, her mother’s death was a long and difficult experience that ended in a nursing home.

“I decided to give her a better death,” Sister Joan said, “so I wrote ‘Bars.’”

In another story, she tells of a colorful sister she knows who is so full of life she constantly fidgets her feet and taps her fingers. “I wanted to work out getting to know her better,” Sister Joan said. The way for her to do that was to write this colorful character down.

Stories Sister Joan has written have appeared in the Notre Dame alumni magazine, in Commonweal, and they have earned her several fellowships from the New York State Foundation for the Arts and a Best Story of the Year award from the Catholic Press. She has written several articles and six books so far, including The Whole Earth Meditation and The Diary of a Jogging Nun.

From this work and from some newer pieces, she took 15 of her best stories and incorporated them into a manuscript that expresses the experience of living the life of a woman religious. “The task was spreading them all out all over the floor and getting a picture of the whole,” she said.

For the most part, Sister Joan’s stories are short, concentrated narrative bursts. “Bars,” for instance, is only eight paragraphs long.

She figures her short stories are somewhere between creative nonfiction and poetry. “I think it’s very close to poetry. It’s compact, it’s dense and it’s done.” If writing were running, Sister Joan said, she’d be a sprinter. “I’m very, very good at doing four to five pages, I’m not good at doing a whole book.”

These short bursts of vibrant energy make Sister Joan particularly well-suited to leading the creative writing classes she teaches for the children at Holy Cross School in DeWitt each year. She said she finds the students’ spontaneity and forthrightness energizing. “They’ll let you know. Sometimes you’re headed in one direction and they’ll want to go in another,” she said.

While she only teaches the classes for a few weeks once a year (usually in May) she said she can see an immediate impact on her own writing. “After I finish my three weeks with them, I find my writing better,” she said.

This creative relationship extends to the women she lives in community with as well. At every turn, she said, her fellow women religious are there to support her. Although the book Sister Joan will be signing at the Wegman’s in DeWitt was published in 2005, she said the opportunity for the public book signing arose recently through a fellow Sister of St. Joseph in Rochester. She had a relation who worked at the Wegman’s headquarters in Rochester, and they were able to coordinate with the management at the store in DeWitt for the signing. Another sister made the poster that will appear behind Sister Joan during the signing.

“Rather simply, this is what a community of sisters can do for you. We will help in whatever way we can,” Sister Joan said, “and think nothing of it.”