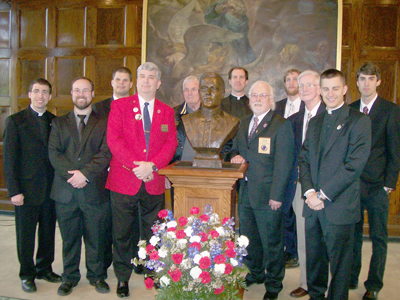 Though the men studying for the priesthood at St. Mary’s Seminary and University in Baltimore come from all over the country, they have one thing in common: the Knights of Columbus’ unwavering support. This past weekend, the seminarians gave back to the Knights by unveiling a life-sized bronze bust of Knights of Columbus founder Father Michael McGivney. The bust was blessed and placed in the seminary.

According to Zachary Miller, who is studying for the Diocese of Syracuse, the seminarians wanted to give back to the Knights of Columbus, especially during this Year for the Priests. He said so often those who encourage vocations to the priesthood are often forgotten.

“The Knights always support us through prayer, fundraisers, dinners, and they buy our books for us. I have to say that without the Knights, making it through the seminary would be nearly impossible,” Miller wrote from St. Mary’s.

The connection between the Knights of Columbus and the seminarians is traced through Father Michael McGivney, founder of the Knights of Columbus, who was ordained at the Cathedral of the Assumption in Baltimore, Md. in 1877. Father McGivney was born of Irish immigrant parents in Waterbury, Conn., on Aug. 12, 1852. He died of, depending upon which biographical information one reads, either pneumonia or tuberculosis on Aug. 14, 1890.

Father McGivney was an alumnus of St. Mary’s Seminary and he returned to serve in his diocese in Connecticut after his ordination. At the age of 29, Father McGivney gathered a group of men in the basement of St. Mary’s Church and formed a fraternal society that now has well over a million members and 14,000 councils across the U.S.

Today, it’s a multi-billion dollar non-profit charitable organization. Father McGivney’s cause for sainthood is being investigated at the Vatican and Pope Benedict XVI declared him Venerable on March 15, 2008. If he is canonized, Father McGivney will be the first U.S. priest declared a saint.

Formed at a time when society was less than compassionate toward Irish Catholic immigrants, the Knights of Columbus vowed to be defenders of their families and their faith. The life insurance program first developed by Father McGivney as a way to take care of the widows and children who lost the family’s breadwinner is now one of the top life insurance companies in the U.S.

The contemporary Knights of Columbus have made seminarians a top priority. Locally, Ed Smith is vocations chairman for the Syracuse area Knights. He planned to make the trip to Baltimore to St. Mary’s Seminary to see the unveiling of the bronze bust. The thoughtfulness of the seminarians was not lost on Smith.

“I almost cried when I read the letter the seminarians wrote to us,” Smith said. “The seminarians used their own funds to do this.”

A letter was sent to Knights of Columbus members from seminarians representing 15 dioceses and archdioceses inviting them to come to the special Mass and unveiling at St. Mary’s Seminary on April 17. The letter reads in part: “As seminarians studying for the priesthood in the Year for Priests, we began to reflect upon our own journeys to answer God’s call. After sharing stories and memories, something incredible happened. Despite the various paths that brought us to the seminary, one thing remained constant: the prayers and support of our brother Knights. … Knights of Columbus councils, large and small alike, were a major part of our vocations and an indispensible source of support.”

Every year the Knights of Columbus in the Diocese of Syracuse donates $10,000 to the Bishop’s Burse, a fund for the seminarians. Smith said the Knights have donated more than a million dollars just through that particular fund. All year the Knights stay in touch with the seminarians studying for the Syracuse Diocese, supporting them financially with extra money to spend however they choose. “We realize they don’t have a lot of money while they’re in seminary,” Smith explained. That’s why, he said, it is even more touching that the seminarians from all the dioceses put their funds together to commission the bust of Father McGivney.

Zachary Miller said that the Knights’ support for him has made a significant impact. Miller said he is strengthened by their prayers and support.

“As a seminarian I often turn to the example of Father McGivney and I often pray that I may follow in his example and lead people to Christ,” Miller wrote.

The Knights of Columbus have a vocations campaign titled “Keep the Faith Alive.” Because their founder was a parish priest, the organization is determined to give back to that particular group.

“We do whatever we can for the seminarians,” Smith said. “If they call and ask for help, we’re gonna be there.”

Another seminarian, Zachary Goodier, feels the generosity of the Knights of Columbus should not go unrecognized.

“The Knights of Columbus’ hard work is very much appreciated by all those who are affected, and they are extremely generous when it comes to helping us seminarians,” Goodier wrote in an e-mail. “The one thing that stands out to me whenever I talk to a Knight, is how passionate they are about being in the organization. Each one speaks so highly of the group and the work they do. It truly is amazing and inspiring.”

Father McGivney gave hope to his community when he founded the Knights of Columbus, Zachary Miller wrote, “I can’t think of a better man to turn to for an intercession, because he was a holy man that gave his life for the church.”