During pandemic, priests work to bridge distance between deceased, family 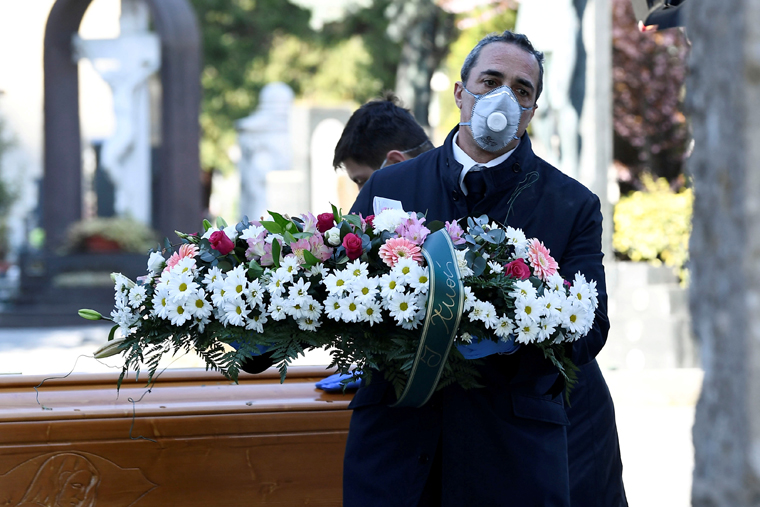 ROME (CNS) — When Father Mario Carminati went to bless the remains of one of his parishioners, he called the deceased man’s daughter on WhatsApp so they could pray together.

“One of his daughters is in Turin and couldn’t take part,” he said, the Catholic magazine Famiglia Cristiana reported March 26. “It was very emotional,” as she was able to pray with them through the messaging service, said the parish priest from Seriate, near Bergamo.

Capuchin Father Aquilino Apassiti, an 84-year-old hospital chaplain in Bergamo, said he sets his mobile phone near the deceased so the loved one on the other end can pray with him, the magazine said.

They are some of the many priests and religious trying to bridge the forced distance between those who have died from COVID-19 and the people they leave behind. The Diocese of Bergamo has set up a special service, “A Heart That Listens,” where people can call or email for spiritual, emotional or psychological support from trained professionals.

With funerals forbidden nationwide, these ministers are also offering blessings and a dignified temporary place of rest before the departed’s ultimate burial.

For example, Father Carminati made one of the churches in his area available for the remains of 45 people awaiting cremation. Because the one crematorium in Bergamo has long been unable to handle the number of dead each day, convoys of army trucks were being deployed to take the dead to the nearest crematoria more than 100 miles away.

With the pews pushed to the side walls of the church of St. Joseph, Father Carminati and an assistant went up and down the central nave, sprinkling holy water over coffins, according to a video report posted by the Italian daily, Il Giornale.

It was better the coffins be in the church awaiting transport than in a warehouse, because “at least we say a prayer, and here they are already in the house of the Father,” Father Carminati said in the video report March 26.

After the coffins are taken away for cities further south, more coffins take their place each day.

The 45 bodies Father Carminati blessed were welcomed later in the day by church and city officials when they arrived for cremation in the province of Ferrara. Father Daniele Panzeri, Mayor Fabrizio Pagnoni and Maj. Giorgio Feola of the military police prayed for the dead upon their arrival, and two officers wearing medical masks held a flowering orchid, Bergamo News reported March 26.

After cremation, the ashes of the 45 dead and another 68 deceased were transported back again to Bergamo, where they were blessed by Bishop Francesco Beschi of Bergamo during a solemn ceremony with the city’s mayor, Giorgio Gori, and local police officers.

To help fill the void of no funeral services or public gatherings to mourn and pray, Bishop Beschi was inviting the entire province of Bergamo to join with him March 27 for a televised and online broadcast of a moment of prayer from the city cemetery to remember those who have died.

Cardinal Crescenzio Sepe of Naples also visited his city’s main cemetery March 27 to bless and pray for the dead. It was the same day Pope Francis was holding a worldwide moment of prayer in the evening from an empty St. Peter’s Square.

Official figures from the national civil protection agency have said more than 8,000 people have died in Italy from COVID-19 as of March 26, with spikes in mid-March between 620 and 790 deaths a day.

However, city officials in the northern Lombardy region have said the number of COVID-19-related deaths could be as much as four times higher, because official figures only count those who have been tested for the coronavirus.

City officials, who have been registering all deaths, not just those attributed to COVID-19, have flagged the high anomalous numbers of people who are dying at home or in nursing homes from pneumonia, respiratory failure or cardiac arrest and are not tested.

For example, Francesco Bramani, the mayor of the small town of Dalmine, told the newspaper L’Eco di Bergamo March 22 that the town had registered 70 deaths, and only two were officially linked to coronavirus. They had only 18 deaths during the same period last year, he said.

While hospital personnel struggle with those in their care, morticians and funeral service workers have been dealing with the massive and underreported number of dead.

Alessandro Bosi, secretary of the Italian federation of funeral service agencies, told Adnkronos news agency March 24 that those working in the sector in the north have not been able to get the personal protection and disinfectants needed when they transport the deceased.

One of the reasons there has been a problem with transporting the deceased in certain areas of the north is not just because of the spike in deaths, but also because many workers and businesses have been put under quarantine.

“So instead of there being 10 businesses operating, there are only three, and this makes the work harder” and is why the army and others had to be called in to help, he said.

“While it is true we are in second place (in the field of health care) what if we, who carry the dead, all get sick?”

When asked in an interview with Vice.com about how families are handling the difficult situation of not being allowed to have a funeral for their loved one, Bosi said people have been enormously responsible and collaborative.

“Families, who have been denied a funeral service, understand the orders are the right thing and that (services) have been postponed in order to avoid situations that could worsen the contagion,” he said the March 20 interview.

“Many people have made arrangements with funeral services and priests to symbolically celebrate the deceased when this time of emergency is over.”