East and West celebrate Mass of Peace in Johnson City 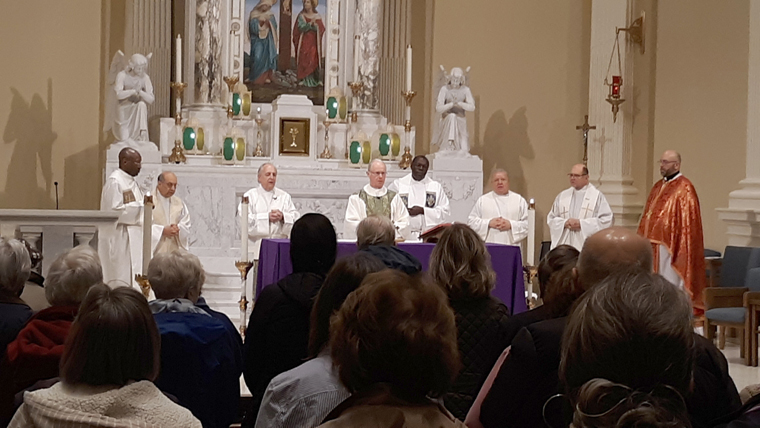 Hundreds of people gathered at St. James in Johnson City on Wednesday evening, March 23, for a Liturgy for Peace in Ukraine. Upon entering the church, attendees were offered a pin with blue and yellow ribbons symbolizing the colors of that country’s flag.

“I thought it would be great, important for the Catholic community to come together around a liturgy for peace,” said Father Tim Taugher, pastor of St. Francis of Assisi parish in Binghamton and principal celebrant of the Mass.

Speaking beforehand, Father Taugher noted it was exactly one month since the war began, with many people killed, injured and displaced. He said they would “pray for peace. That diplomacy can work through the impasses and find a ceasefire.”

“We’ve become complacent a little bit in our faith here,” Father Czabala said in his message.

“And because of that, we’ve got a little bit lazy.”

He said not too long ago in Ukraine, people could be arrested or lose their jobs for going to church on Sunday.  “Currently in other countries, where if somebody walks into a Christian church, they could lose their job. Where if somebody believes in Jesus Christ as the savior, as the son of God,” Father Czabala said, “their houses can be burned.”

“It wasn’t too long ago that the Ukrainian Catholic Church in the Soviet Union was suppressed. It wasn’t allowed to be. People were having services in their houses. People were getting together on Sundays. Priests were walking around in just everyday clothes so they wouldn’t be found,” Father Czabala said.

“When it was free to worship God, churches were full, people were happy. It gave a stimulus to them that they can openly worship God again,” he added.

But in the U.S., Father Czabala said, people sometimes find reasons not to go to church on Sundays.

“Now think about the people who never had the chance to go. And then we can go to church and worship,” he said.

Father Czabala said Ukraine is now in a crisis they did not ask for. He said hospitals, orphanages and places where people live are being bombed.

“It’s hard for us to accept that thought that there is evil in the world just for the sake of evil,” he said.

“We don’t understand it. Why? Because of what we heard today. The teachings of Jesus Christ,” Father Czabala said. “When we see somebody who doesn’t believe or doesn’t want to live his life that way, it’s hard for us to wrap our heads around it. But yet it is happening. And we as Christians need to respond the best way we know, the strongest way we know. His prayer.”

Also included in the Mass was a Ukrainian Litany, including saints from that country. The name of Blessed Vasil Velischkovsky and 27 new martyrs of Ukraine were on the list. Father Czabala explained that Blessed Vasil was a bishop murdered by the KGB. He said the 27 others were bishops, priests, monks and nuns martyred in the Soviet era.

The Mass concluded in a Prayer for Peace by Pope Francis, which alternated voices between the women and men in the church.

The prayer ended with this: “Lord, diffuse the violence of our tongues and our hands. Renew our hearts and minds, so that the word which always brings us together will be ‘brother,’ and our way of life will always be that of Shalom, Peace, Salaam!”

After Mass, Father Czabala spoke of many telephone calls from people wanting to assist those in Ukraine. So far, he said about $25,000 has been received along with clothing and personal items. But he said there is one other thing that’s important.

“Always to pray because prayer really is helpful, really is beneficial, really is assisting with the people there,” Father Czabala said.