Easter in the time of global pandemic: a hopeful day of new creation 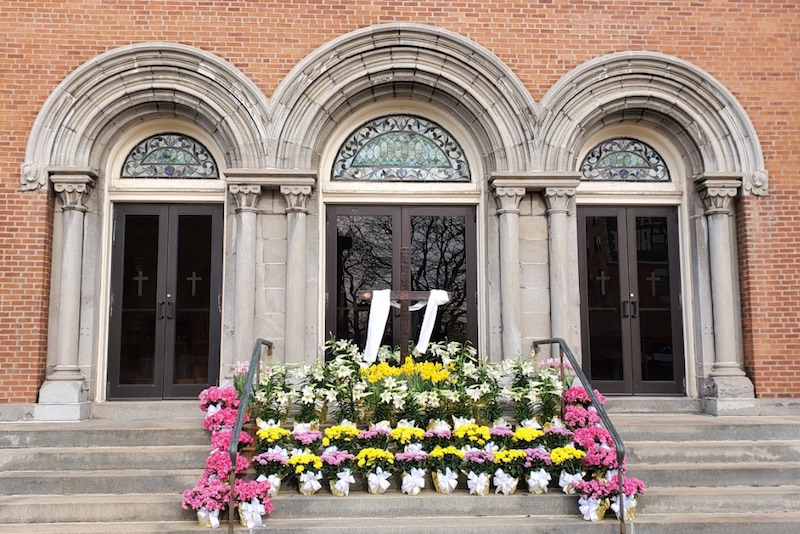 “Alleluia. Christ is risen.” With bells, through song, with banners and Easter lilies, churches today celebrated the sacred day of the resurrection of Jesus Christ. Through recorded and livestreamed Masses, the faithful shared the good news at the center of Christianity: out of darkness, lightness shines; after Jesus’ death on the cross on Good Friday, he rises three days later to bring love, forgiveness, and redemption to the world.

Easter Sunday is more than a celebration of the dawning of the new light of resurrection, Bishop Douglas J. Lucia reminded Catholics. “It is the commissioning of each one of us to light a candle rather than curse the darkness,” he said in a recorded Mass.

For the last month, Bishop Lucia — and clergy worldwide and at the Vatican — have been celebrating virtual Masses as businesses, schools, and churches closed to prevent spreading the coronavirus. New York Gov. Andrew Cuomo announced this weekend that the state’s guidelines urging people to stay home and restricting public gatherings will continue until at least April 29.

The restrictions made for a stark Lent and Holy Week — “unembellished liturgies” that Bishop Lucia called invitations to “strip away a lot of the sentimentality often associated with these days and to see them with the new eyes of faith, hope, and love.” While this year’s Easter celebrations took place without large family meals, Easter parades, or community egg hunts, clergy delivered hopeful messages to remind the faithful of Jesus’ love.

At Holy Trinity in Utica, Father Canon John E. Mikalajunas shared the good news in English and Polish and linked the message of Easter to the fear and uncertainty of the coronavirus pandemic that is keeping people physically apart.

“Did Christ cause this virus? No. A lack of love in creating a virus caused the panic,” he said during a 10 a.m. livestreamed Mass. “Death is our sister. What does the death of the Christ bring? It destroys death and bestows light to those in the tomb. Why are we people afraid of dying if we are to have eternal life?”

On April 11, the Easter Vigil, Father Mikalajunas took to Facebook for the traditional blessing of the Easter food. “Bless these babkas and these Easter breads, begging you that they may be made holy, sanctified, and that we may be given strength as the people who consume them,” he said.

Father Jason Hage, pastor of St. Mary in Hamilton and St. Joan of Arc in Morrisville, sat near the camera to deliver his Easter homily.

For those who may feel disconnected from God or their faith, Father Hage urged, “Go to God. Do not be afraid. Put aside shame and guilt and run into the Father’s arms.”

The gift of the resurrection, Father Hage said, is that “Jesus, who is God in the flesh, knew that death was our greatest enemy, and he wanted to show us that he could even conquer death.”

The Easter story provides a map for believers, he said: “If Jesus has conquered death, if he walked out of his own tomb, that means he can bring you out of your tomb as well. That means that he, if you put your faith in him, will take you by the hand and walk you out of your darkness, no matter what it is.”

Pope Francis’ Easter morning Mass was unique, Catholic News Service reported. Missing were dozens of cardinals concelebrating and tens of thousands of pilgrims from around the world packing St. Peter’s Square. Instead one cardinal — Cardinal Angelo Comastri, archpriest of St. Peter’s Basilica — and a dozen faithful sat inside, one in each pew, before the Altar of the Chair where the pope celebrated the liturgy.

Also missing were the more than 50,000 tulips, daffodils, and flowering shrubs that growers in the Netherlands donate each year to turn into a garden the steps leading up to the basilica.

Yet millions followed on television, by radio, and by livestream as the Easter “Alleluia” was repeated and the Gospel account of the disciples finding the empty tomb was proclaimed both in Latin and in Greek.

In a clear sign of continuing prayers to God for the end of the pandemic, the sanctuary around the altar again was dominated by symbols of Romans’ faith in divine intervention: the icon “Salus Populi Romani” (health of the Roman people) and the “Miraculous Crucifix,” both of which were carried through the city centuries ago in times of plague.

Bishop Lucia drew on the writings of St. Paul, calling the resurrection “the first day of a new creation, a second Genesis, a day in which death becomes not an end in itself, but a Passover — a pass-over into the life of God. From this light shining out of darkness, from the tomb itself, Christ radiates the glory of God, the light of God, to those whom he encounters after the tomb.”

How can the faithful spread this flame? “Might I suggest we can do it in the breaking open of the sacred scriptures and in becoming the bread of life for others, giving them sustenance wherever you and I find ourselves on the road of life these days,” the bishop said. “In these forms we can carry the risen Christ to all whom we meet and bring his light into the public square as well as the dark corners.”

Bishop Lucia closed with a parable to consider during the 50 days of the Easter season. Four men, walking in the woods, come upon a high wall. They build a ladder to see what is on the other side. One by one, they peer over the wall and delight in what they see. The fourth man, seeing the lush gardens, trees, streams, and animals, is tempted to jump down and take in the scene for himself, as the others did.

“Then he thought of his family, friends, and neighbors, and went back to share with them the good news he had discovered.”

Cindy Wooden of Catholic News Service contributed to this report.