Encyclical comes at crucial time with message for all, speakers say 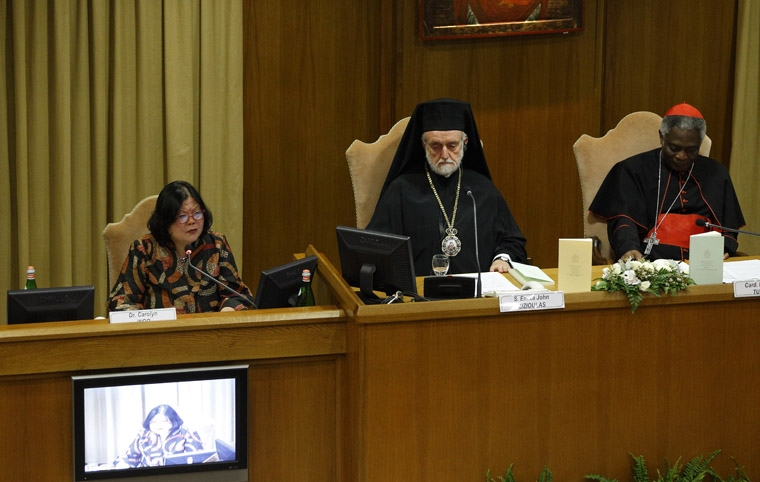 VATICAN CITY (CNS) — Pope Francis’ encyclical letter on creation has come at an crucial time as increasing disregard for life and the environment requires immediate attention and action, said speakers at a Vatican news conference.

There is “food for thought” for everyone in the text, and not liking something one reads in it is not an excuse to dismiss the whole document as irrelevant, some speakers said.

The 180-page encyclical letter, “Laudato Si’, on Care for Our Common Home,” was unveiled during a news conference June 18 in the Vatican synod hall. Foreign ambassadors to the Holy See, Vatican officials, religious and scores of media outlets attended the presentation.

In response to a question about criticism that the pope should stick to theological topics and not touch on science-related pronouncements, Cardinal Peter Turkson said a desire to bar the pope from talking about “science sounds a little bit strange.”

Science isn’t off-limits to the public and anyone can contribute to a discussion or debate, even non-experts, said the cardinal, who is president of the Pontifical Council for Justice and Peace and worked on early drafts of the text.

Even journalists publish and politicians speak out about topics outside their area of expertise, he said, because people talk about the kind of things they think are important.

However, if they choose to be deaf to his voice because he is a religious figure and not a scientist, then that argument reflects an age-old “artificial split … between religion and public life,” he said, “as if religion has no role to play in the public sphere.”

Instead, “reason does have blind spots” that can use the light and fullness of the Christian vision, and “reason can also challenge religion to be concrete and practical,” he said, emphasizing how the two sides need to dialogue and work together as much as possible.

A leading climate scientist, Hans Schellnhuber, said the encyclical is “very unique” because it merges “two strong powers in the world” — faith and reason — into one discussion.

Many of the world’s problems can be solved if the two forces “work together hand in hand,” said the theoretical physicist, who heads the Institute for Climate Impact in Potsdam, Germany; the pope also named him a member of the papal think-tank, the Pontifical Academy of Sciences, June 17.

The document, which presents the church’s spiritual and moral teachings, also drew upon solid scientific consensus and “the overwhelming body of evidence” that says the world’s temperatures are on the rise due to a number of factors, including the burning of fossil fuels, Schellnhuber said.

“It’s time to form alliances,” he said, “and change what is in our power to change.”

Metropolitan John of Pergamon, a noted Orthodox theologian and top aide to Ecumenical Patriarch Bartholomew of Constantinople, a leader in the Christian ecology movement, also spoke at the Vatican news conference.

Pope Francis expressly wanted the presentation to be led by representatives from the Orthodox, Catholic and secular-scientific communities to show how dialogue and alliances were possible.

Metropolitan John said he was deeply honored and grateful to be representing the work of the ecumenical patriarchate, which was “the first in the Christian world to draw the attention of the world community to the seriousness of the ecological problem and the duty of the church to voice its concern” and contribute its spiritual approach to environmental protection.

He said people should be “impressed by the depth and thoroughness with which the ecological problem is treated” in the encyclical as well as its “concrete suggestions and proposals on how to act.”

There is “food for thought” for everyone in the text, he said, including for economists, scientists, sociologists and most of all, Christians, as it provides an analysis of the causes and connections of today’s social, financial, environmental and spiritual crises, as well as a Christian response.

Carolyn Woo was another speaker added to the roster to discuss what is needed to build sustainable economies and businesses. CEO and president of Catholic Relief Services, Woo also served as dean of the University of Notre Dame’s Mendoza College of Business for many years.

She said Pope Francis is “a forward-thinking business leader” because he shows how important it is to face up to and do something about failures, waste and bad morale.
He asks people “not just to rely on market forces or even on technology” without also being guided by human and moral values that call for a higher standard of protecting and respecting the resources they need and people they serve, she said.

“There will be people who will want to dismiss the pope’s message on a basis of lack of evidence,” she said.

But “for business, which is so big on analytics, it is important that it open its mind and heart to evidence. We could not dismiss this just because we don’t like the message from this evidence” that people have not been treating their common home well, Woo said.

Cardinal Turkson said the encyclical and the church do not “presume to settle scientific questions or to replace politics,” but to encourage honest and open debate dedicated to the common good.

“Laudato Si’ can and must have an impact” in building new and sustainable policies and practices, but the “pastoral and spiritual dimensions of the document must not be put in second place” if true, integral and lasting change and conversion are to happen, he said.