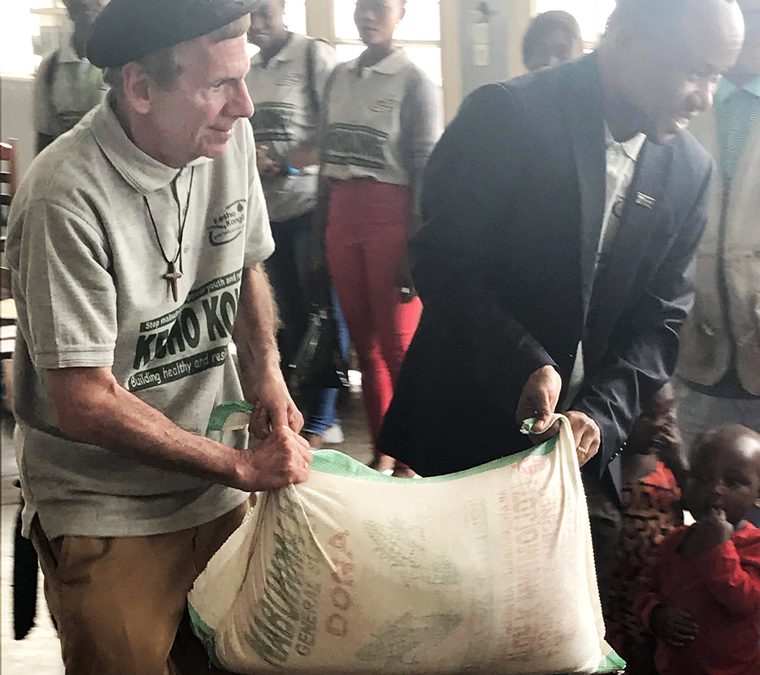 Peter Daino has been chased by a 6½-foot black mamba (a highly venomous snake indigenous to Africa), chased by a hungry crocodile while swimming in a Mozambique lake while swimming and threatened by a spitting cobra that met the end of his shovel. He has survived a plane crash, been shot by bandits and suffered four bouts of malaria.

But the Endwell native, an African missionary and pastoral associate at All Saints Church in Syracuse, keeps going and going, all because of his love and passion for spreading the Gospel to the African people.

On the weekend of Oct. 16, Daino spoke at all four Masses at Church of the Holy Family in Endwell and Most Holy Rosary Church in Maine, sharing what he called “missionary experiences.”

Daino grew up in Endwell, where his home parish was the former Christ the King Church, which became the current Church of the Holy Family. He is a graduate of Seton High School in Endicott and holds a degree in English literature from Buffalo University.

Peter was drawn to the missionary field after a short jaunt with the Peace Corps and landed in Niger.

His missionary vocation has taken him all over Africa for more than the past four decades.  There, he founded four trade schools, an orphanage, 75 nursery schools, a clinic, three hospitals, boarding schools and high schools.

He is currently drumming up support to help the people in Congo who have been devastated by heavy rains that caused a mudslide, which washed away over 3,000 homes.

“Our mission now is to help the farmers plant corn in a new concept called “Woman farming for Woman.” He said the need is for corn seed, fertilizer and gardening tools. “I need your help with this worthy project of hope.”

Peter’s reflection at these Masses is part of the diocesan Pontifical Mission Society’s efforts.  To contribute, send your check made out to Most Holy Rosary Church with Congo notated on the memo line; mail it to PO Box 248, Maine, NY 13802.

Deacon DiLallo is the pastoral associate for Most Holy Rosary Church, Maine.