Even in retirement, he cherished and blessed his parishes 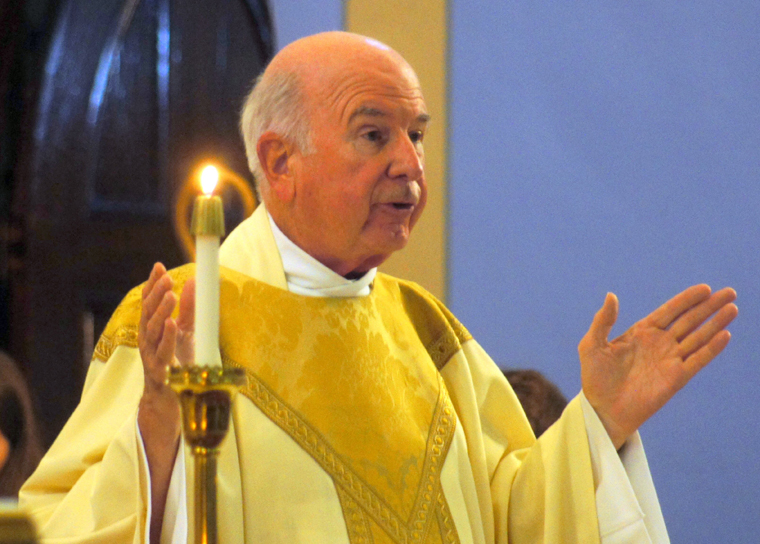 “Father Paul Carey was all about serving others.”

“Father Paul was an intellectual, but not the snooty type.”

“Other than God, Father Paul loved his family most.”

“Father Paul had a great sense of humor, a little dry, a little wry but it was always there. He loved to laugh.”

“Father Paul was everything a priest should be.” 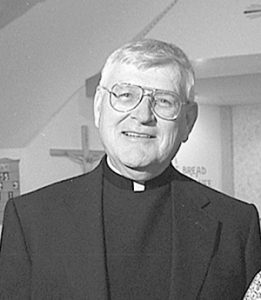 The evaluations were consistent. Parishioners, employees and fellow priests spoke with one voice about Father Paul V. Carey, who died unexpectedly and peacefully at home in Eaton, Madison County, at the age of 78 on Sept. 4. His soul was commended to God in a Mass of Christian Burial on Sept. 10 at his home parish church, St. Bernard’s in Waterville.

The funeral Mass for Father Carey, who had recently celebrated 50 years in the priesthood, began with resident priest Father Jason Hage welcoming mourners. He said Father Carey had been a blessing, a gem and a gift for the four parishes they served together—St. Mary’s Church, Hamilton; St. Joan of Arc Mission, Morrisville; St. Joseph Church, Oriskany Falls; and St. Bernard’s.

Right out of retirement, Father Carey started to work for Father Hage. “His family lake house was in my parish territory,” he said, “so a lot of people said, Oh, wow, we have a retired priest in our midst, this is pretty unique.

“And it became a gift that kept on giving. So I think having a retired priest, having one of our senior priests be a part of communities is a gift that gave blessings more than I can even expect or imagine …, a faithful, holy, good priest who’s been faithful for 50 years of priesthood. … I think that people don’t realize the hidden source of blessing that these retired priests can be for parish communities today.”

If they were welcomed in, cherished and blessed, he added, retired priests in turn could “cherish and bless these parishes.” He thanked the Carey family for “sharing him with us for the past four years. He was really a treasure.”

Father Hage invited the congregation to welcome Bishop Douglas J. Lucia and Bishop Emeritus Robert J. Cunningham to the church. Two dozen priests and deacons followed the two bishops and filled a special seating section at the front of the congregation.

Bishop Lucia acknowledged the large gathering of priests and deacons and expressed his deepest sympathy to the family; Bishop Emeritus Cunningham echoed his successor’s sentiments.

Two of Father Carey’s nieces, both deeply touched by the emotion of the day, delivered readings. Bridget Grieco, daughter of Stephen Patrick Carey, read Wisdom 3:1-9, and Colleen Caprezzuto, daughter of John Carey, delivered the second, Romans 14:7-12. Their fathers are younger brothers of the late priest.

Another longtime friend of the Utica-born-and-schooled Father Carey, Father Henry J. Pedzich, expanded on some of the anecdotes contributed by other priests, friends and parishioners. He emphasized Father Carey’s love of family, of nature and of reading to increase his ability to serve, and his kindness and selflessness.

To illustrate Father Carey’s attitudes on life, family and service in God’s name, Father Pedzich interwove the Sermon on the Mount, Matthew 25:31-40, the 12th chapter of Luke and quotes from Ralph Waldo Emerson, Henry James and Bruce Springsteen.

Father Carey was always reading about topics such as history, philosophy or theology that would help him in his work, Father Pedzich said—“he was always up to date.”

In a humorous note, Father Pedzich mentioned that after the two of them stopped traveling together, Father Carey started collecting wooden nutcrackers: “They were everywhere in his house. Everywhere in the rectory. I told him that he was the Curator of the Unofficial Nutcracker Museum of the Northeast.”

Like Father Pedzich, Father R. Paul Mathis spoke of Father Carey’s nutcrackers: “I think he had over 300 of them. Well, his mother was German and his father was Irish. He also took the St. Joseph’s Choir in Lee Center to Germany to sing. … He was just a good, solid all-around what I call pastor and priest. … He was well liked, absolutely.”

Father Robert L. Kelly said that Father Carey would come to St Paul’s in Rome every New Year’s to entertain and cook for a group of guests, and that he was a truly fine cook.

Father Carey’s nephew Patrick Carey told of high-spirited, good-natured sibling “battles” between his uncle and his brothers; the “Uncle Paul” vs. “Father Paul” nomenclature controversy mediated by their grandmother; and the priest’s happiness when on his deck looking out over Barker Brook or working in his garden. Choking back the tears, nephew Patrick said that Uncle Paul was “far more than just an uncle to me. He was a mentor, guide, confidant and friend … and I will love and miss him until we meet again.”

After the bishops commended Father Carey’s soul to God, pallbearers James and Patrick Carey, Matthew Hayes, and Kyle and Matthew Machovec bore their beloved relative’s casket out of the church to St. Bernard’s Cemetery.

As the last notes of the final hymn, “Amazing Grace,” faded inside the church  and Father Carey’s casket emerged from the church door, another song began: two dozen priests honoring their departed brother with the traditional hymn, “Salve Regina.”

“We know we have lost a good friend,” Bishop Lucia said, “but our liturgy today tells us that we have not lost him and that he continues to pray for us and watch over us. We do recognize that for a while we will be without him but we recognize that we want him to enjoy that heavenly banquet.”

In closing, Bishop Lucia cited an evaluation of Father Carey by the late Bishop James M. Moynihan: “In so many aspects of your ministry you mirror the Good Shepherd.”

Father Carey tales were shared at the “feast” that Father Hage had mentioned in his welcome, created and served by the St. Bernard’s Altar and Living Rosary Society.

Tom McNamara, a longtime member of St. Bernard’s, said Father Carey was “big” on the cemetery committee and had a plan to build a columbarium to accommodate urns of cremated parishioners.

Stephenson said Father Carey started a food pantry in Lee Center, and a woman came in who was unable to feed her children. The food pantry had plenty of cereal so Father Carey gave her a large amount of it. Later the same woman came back with the plight of not having any milk for the cereal. Father Carey then bought powdered milk, mixed it with water and shook up the mix so she could have two gallons to go home with.

Dutifully, they bought the usual roll before learning of his passing; someone suggested that the Stephensons have a “sweet treat” celebration.

One formerly lapsed Catholic in attendance said Father Carey had “brought me back in to the Church.”

She also commented on the Father Carey sense of humor. She said he would dress up as a leprechaun on St. Patrick’s Day and as a cow for Halloween parties.

Cathy Ziemba, organist at St. Bernard’s, recounted that in the first year of her marriage, she had developed cancer and two months after that, halfway into her chemotherapy, her husband, a farmer, had his leg stepped on by a cow and broken in two places. Father Carey responded to their “no-income” plight by starting a second collection for them at St. Bernard’s.

Scott Rutledge, music director at St. Joseph’s in Lee Center, spoke of the St. Joseph’s Choir’s tour not only of Germany and Austria, but Italy as well.

Rutledge characterized Father Carey as a Villanova sports fan, a “Renaissance man” and an intellectual with a deep enthusiasm for the study of world history, a trait Father Kelly had touched on earlier.

“Most of us here are Syracuse fans,” Rutledge said. “Father Carey never missed an opportunity to needle us when the Wildcats (Villanova) were victorious, and we needled him when the Orange won … sometimes with a midnight phone call. When Syracuse won the NCAA national championship [2003], Father Carey turned the tables and called us with congratulations.”

And that was Father Paul Carey … in a nutshell.