Every call of God is a call of love, pope says 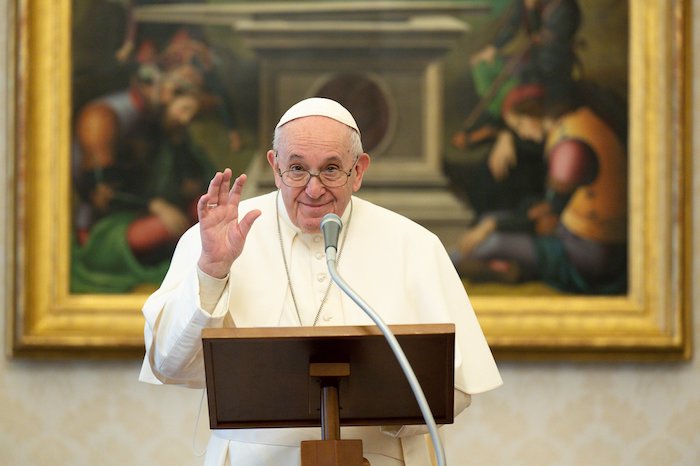 Pope Francis gestures as he leads the midday recitation of the Angelus Jan. 17, 2021, from the library of the Apostolic Palace at the Vatican. (CNS photo | Vatican Media)

VATICAN CITY (CNS) — When a person senses God’s call, it can be intimidating or frightening, Pope Francis said, but Christians can be sure that the call flows from God’s love and that responding to the call will be a means of sharing God’s love.

“Each one of God’s calls is an initiative of his love,” the pope said Jan. 17 before reciting the Angelus prayer. “God calls to life, he calls to faith and he calls to a particular state in life: ‘I want you here.'”

Livestreaming his Angelus address from the library of the Apostolic Palace, Pope Francis focused on the day’s Gospel reading, which recounted Jesus calling Andrew and Simon Peter to be his disciples.

Pope Francis said it is interesting to note that when the two ask Jesus where he is staying, Jesus does not respond with information, but with an invitation, “Come and you will see.”

And another thing “that catches our attention: 60 years later, or maybe more,” St. John wrote in his Gospel that “‘it was about four in the afternoon’ — he wrote the time,” the pope said. “Every authentic encounter with Jesus remains alive in the memory; it is never forgotten.”

Life is a series of God’s calls, the pope said. “God’s first call is to life, through which he makes us persons; it is an individual call because God does not make things in sets. Then God calls us to faith and to become part of his family as children of God.

“Lastly,” he said, “God calls us to a particular state in life — to give of ourselves on the path of matrimony, or that of the priesthood or the consecrated life. They are different ways of realizing the plan God has for each one of us, always a plan of love.”

“The greatest joy for every believer is to respond to that call, offering one’s entire being to the service of God and one’s brothers and sisters,” the pope said.

God’s call, he said, can “reach us in a thousand ways — including through other people or happy or sad events.”

Sometimes people are tempted to say “no” to God’s call out of fear or because “it seems to be in contrast to our aspirations” or they believe it may be too demanding, the pope said.

“But God’s call is always love,” he said. “We need to try to discover the love behind each call, and it should be responded to only with love.”

At the end of his Angelus address, Pope Francis offered prayers for the people of Sulawesi, Indonesia, where an earthquake Jan. 15 and dozens of aftershocks left at least 46 people dead, hundreds injured, and thousands homeless.

The pope also encouraged Catholic to participate in the Jan. 18-25 Week of Prayer for Christian Unity.