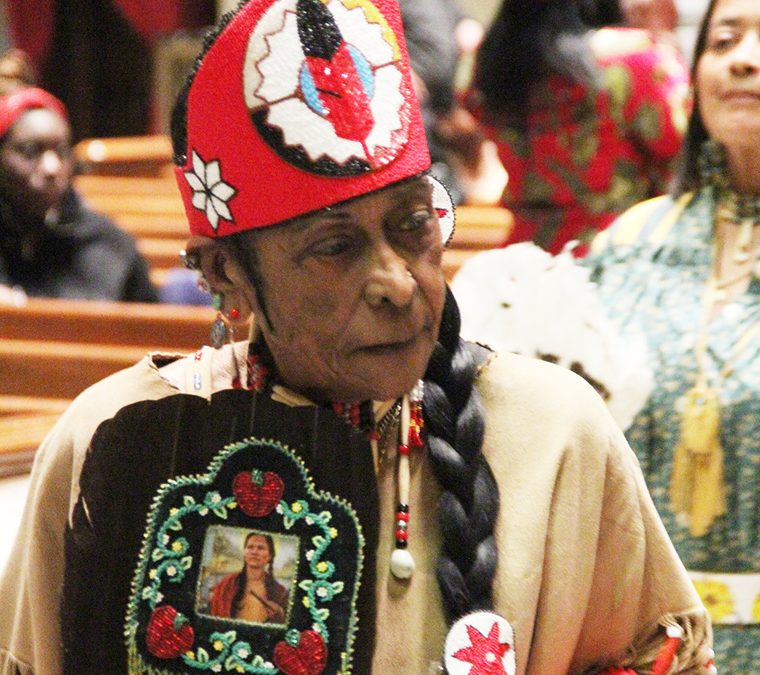 By Gina Christian | Catholic News Service
PHILADELPHIA (CNS) — Thanksgiving should be a daily attitude rather than an annual observance, according to an American Indian leader in Pennsylvania.

Chief Buffy Red Feather Brown, leader of the Southeastern Cherokee Confederacy of Pennsylvania Earth Band, says that a true appreciation for God’s many gifts makes “every day a day of Thanksgiving.”

“I thank God when I wake up that I can see, that I can walk,” said Red Feather. “I look at the bottom of my foot for an expiration date, and when I don’t see one, I thank God I’ve got another day.”

A devout Catholic who fully embraces both her faith and her Cherokee heritage, Red Feather noted that many Native Americans do not observe Thanksgiving for several reasons.

Gratitude, continuously expressed, is already integral to American Indian cultures, so a single — and often highly commercialized — commemoration is regarded as a “false celebration,” she told CatholicPhilly.com, the news outlet of the Archdiocese of Philadelphia.

In addition, the U.S. holiday’s origins recall the deeply conflicted history of relations between American Indians and immigrant settlers.

In 1621, European colonists at Plymouth — located in what is now the state of Massachusetts — gathered with several Wampanoag Indians for a harvest feast that later inspired days of thanksgiving in various states. A national holiday was established by President Abraham Lincoln in 1863.

Despite the celebration at Plymouth village, whose settlers relied on extensive assistance from the Wampanoag for survival, interactions between colonists and various indigenous nations were largely tragic. According to the Smithsonian’s National Museum of the American Indian, “European contact resulted in devastating loss of life, disruption of tradition and enormous loss of lands for American Indians.”

Red Feather’s own family was almost wiped out during the Trail of Tears, the federal government’s forced relocation during the 1830s of Indians in the southeastern U.S. to territory west of the Mississippi River. An estimated 100,000 indigenous residents were driven from their homes, with approximately 15,000 perishing en route.

“My people were in North Carolina 1838,” said Red Feather, who regularly represents her tribe at the Philadelphia Archdiocese’s annual cultural heritage Mass. “When the soldiers came to force them onto the trail, my ancestors went into the mountains and stayed there until the soldiers left. When they came back down, they had to start rebuilding their lives.”

The Trail of Tears is one of many key historical events highlighted during Native American Heritage Month, designated as November by President George H.W. Bush in 1990. The National Museum of the American Indian stresses that indigenous nations should be viewed as complex, dynamic societies, rather than one-dimensional stereotypes, since “there is no single American Indian culture or language.”

Philadelphia Archbishop Charles J. Chaput, whose mother’s ancestry is mostly Potawatomi Indian, said in an email to CatholicPhilly.com that “it is important not to forget the original peoples of this land.”

In contrast to European explorers’ perceptions, “we weren’t ‘discovered,'” noted Red Feather. “We were already here for centuries, and mostly living at peace.”

The effects of earlier European contact continue to impact American Indians, who currently experience disproportionately high levels of poverty, disease, suicide, violence, addiction and marginalization. Despite such daunting challenges, indigenous cultures remain vibrant, demonstrating their “persistence, creative adaptation … and resilience,” according to the National Museum of the American Indian.

“The history of the relationship of our country with native people is a mixture of sadness, misunderstanding and even hope,” Archbishop Chaput said.

Facing the future while holding onto one’s heritage is essential, Red Feather pointed out.

“We are trying to always remember the past, but not live in the past,” she said.

These days, Red Feather particularly focuses on protecting the unborn and the environment, noting that “God made all things, and we are the caretakers of the earth.”

She also emphasizes the need to pass on faith — and a deep sense of gratitude — to the next generation, especially as the Christmas season begins.

“So many things are pushed onto young people through the media, and they don’t know the real significance of these holidays,” she said. “We need to remind them that every day is a day of thanksgiving, and that they need to remember the true meaning of Christmas.”