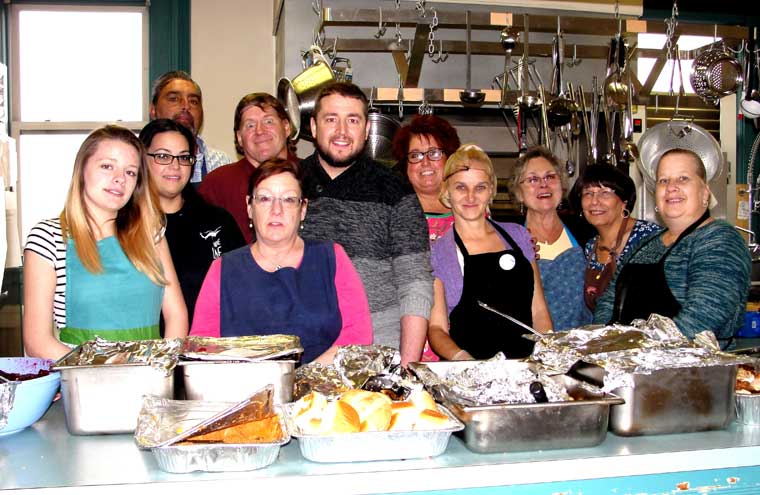 UTICA — Kevin Shelanskey called the 27 volunteers together to give last-minute Thanksgiving Day instructions prior to opening the doors at Mother Marianne’s West Side Kitchen (at St. Joseph – St. Patrick Parish).

Before assigning people to their posts, he first made an appeal.

“I just met a family out there that doesn’t have enough money to buy diapers for their children. Can we come up with some money and get diapers for them?”

The volunteers began reaching into their pockets and pulling out one-, five-, 10- and 20-dollar bills. Within seconds, $113 was handed over to two women who volunteered to go on a diaper run. Trish LaBella and Lisa Morgan returned with enough diapers and baby wipes to hand out to several families who came in from the freezing rain to enjoy a traditional turkey dinner with all the trimmings.

“It’s a side effect of what we’re doing, but it’s awesome,” said Shelanskey, who chaired the soup kitchen’s Thanksgiving effort. A counselor at John Bosco House, a transitional residence for young men, and a U.S. Army veteran, he was deployed to the World Trade Center on Sept. 11, 2001, and then to Afghanistan.

Not quite sure how many people to expect, chef Bill Bogan, Shelanskey, and the rest of the crew prepared over a dozen turkeys, 60 pounds of potatoes, and 20 pounds of stuffing, plus vegetables, squash, and sweet potatoes. And, thanks in large part to the Knights of St. John, some 135 pies were donated.

Shelanskey said they ended up serving about 100 people. Greeters wished them a Happy Thanksgiving and directed them to sit at a table of their choice. Servers quickly followed with trays of a full turkey dinner, and before they were finished, New Hartford Boy Scout Troop 4’s Zachery Connolly and Christian Sierson made the rounds with trays of desserts and whipped cream.

Several families came to volunteer, all having a similar purpose: as parishioners, “we feel good to give back to the community; I feel pride,” as Michele Connolly noted; “to give back and see smiling faces,” as Giovana Annatone said;  “to help out” and “teach their children” about assisting people in need, as Vikki Commisso put it.

Shelanskey himself said something similar, pointing to “community service” as a way to keep youth well-balanced and grounded, as he watched his high school freshman daughter, Ashley, pitch in. “It hit home for her,” he noted, especially after seeing someone she knew from school come in for a hot meal.

Perhaps volunteer Patty Nessel, there with family and friends, summed it up best:

“Everybody becomes family, including people you don’t even know.”

Mother Marianne’s West Side Kitchen is named after parish daughter St. Marianne Cope, who attended school and grew up in the parish before becoming a Franciscan sister.