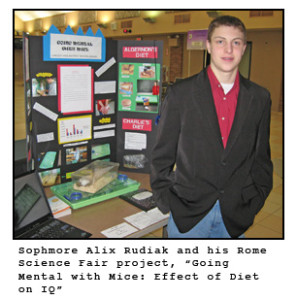 ROME, N.Y. — The future for students at Rome Catholic School (RCS) is bright. The preschool through grade 12 community  offers students an academic and spiritual education preparing them for life beyond the classroom.

The 2008-2009 school year at Rome Catholic has been dedicated to service in school and in the community. The one building concept at RCS naturally fosters multi-age interaction. The fifth and sixth grade classes share “buddy-time” with kindergarten students. Students are paired  for crafts and reading time every week.

High school students often volunteer in the elementary classrooms. Senior Megan Stevens remarked how her time with kindergarten and second grade students has inspired her to pursue a career in education.

In February, the entire school participated in a day-long service project involving the Rescue Mission and Bethany Gardens. Grades K-six decorated bags for sandwiches that were prepared by grade seven through 12 students and were delivered to the Rescue Mission and Bethany Gardens by the senior class. A multi-age learning environment benefits the older and younger students and strengthens the school community.

Rome Catholic has been deemed a model school by the Syracuse Diocese in its successful merger into a multi-grade school, and the school has also become a leader in technology. RCS was recently visited by staff from Bossier City Public School of Louisiana. Educators and administrators toured the school to learn how to integrate a Cyber Security Program, already established at RCS, into their schools. This day-long tour focused on course work and demonstrations and applications by Cyber Security students.

In 2006, the technology department at Rome Catholic launched video conferencing. Video conferencing technology enables classes to interact with people from around the world or to take virtual tours of historical sites and museums.  In January, the school acquired two grants from the Heritage Endowment Fund to advance technology programs. The first grant in partnership with Bishop Grimes High School in Syracuse, will equip them with a Tandberg Video Conferencing System, much like the unit RCS is currently utilizing. Together the two schools will offer courses using video conferencing to expand curriculums and share personnel.  The second grant expands the established robotics program, currently offered to junior and senior high students, to include elementary grades four to six. The robotics club made up students selected from fourth, fifth, and sixth grade levels was successfully piloted. The club teamed up with a Jr. High and Sr. High student, currently in the robotics program, to build and program robots that were entered in the robotic competition at SUNY-IT on March 12th. 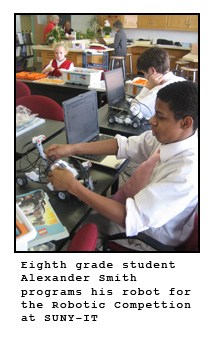 Rome Catholic Senior Fair projects were also featured at the Greater Syracuse Scholastic Science Fair, sponsored by The Milton J. Rubenstein Museum of Science Technology (The MOST) at Solvay High School on March 29.

The future is certainly bright for students at Rome Catholic. The students demonstrate their faith by service to their school community.  In addition, the school provides an environment that fosters academic excellence that prepares students to succeed in an ever-changing world.