SOLVAY — A group of almost 20 teens and youth ministers representing the parishes of DeWitt, Camillus, Solvay, Liverpool, Cazenovia, Baldwinsville and the diocesan Catholic Deaf Community met on March 31 at the parish center of St. Cecilia’s in Solvay. They  gathered to share ideas and discuss the methods they would use to get the message out about the upcoming diocesan-wide Vigil for Peace. 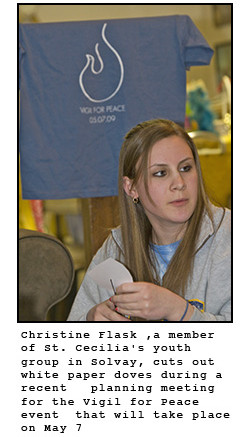 The youth are inviting people from all places of worship and community centers to gather on the evening of May 7, the National Day of Prayer, to pray for peace. The teens feel that  churches participating in this vigil with prayers, songs and poems will help to end violence in the streets, schools, families and in the world.
“It’s something that I’m really looking forward to,” said Christine Flask, a St. Cecilia parishioner and a junior at West Genesee High School in Camillus. “It’s something that the world needs and the vigil is a symbol of the community gathering together in one place at the same time — it’s awesome.”  Christine participated in last year’s vigil by singing at her parish.
Christine’s brother, Nate, a St. Cecilia parishioner and a freshman at West Genesee High School, attended the planning meeting that night with his sister. “It sounded interesting and I think the vigil is a good idea — our world needs peace,” Nate said.

The National Day of Prayer is a day designated by the U.S. Congress as a day when all Americans, regardless of faith, are asked to come together and pray in their own way. It is held on the first Thursday in May. On April 17, 1952, President Harry S. Truman signed a bill proclaiming the National Day of Prayer into law. The idea to hold the Vigil for Peace got started in February 2008 when St. Cecilia’s Father Paul Machira delivered a homily that told of the violence of war in his native village in Kenya.

After hearing Father Machira’s story, Brianna Condon, 12 years old at the time, asked her mother, St. Cecilia parishioner and youth minister Terri Condon, “What can we do to help?” Before long, Condon had come up with an idea. Her initial idea was to hold a diocesan-wide all-night Vigil for Peace. When Condon suggested it to some other youth ministers in the area, they were excited about the prospect.

The first Vigil for Peace was held last year on the evening of May 1. St. Ann and St. Daniel Parishes, both in Syracuse, St. Augustine in Baldwinsville, St. Joseph in Camillus, St. Cecilia in Solvay, the Catholic Community of Fulton and St. Mary in Oswego all hosted the Vigil.

“It was wonderful last year,” said Condon. “We had a great turnout at St. Cecilia’s. As part of the vigil, the World Mission rosary was recited. Each decade, every one a different color, was recited in the language that corresponded to that particular country. The people who came to the vigil loved it.” Condon also said that teens from St. Cecilia’s and St. Joseph’s in Camillus participated in liturgical dance at both churches.

Although each parish celebrated the vigil in its own unique way, the youth asked all churches to line their entrance walkways with luminary bags and to end the vigil outside the church with everyone holding candles and reciting the same prayer at the same time — 8:55 p.m.

Condon said the number of churches participating in the event has increased. St. James Church in Cazenovia and Holy Cross Church in DeWitt will also hold the vigil this year. She recalled that 12 churches participated last year and is hoping to add a few more to the list every year, especially churches from the inner-city. Just as they did last year, the young people are advertising the vigil by wearing specially-designed t-shirts to school one or two weeks before the event. The t-shirt’s design is different this year. The shirt is denim blue with the phrase “Give Peace a Chance” printed vertically on one side of the front while the back of the shirt sports a logo which consists of a white dove in the shape of a flame. The shirts can be purchased on the youth’s Web site www.vigil4peace.org.
At the meeting, Condon encouraged the young people to invite people to the vigil using their personal Facebook pages.

The vigil has also been advertised with a flier entitled “Vigil for Peace,” which has been sent to local schools and to organizations outside of the Catholic community. It has also been advertised in church bulletins.
Younger children in religious education classes are being encouraged to cut out and decorate paper doves to be displayed in church vestibules. The children are also encouraged to write poems about their own perception of peace to be recited during the vigil.

During the meeting, the young people also discussed possible songs that could be used at all the churches on the night of the vigil. Condon asked the teens to devise a play-list of possible songs to be brought to the next meeting. One song will be chosen to be used at the vigil.

Christine Werbeck, religious education teacher and CYO advisor at St. Cecilia’s, also attended the meeting. “The vigil is really a help for the youth,” she said. “They’ve grown up in a complicated world in which they deal with more and more violence every day. They want our future to be peaceful.”

The youth’s Web site gives suggestions on how to celebrate the vigil, craft ideas for children, t-shirt information, churches that are participating and much more.

For more information about the Vigil for Peace, check out the Web site or contact Terri Condon at TerriCYO@twcny.rr.com.