Faith is passed on at home, pope tells parents at baptism 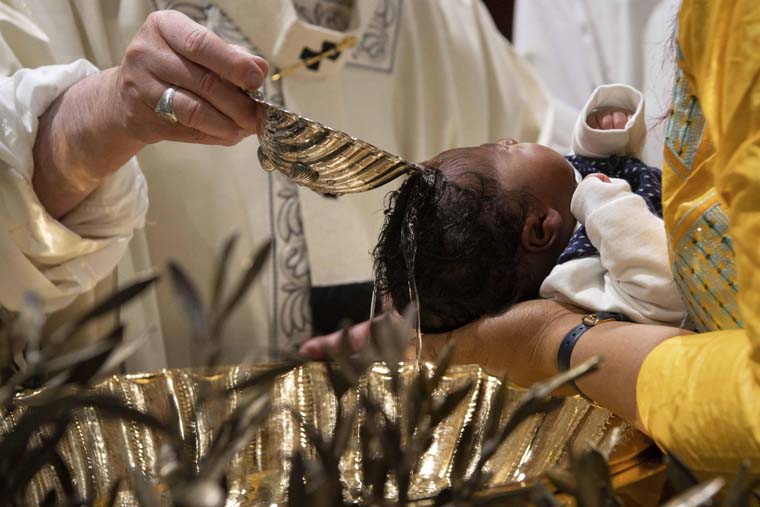 VATICAN CITY (CNS) — Faith isn’t something learned just by studying the catechism but rather is a gift passed on to children by the example of their parents, Pope Francis said.

The pope celebrated the Mass and baptisms Jan. 13, the feast of the baptism of the Lord, in the Sistine Chapel.

As the lively sounds of babies’ squeals and cries filled the frescoed Sistine Chapel, the pope said babies often cry when they are “in an environment that is strange” or because they are hungry.

Repeating his usual advice to mothers of infants, the pope urged them to make their children comfortable, and “if they cry because they are hungry, breastfeed them.”

Children “also have a polyphonic vocation: One begins to cry, then another makes a counterpoint, then another and in the end, it is a chorus of cries,” he said.

Offering a piece of advice to parents, the pope called on them to pass on the faith by letting their children see their love and refrain from arguing in front of them.

“It is normal for couples to argue, it’s normal,” he said. “Do it, but don’t let them hear, don’t let them see. You don’t know the anguish a child has when he or she sees parents fighting. This, I may add, is advice that will help you transmit the faith.”

Later, after praying the Angelus with pilgrims in St. Peter’s Square, Pope Francis asked those gathered to pray for the newly baptized babies and their families. He also asked them to “keep the memory of your own baptism alive.”

“There you will find the roots of our life in God; the roots of our eternal life that Jesus has given us through his incarnation, passion, death and resurrection,” he said. “Our roots are in baptism.”