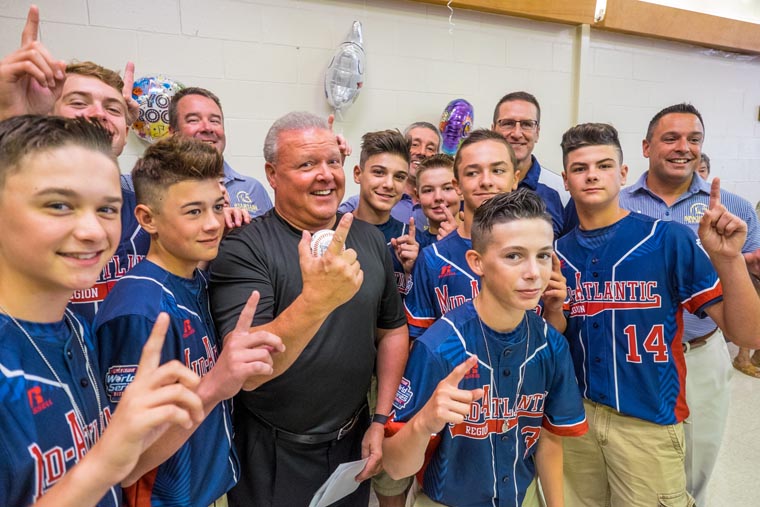 Little League champs come home to their church in Endwell

Endwell  — The Maine-Endwell Little League team made a triumphant return to the community just a day after winning the World Series in Williamsport, Pa.

Dozens of law enforcement, fire, and emergency vehicles with lights flashing and sirens blaring led the way. Vehicles with family members were just ahead of the bus carrying the players.

Thousands came out to greet them on Aug. 29. Among the spectators was Father Clarence F. Rumble of the Church of the Holy Family in Endwell: pastor to most of the team and coaches.

M-E Little League went 24-0 for the season, finishing with a 2-1 victory over the Asia-Pacific team from South Korea. By the time M-E had advanced to the final, it was known as the Mid-Atlantic team.

In the days since the victory, the team has appeared with the New York Mets and Yankees, as well as the Binghamton Mets. But their welcome to Mass at Holy Family on Sunday, Sept. 11, was different.  Six of the 11 players and all of the coaches are parishioners.

As Mass started, Father Clarence mentioned the day — 15 years since the “darkest of days in history” with the 9-11 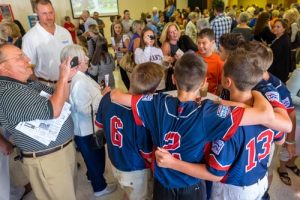 attacks — which he noted happened before the team members were born.

“One event was tragic and one is celebratory! Today during this Mass of Thanksgiving, we rejoice in this team’s accomplishments on and off the field,” he said.

“Be thankful for your God-given talents which you have developed and strengthened with perseverance and hard work,” said Father Clarence.  “Your talent, your joy, your compassion, and your sportsmanship are just a few of the reasons this parish community is very proud of you.”

Hundreds of people jammed the pews. Dozens of others stood in the back.  Many wore the blue and gold shirts of Maine-Endwell or the blue and red of the Mid-Atlantic team.  In addition to the championship, the team received the Jack Losch Team Sportsmanship Award.

Players and coaches had walked down the center aisle at the beginning. Each was given a part, taking up the gifts, offering petitions, and doing the readings.

Jude Abbadessa read from Exodus.  Later, he reflected on similarities between delivery of words at Mass and baseball.

“I was confident in both.  I was worried in both.  I just did it,” Abbadessa said, adding that he takes his mom’s advice.  “Just read loud and slow. And for baseball, just play your own game and have fun playing.”

Alicia Abbadessa was featured in close-ups on national TV coverage of the baseball games, often looking away when her son pitched or batted. Not so for Mass.

“It was good that he was reading up there. Jude actually practiced each day once he got the reading,” she said.

Jude called his mom every night while on the road with the team.

“I would ask about his day. And what I would just say is remember:  Say your prayers, be kind, be humble. And just basically thank God,” she said.

“He could walk off that field and come home knowing that he did his best,” Abbadessa added. “All the boys knew where their talent and everything came from and it comes back to church, it comes back to family. It comes back to their friendships and the coaches too.”

Conner Rush read from St. Paul’s Letter to Timothy at the Mass.

“I think it was good to get back and just be able to be normal,” he said.    “Usually when we come to church, we’ll just sit down. And I would think it would be so easy to read. But when you get up there it’s actually so hard. And you’re so nervous,” Conner added.

Conner didn’t think it was as hard as baseball.  But he thought winning the Little League World Series could not have come “if we didn’t have our God-given ability.”

“And you always needed a little bit of luck so that definitely helped too,” he said.

Conner’s dad, Scott, is manager of the team. Along with the other adults, he made use of time away from home to converse with the boys about things other than baseball.

“We talked a lot about how to carry yourself, how to treat other people with respect, on and off the field. As 12-year-olds, we were happy that at least some of it sunk in and they were a great group of kids. I think their faith and the way they were brought up by their parents goes a long way into how they carry themselves,” said Scott Rush.

That support included a letter of congratulations from Bishop Robert J. Cunningham.

Each player received a copy along with rosary beads blessed by the pope.

The bishop referred to Hebrews 12:1-2: “We are surrounded by so great a cloud of witnesses.”

“I, also, extend my gratitude and congratulations to your coaches, families, siblings and friends — your own “cloud of witnesses” who gave up much to support you,” the bishop said.

The team was welcomed into the social hall after Mass. They presented a check for $2,500 from M-E Little League for Mercy House, a home for those with terminal illnesses. Hundreds of people gathered at the reception.

“It’s just nice to see them.  I’ve seen pictures of them. But to see them up close … they’re part of our parish,” said parishioner Janet Barna. ”It’s really special.  I’m thrilled.”

Parishioner Paul White was wearing a championship T-shirt. He grew up in Williamsport before organized Little League existed. A member of a Catholic baseball league championship team as a youth, he returned to his hometown to see Maine-Endwell play.

“God bless them.  I hope they continue in the church and out in the world,” White said.