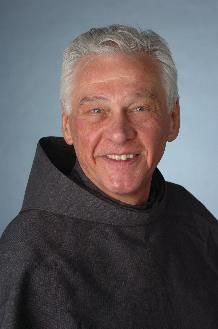 A beloved friend, mentor, colleague and confidante was honored Dec. 5 as the funeral Mass for Father Linus DeSantis, OFM Conv., was celebrated at the Franciscan Church of the Assumption in Syracuse.

Born Sept. 7, 1943, Father DeSantis entered the Franciscan Friars Conventual in 1961, professed his vows on Aug. 15, 1962, and was ordained to the priesthood on May 22, 1971. He held a Master of Divinity degree from St. Anthony on Hudson, Rensselaer, N.Y., and a Master of Arts in English from the University of Dayton.

A Kennesaw shirt was among the memorabilia displayed at the funeral, next to a well-worn copy of a Peanuts book entitled Linus on Life. Dozens of photos showed Father DeSantis beaming at weddings and baptisms and laughing with friends  — one shot caught him smiling on a swing in full flight, his head thrown back.

He recalled his days as a young postulant when Father DeSantis, then his guardian, would tell him that another postulant was his favorite. But the postulants eventually figured out that he told each of them that someone else was his favorite. “We were all Linus’ favorite,” he said.

“We have all received from Linus words that educated, that consoled, that challenged, that lightened a burden, that made us laugh; words that perhaps baptized your child, sealed your marriage covenant, and brought you into communion with the word made flesh, Jesus Christ. And they, those words, are gifts to us that remain,” he said.

Syracuse University Campus Minister Maggie Byrne shared a reflection on the “Memories of Father Linus DeSantis” Facebook page, which she also shared with the Sun.

“When I first started at the Catholic Center at SU I had absolutely no idea what I was doing (still don’t actually). It was my first job out of college and I was all kinds of intimidated by this loud, eccentric, randomly-singing, Croc-&-sweatpants-wearing, eyebrow-raising Franciscan.

“The first few months were rocky and I don’t think either of us were sure about the other. But he gave me a chance and saw something in me that I didn’t even see. It wasn’t until my grandma died unexpectedly that I realized what kind of man he was. He gave me all the time I needed. He showed up and concelebrated her funeral Mass. He offered to do an extra private memorial Mass for my family. And treated me with the compassion, generosity and respect I would have expected only from a friend of many years, not a boss of a few months. He had his quirks and foibles. And he was a good, good man.

“He told me that week something I’ve since heard him tell many students in times of mourning: think of the person you love who has passed and pick one characteristic, one virtue that inspires you and adopt that as your own in their memory and honor. With my grandma it was kindness and it changed me. For Father Linus, it will be faith in the people around me.”

A packed house at Hendricks Chapel shared a moment of silence to remember Father DeSantis at the start of Sunday’s community-wide Holidays at Hendricks concert.

Father DeSantis will be interred in the Friars’ Plot at St. Stanislaus Cemetery in Baltimore, Md. Memorial donations may be made to the Franciscan Education Burse, 12300 Folly Quarter Rd., Ellicott City, MD 21042.