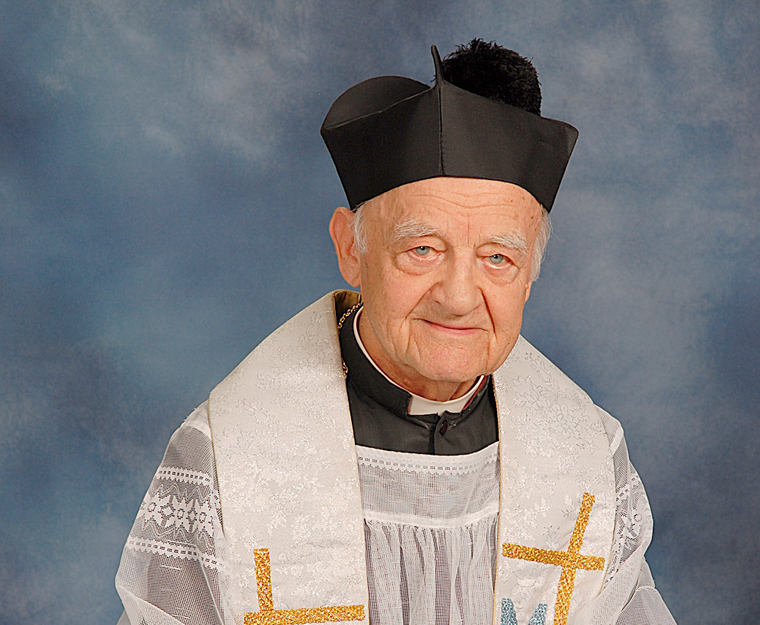 At his ordination in Kielce, Poland, in 1952, Father Stanley Dudkiewicz “became a priest of God forever,” Father James Serowik said Jan. 16. “From that moment on, Father Dudkiewicz lived his life for Jesus Christ.”

Father Dudkiewicz died Jan. 5. He was 96 years old, the oldest priest serving in the Diocese of Syracuse. His ministry in the diocese included two years at Holy Trinity Church in Utica and 36 years at the Basilica of the Sacred Heart of Jesus in Syracuse.

Father Serowik, pastor of St. Vincent de Paul Blessed Sacrament Parish in Vestal, said he was surprised to learn Father Dudkiewicz wanted him to preach at the funeral Mass.

“I thought and I reflected and I prayed,” Father Serowik recalled in his homily. “I had a dream that night, and who should appear in that dream but Father Dudkiewicz himself. In that dream I was having a conversation with him and I said, ‘What have you done?’” Father Serowik spoke the priest’s response in Polish, then translated it to English: “‘Why don’t you say a few words in Polish, but remember — the most important thing is that it’s gotta be short.’ Such was Father Dudkiewicz.”

Born in Kielce, Poland, on May 8, 1924, the Feast of St. Stanislaus, Father Dudkiewicz “would tell me every year on his birthday that is the reason why he was named Stanislaus,” Father Serowik said. Father Dudkiewicz’s birthday was also the occasion for his annual vacation to Detroit, where he would visit his niece, Anna, and her children, Marie and Robert. “How important you all really were to him,” Father Serowik said. “How much joy you all brought to Father Stanley.”

After World War II, Father Dudkiewicz finished high school and entered seminary; he was ordained in Kielce on March 22, 1952.

“While Father Stan was in Poland, he served in different pastoral assignments,” Father Serowik said. One assignment was as pastor of Blessed Virgin Mary Parish in Bolmin, which was “an interesting assignment for him because very often, his bishop would come a few times to visit him throughout the year. His bishop at the time was Bishop Karol Wojtyła, later to be known as Pope John Paul II.”

In 1970, the political situation in Poland was difficult, Father Serowik said, and Father Dudkiewicz came to the United States, living in Detroit. He connected with his friend from seminary, Msgr. Casimir Krzysiak, who was serving at Holy Trinity Parish in Utica. Father Dudkiewicz would later join him at the parish, serving there from 1973 to 1975.

“But then truly came a life-changing time in his life,” Father Serowik said — his assignment to Sacred Heart Church in Syracuse. Father Dudkiewicz would go on to serve the parish for 36 years.

“It was in 1987 that I began my part of the journey with Father Stan,” Father Serowik recalled. “It was interesting times for me in the parish back then. I was suffering from a disease that every priest suffers from: that disease of ‘newly-ordained-itis” — how you were going to come into the parish and you were going to change everything and really make a difference and do what you’re called to do in serving God’s people.

“Well that lasted, for me, about 10 minutes before I realized that which I did not know and the wealth that was around this parish, around the dinner table at the rectory, which always had dinner in the Polish language,” he remembered. “I couldn’t believe all that I learned about what it meant to be a priest, about what priesthood meant, what was the rhythm of studying priesthood and living the life of a priest.”

Over the years, Father Dudkiewicz and Father Serowik developed a partnership, working together to minister to the parish community.

Father Dudkiewicz offered to take Father Serowik’s Monday night shift monitoring phone calls to the parish, just one way “Father Stan taught me what priesthood and generosity was really all about.”

“He said, ‘You give me the homily early in the week and I’ll translate it for you,’” Father Serowik said. “‘But remember it’s gotta be short. Polish people don’t like long homilies.’”

“I became a better priest because of what happened with Father Stan and I, for just as in the Gospel today, the two disciples were walking that journey, walking together, sharing life, sharing experiences, they came to recognize that person walking with them was none other than Jesus Christ…

“How many times we concelebrated Mass together, sometimes in Polish, sometimes in English. But as I journeyed and walked with Father Stan, I was truly able to recognize Jesus Christ present — not only in the breaking of the bread, but Jesus Christ was present in his priest, Father Stanley Dudkiewicz.”

Father Serowik closed with a reflection by the Catholic Golden Age Society meditating on the hands of a priest, anointed at ordination to minister to the people he’s called to serve, from administering sacraments to writing homilies to preparing retreats and missions.

“We wish we could take you by your hand and stand at the busiest intersection in Syracuse and shout to the world, ‘Look everyone! This is our beloved priest in whom we are well pleased!’ These hands of yours are the hands of the Sacrament of Orders. We reverence them and we could not have lived our lives without them, without you. Thank you for being and faithfully loving us. We are so proud that you were our beloved priest.”