Father Tucker remembered as ‘a good man and a good priest’ 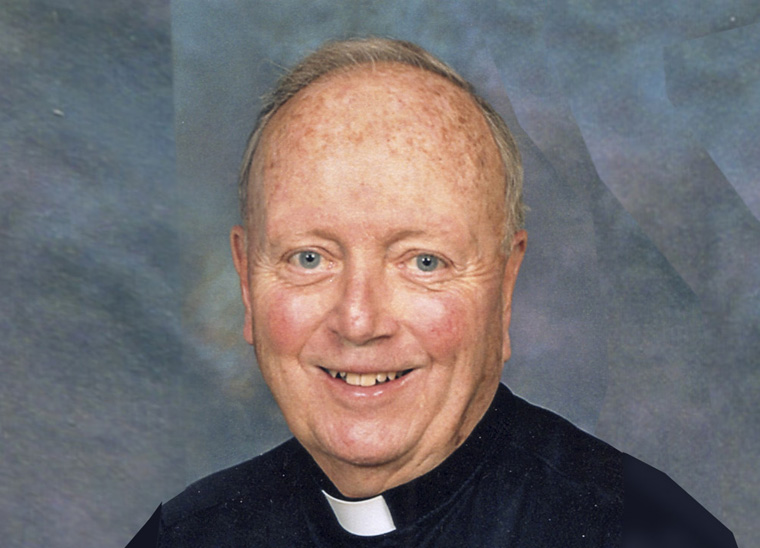 It was an honor to know Father Richard Tucker “because what you saw was not what you got. He had a lot more to himself than you saw,” said his friend Father Paul Angelicchio. “He was a kind, gentle, and good priest.”

The liturgy’s second reading came from St. Paul’s Letter to the Romans: “Are you unaware that we who were baptized into Christ Jesus were baptized into his death? We were indeed buried with him through baptism into death, so that, just as Christ was raised from the dead by the glory of the Father, we too might live in newness of life” (6:3-4).

Father Tucker’s “baptism took place here in this parish,” Father Angelicchio, pastor of Transfiguration and St. John the Baptist churches in Rome, said in his homily. “His faith journey began at Most Holy Rosary.”

After graduating from Syracuse’s Central High School in 1945, Father Tucker enlisted in the United States Navy and served in World War II. On returning home, he enrolled at Le Moyne College “where he made lifelong friends and proudly was a member of Le Moyne’s first graduating class,” his obituary noted.

Following a short stint selling plumbing, heating, and industrial supplies for a manufacturing company, Father Tucker “made the decision to enter the priesthood, attributing that decision to the Jesuits at Le Moyne,” according to his obituary.

Father Tucker studied for the priesthood at St. Bernard’s Seminary in Rochester and was ordained for the diocese Feb. 3, 1958, at the Cathedral of the Immaculate Conception in Syracuse. His priestly ministry included service as associate pastor at St. Ann’s in Syracuse, St. Matthew’s in East Syracuse, and St. Mary’s in Oswego, and as pastor of St. Louis in Oswego and St. Ann’s in Syracuse. He retired from full-time ministry in 1986, but continued to serve the faithful of the diocese, helping, among others, Father Angelicchio during his time as pastor of Holy Family and Our Lady of Pompei churches in Syracuse.

Father Tucker would prepare beautiful, typewritten homilies, Father Angelicchio remembered, drawing on the lectionary and commentaries; he even helped candidates in the permanent diaconate program with homiletics.

The liturgy’s Gospel reading included a promise from Jesus Christ himself, Father Angelicchio said: “And if I go and prepare a place for you, I will come back again and take you to myself, so that where I am you also may be” (Jn 14:3).

“Last week, the Lord came for him,” Father Angelicchio said. “The Lord stretched out his hand, and said, ‘Come home. It’s time. You’ve done your work. You were a good priest, you brought the people the Sacraments, you forgave them their sins, you celebrated the Eucharist. You did exactly what I asked you to do; now come home.’”

Bishop Lucia shared with the congregation an excerpt from a letter Father Tucker wrote to then-Syracuse Bishop James M. Moynihan in 2002. Quoting a framed reflection he often referred to, Father Tucker wrote: “Our joy in being priests does not rest on a better definition of the priesthood and not even on an experience of its effectiveness, but on the total trust which we place in the Lord, who has called us in our weakness to participate in His ministry. We affirm with St. Paul: ‘I know whom I have believed and I am certain that He is able to guard the trust committed to me until the day of his return (2 Tim 1:12).’”

“And so dear brother,” Bishop Lucia said, “it is our prayer, it is our confidence, that the Lord has prepared a place for you.”