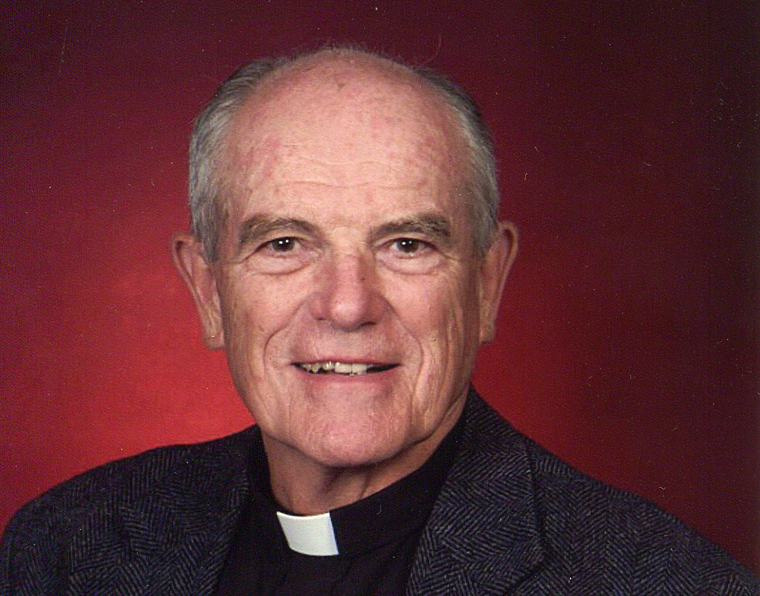 Every pew at Sacred Heart Church in Cicero was filled on Mon. Sept. 21, 2015, as family, friends and clergy gathered to remember and celebrate the life of Father William C. Esposito, 82, who passed away on Sept. 16, 2015.

Father Esposito is survived by his uncles, Joseph (Mitzi) and Vincent (Alice) Esposito; his aunt Norma Esposito; his cousin, Frank Esposito; and a large extended family.

“Father Bill simply has passed through to the other side of life,” stated Father Gehl, former pastor of Sacred Heart Parish during the funeral Mass for Father Esposito. “He lived out his faithfulness to the Gospel…his vocation to the priesthood, and he exemplified concern for others. He had a willingness to help whenever and wherever he could. When I asked him, upon his retirement from the priesthood, if he would consider coming to Sacred Heart Parish to help us, he agreed, saying ‘It’s only my first week of retirement and I’m already back on the job.’”

Father Esposito was born on Sept. 6, 1933, and was the only child of the late Carmen and Reda (Keefe) Esposito. His home parish was St. Lucy’s in Syracuse. He graduated from St. Lucy’s High School and entered St. Bernard’s Seminary in Rochester.

He was ordained a priest for the Diocese of Syracuse on Feb. 3, 1958, and served as an assistant priest for St. Patrick’s and St. Francis Parishes, Utica; St. Joseph’s Parish, Boonville; St. Anthony’s Parish, Syracuse; St. Ambrose, Endicott; and St. John the Baptist, Rome.

He served as pastor at St. John the Evangelist, Bainbridge; St. Joseph’s, Lee Center; St. Anthony’s, Syracuse; Christ the King, Liverpool; St. Rose of Lima, North Syracuse; St. Mary/St. Bernadette, Cleveland. He retired from the priesthood in 2003, but continued to serve as a weekend associate pastor at Sacred Heart Church of Cicero.

Father Esposito, known as “Espo” to his friends, was an avid sports fan and enjoyed running, especially in the Boston Marathon, swimming, skiing and playing basketball, handball and golf. He was a dedicated Yankees and SU basketball fan, but his favorite hobby was to spend time with family and friends at the family camp.

Jack Estabrook, one of Father Esposito’s oldest and closet friends, spoke of the many cherished memories the two had shared together, along with several other close friends.

“He taught me many things, like handball was not supposed to be a contact sport,” laughed Estabrook. “He was a man among men. Everyone who knew him admired him and respected him. He was a legend, an icon and it was an honor and a privilege to be his friend. Espo, we love you and your memory will be with all of us forever.”

Donations in Father William Esposito’s name may be made to Sacred Heart Church, 8229 Brewerton Road, Cicero, 13039