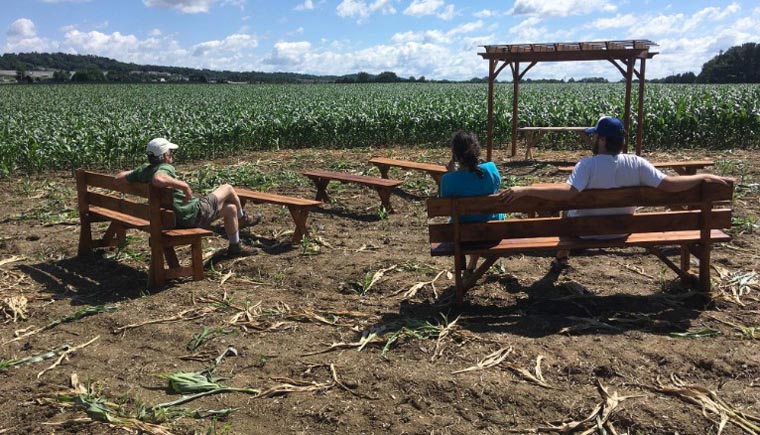 WASHINGTON (CNS) — A federal court order has temporarily stopped construction on a natural gas pipeline in Pennsylvania, a section of which is being built on land owned by a religious order and is the focus of protests.

The U.S. Court of Appeals for the District of Columbia issued a stay on construction Nov. 6 in response to an emergency appeal filed by Oct. 30 by environmental and Native American groups opposing the Atlantic Sunrise pipeline.

The motion asked the court to stop construction until the Federal Energy Regulatory Commission, which oversees the country’s energy infrastructure, conducts a more comprehensive environmental review of the natural gas pipeline’s long-term impacts and the public need for the project.

A short segment of the 183-mile pipeline passes through property owned by the Adorers of the Blood of Christ in Columbia, Pennsylvania.

“We don’t know how long the stay will last. But we do have residents who are out all over the county just seeing whether construction has stopped. We’re telling our folks to call the local police if they see work going on,” said Melinda Clatterbuck, a member of Lancaster Against Pipelines, one of the groups that filed the emergency appeal.

“We celebrate it as a small victory,” she told Catholic News Service Nov. 7.

Williams Partners, the pipeline builder, filed a motion for clarification of the order Nov. 7, saying it wanted to ensure that the flow of natural gas along the East Coast would not be interrupted.

Michael Dunn, Williams Parnters’ CEO, said in a statement that the project has been under review for four years and “is operating and being constructed in compliance with all state and federal permits.”

“These current actions by opponents of American energy are, this morning, idling thousands of workers in Pennsylvania and could delay the benefits of low-cost energy delivery to millions of American families,” Dunn added. The company expects the court to lift quickly after it completes its review, he said.

“We have felt that Williams has rushed with the whole project without due diligence. And certainly we feel that there have been numerous levels within the government that have not paid attention to the voice of the people about the dangers of the pipeline, not taking into consideration their voices,” she told CNS.

“We’re happy that the court has said, or at least is inferring, that FERC and the Pennsylvania Department of Environmental Protection has not paid attention to the environmental concerns and the questions about the public need for the pipeline. The bottom line is we felt our prayer and advocacy of so many people across the county have gotten some credibility,” Sister Dwyer said.

The Adorers have challenged in their own federal lawsuit a FERC order authorizing construction and operation of the pipeline, arguing that it violated the sisters’ right to practice their faith under the Religious Freedom Restoration Act. Their claim was denied by a federal judge in Pennsylvania, opening the door for construction to begin Oct. 16. The sisters appealed the decision.

The order has worked loosely with Lancaster Against Pipelines to resist the project and allowed the group’s members to build a simple chapel on the property. The pipeline passes a few feet from the chapel, which has become a community gathering place for prayer, reflection and meetings.

Nearly 30 people have been arrested in a series of protests and vigils designed to stop or slow construction at the site since mid-October.

Clatterbuck said the ruling gives pipeline opponents hope that their voices are being heard by the courts.

“We understand it could be short-lived,” Clatterbuck said. “Even for the court to allow this administrative stay is new, and that itself we have to celebrate because it shows a shift. And that shift is growing.”